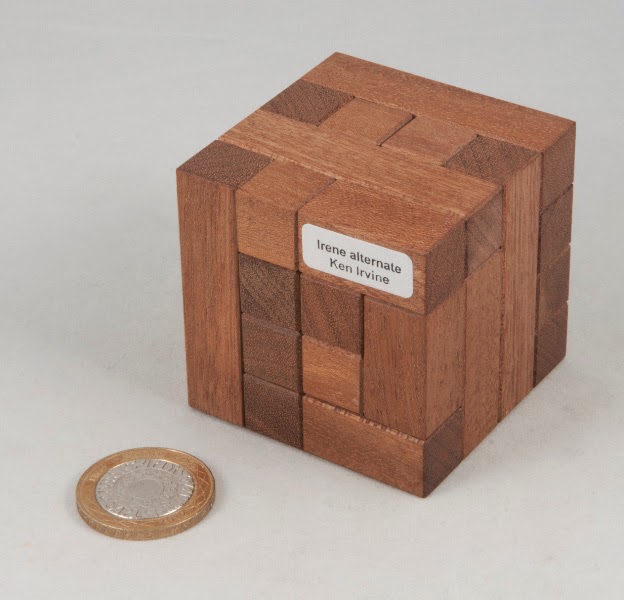 After my last blog post about Ken Irvine’s great designs, Bernhard Schweitzer let me know that we had a couple of new TICs (Turning Interlocking Cubes – Bernhard’s term) coming available, so I duly put in the obligatory order and a couple of days later a well-protected set of three new TICs arrived - two designed by Ken Irvine and a third by William Hu (he of first-base-fame?).

Irene Alternate is another of Ken’s 4*4*4 cubes that consists of just 4 pieces … which require “only” 8 moves (by my count) to fully disassemble, but it’s a really tricky little so-and-so.

Finding the first move is a bit tricky, the second move comes reasonably easily from there, but the third move is a right little sod and I only found it by a series of eliminations and deducing that there was nothing else that could happen, so it had to be that particular move, and it still wasn’t simple. You see, the tolerances on this cube (presumably from the New Pelikan Workshop guys) is fantastic, so there are no clues along the way and the moves only work if things are aligned properly. 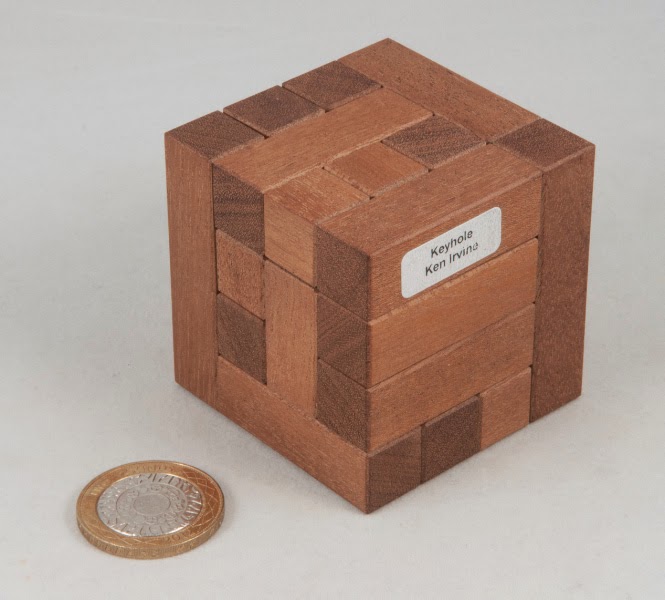 Even with only four pieces, reassembling this cube is anything but trivial – you can work out how the pieces need to sit in their eventual solved shape, but getting them there will need some creative thinking.

Keyhole is rather aptly named as once you’ve found the key, you’ll find yourself having to manipulate it to unlock the structure around it and then progressing dismantle the rest of the puzzle until you’re left with 4 rather oddly shaped pieces, and your key. :-)

Five moves to remove the first piece, and then they come apart pretty regularly from there onwards.

The first few moves are bit tricky, but once you’ve removed the first piece, it’s pretty much downhill from there … and once again, as you’d expect from Ken’s designs, getting them back together is a grand little challenge – especially since my favourite piece of puzzling software can’t help much along the way. 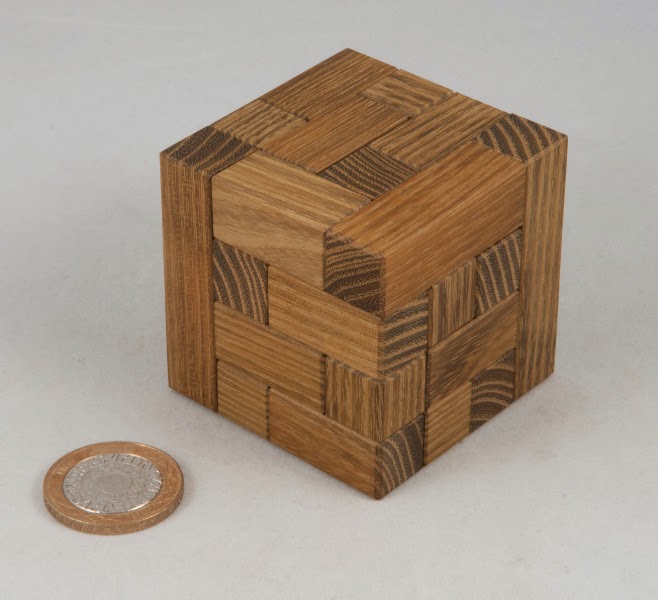 Two-Wheeled Cube is my first design from the Australian designer, William Hu. This one is particularly fiendish – it lulls you into a false sense of security because things seem reasonably straight-forward to start with – four pieces come out just like that, leaving you with a pair of interlocked wheels.

…and unless you paid very close attention to the orientation of those two wheels, you’re in for one heck of a challenge – getting them back into the right orientation so they’ll receive the remaining pieces is a pretty stiff challenge… trust me!

Three great TICs – thanks Bernhard!
Posted by allard at 07:40