Eric Fuller offers some stunning dinky little puzzles from time to time. Made from laser-cut acrylic and the little bits of wood that would otherwise get thrown out, they generally go for less than $20 but come with all of the accuracy and superb finish that you’d expect from Eric’s bigger puzzles. I’m a big fan of them, although I know not everyone shares my enthusiasm for them.

In the last round of Cubic Dissection offerings there were three of these little guys and I couldn’t resist picking them up – especially since they cost about the same as one of the other puzzles on offer.

Vortex is a deceptively simple-looking little guy. 4 little C-shaped pieces are trapped in a single sheet of acrylic in a vertex-y shape. Designed by Chi-Ren Chen, its official name on Ishino’s site is 4C Vortex. A couple of sliding moves present themselves early on and you can make yourself a bit of space to get the pieces moving around… for move around they must! The first piece requires 21 moves to release it, and you’ll need another 13 moves to get the remaining pieces free…

Oh, and if you’re guessing that there are probably rotations involved, you won’t be disappointed – there are plenty!

Once you got the pieces out, working out how to get them back in should keep you “amused” for a while – once you start putting the pieces into the frame you quickly run out of space to manoeuvre the pieces in there and it’s not hard to see why you need those 21 moves from getting the last piece into the frame until they’re all lined up and interlocking properly.

Carbo Cube is a neat little cube made up of 4 burr pieces in checkerboard colouring trapped inside a pair of clear acrylic plates around their waists. Designed by Donald Osselaer, it has a nice balance of dead-ends to get lost in and interesting moves.

Getting the two plates to move the way you want them to can sometimes be a fit fiddly, especially when the burr-pieces have been moved and you’re a bit ham-fisted like I am…

Navigate your way past the dead-ends and you’ll find that this puzzle isn’t as tough as you might have thought it will be, but there is an unexpected little way of making some extra space in there to get things moving a bit – very cute. 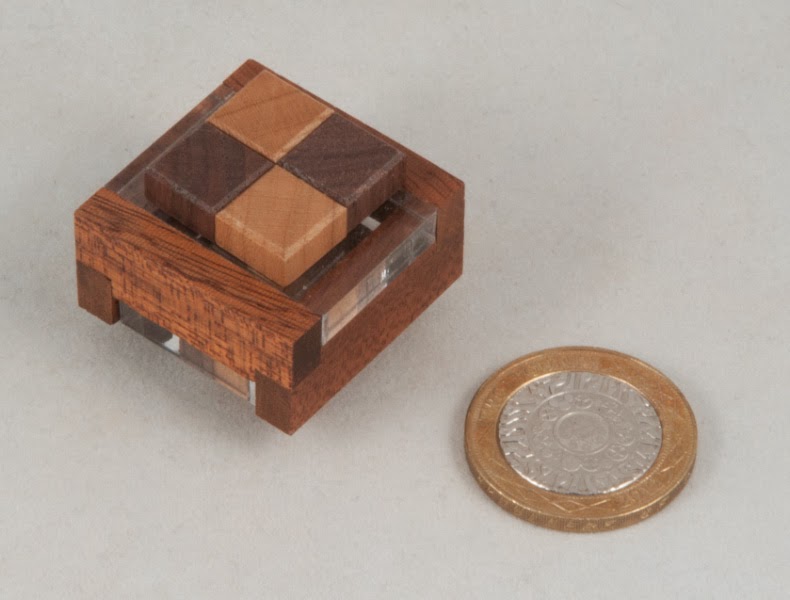 Gaia comes from prolific Turkish puzzle designer Yavuz Demirhan – four burr-pieces are trapped in a combination of two acrylic plates and a frame that allows the plates to slide at right angles to one another.

Right from the get-go there’s a lot going on – plenty of movement to explore, although most of it’s not all that useful. In fact you can get two of the pieces almost all the way out in just a couple of moves – yet the actual solution requires a full 11 moves to release the first piece…

Decent little challenge in a pocket-friendly size, with all Eric’s usual quality.

Bonus Puzzle – Eric recently started selling a budget range of “Raleigh Puzzles” aimed chiefly at new collectors who weren’t necessarily after his high-end limited edition puzzles. They’re significantly cheaper than the limited edition puzzles, but seem to be made of the same woods and while they may not be oiled or waxed like his other puzzles, the fit on them is second to none… so I’ve bought a few of them and found them to be absolutely brilliant.

One really stood out though – Ray Stanton / Akio Yamamoto’s Slideways burr is an absolute classic. Three identical pieces slide together in a co-ordinate motion to form the classic three-piece burr shape. The original was machined in aluminium and it’s gorgeous, although it can tend to suffer from spontaneous disassembly issues…

Eric’s wooden version has no such trouble – and while it might not end up being quite a “collectable” as the aluminium original – the fit of the pieces is astonishing and the friction between them is more than enough to hold them together until you apply pressure in the right directions, at the same time.

An excellent acquisition – you cannot go wrong with an Eric Fuller precision-made puzzle for $15!

I highly recommend Eric’s range of Raleigh Puzzles.
Posted by allard at 07:32