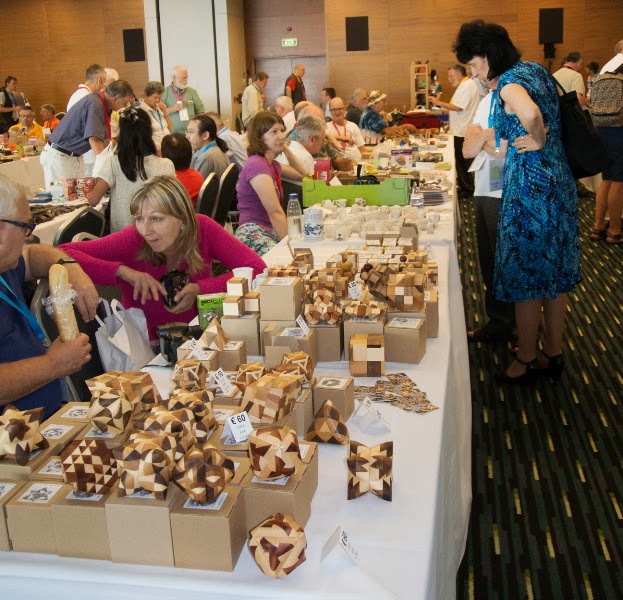 OK, it’s kid-in-a-candy-store time AGAIN! Saturday is puzzle party day – stacks of people from around the world all trying to sell you wonderful puzzles… awful, isn’t it?! At least I’ve already bagged 90-odd puzzles the day before in the exchange, so some of the pressure is off…

I join the queue and then help Steve carry a couple of crates into the puzzle room fifteen minutes before it opens to the rest of us rabble and somehow resist the urge to loiter around inside and see what’s on offer – I re-join the throng outside and we’re all released into the room at 9am sharp. I have some money in the wallet and an empty rucksack – I’m ready!

I quickly join the crowd at Perry McDaniel’s table – this year he’s ditched the bakery and turned chocolatier. When I get to the table the crowd’s already three-deep so I wait my turn unable to see a thing – when I get to the front I fork over some cash and ask for a set of this year’s toys (including a cutaway display model because there was so much demand for the single cutaway version that Perry had in DC along with the last petit four).

From there I head over to Mike Toulouzas as I suspect (read: HOPE!) that he might have some copies of his design competition entries. I get a copy of Cross Links and I’m delighted – I’ve seen it in the Competition room but haven’t had a chance to play with it yet – this way I know I can enjoy it at my leisure… and put it on the shelf next to the Gavel and a couple of other bits of Toulouzas magic.

I notice a collector holding a Dodecahedron Ball while chatting to Wil and I suspect rather strongly that he’s not going to let it go … and he looks happy!

For the next 5 hours I wander around the room from table to table finding little treasures like Dmitry’s Paperclip entanglement, a brass Ball Puzzle by Charles Perry, a copy of Eric Fuller’s Spline Box, an exploding brass ball and a copy of Meiko’s other transparent Secret Box – which despite being transparent holds its secrets rather well!

I pick up an absolute bargain from Chinny toward the end of the day when he refuses to let me pay the full price for one of his Exploding Icosahedrons. I manage to pick up a couple of puzzles I’ve been meaning to get from Jurg von Kanel too.

I spend a while at Pavel’s table and basically pick up a copy of each of the puzzles I’ve been meaning to buy from his web-site for ages.

Peter Gal had a great selection of his book-puzzles including a pile that I hadn’t seen before … and knowing that I was going to be on a cruise later in the year, I picked up a fistful of them – great holiday puzzles!

Simon Nightingale had a few of his earlier puzzles for sale and I couldn’t resist picking up another of them, not just because all of the proceeds of his puzzle sales go directly to charity.

I ended up making several trips back up to the room to empty the rucksack and refill the wallet.

At one point I chanced upon Angus Lavery and Allen Rolfs chatting about impossible card-and-bill-folding designs in the hotel lobby and I couldn’t resist the opportunity to join them and listen and learn for a little while from these two masters of the art. I got to see some of their latest amazing creations up close, including Angus’ rather impressive four-way trapdoor card – WOW! And it was great to finally meet Angus in person after swapping emails with him for a while… 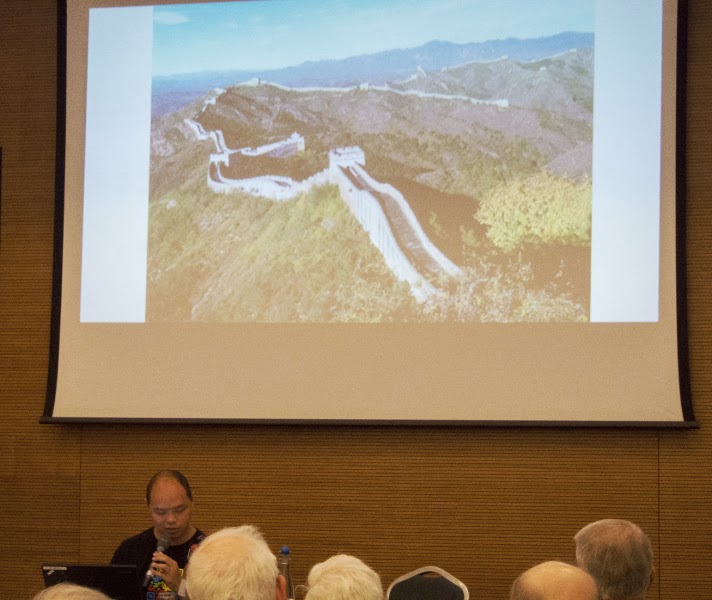 After the puzzle party, we had another series of lectures. James Dalgety entertained us with some wonderful “Whatsits” including a number of strange-looking gadgets that no-one had managed to identify yet. Otis gave a great talk on puzzling in China – focussed mainly on twisty puzzles (his speciality) and introduced us to some familiar names and some not-so-familiar faces from beyond the Great Wall. He talked quite frankly about the problem of knock-offs but also about the great developments and the promise of the huge new market in China. 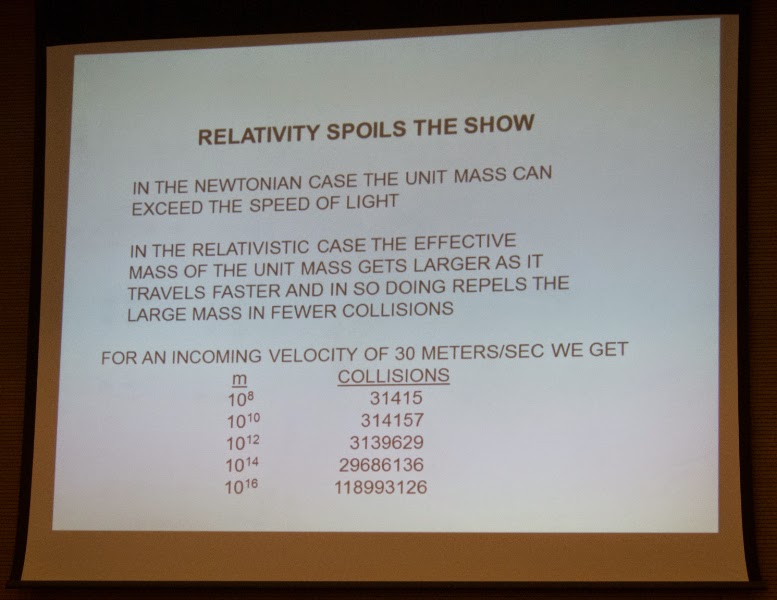 Dick Hess gave a delightful talk on how studying colliding masses might give us the digits of pi. He strung us all along beautifully developing the arguments in a simplified world of no friction and no limits right up until the end of his talk when he had to admit that the universe wasn’t big enough to give us a useful number of digits and relativity made them horribly inaccurate anyway.

Sol Golomb gave a talk on Tic Tac Toe in higher dimensions and their optimal strategies and I’m afraid I have to admit that I didn’t quite follow all of it… Tom Coutrofello bravely demonstrated some puzzle apps live on his iPad, solving almost all of the levels he randomly selected to demo! 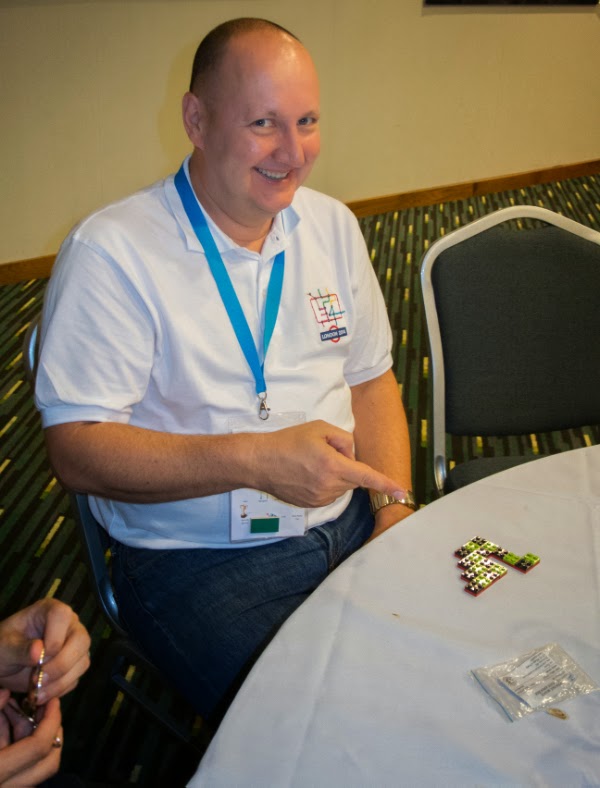 Finally the Grabarchuks demonstrated their puzzling app Puzzlium and then took a range of rather interesting questions from the floor – ranging from the rating system used for their puzzles to how they expected their business model to operate.

Another quick change of clothes up in the room and we were all back down in the ballroom for the Awards Dinner. Laurie provided the entertainment with a great magic show to get things kicked off, culminating in a huge production from a modest-sized box that had been pretty darn empty just a few moments earlier.

Laurie got the whole hosting committee up on stage to thank us and presented us each with a an engraved puzzle from Vinco and a large chocolate bottle… now I just need to make sure I do my bit on the book properly! 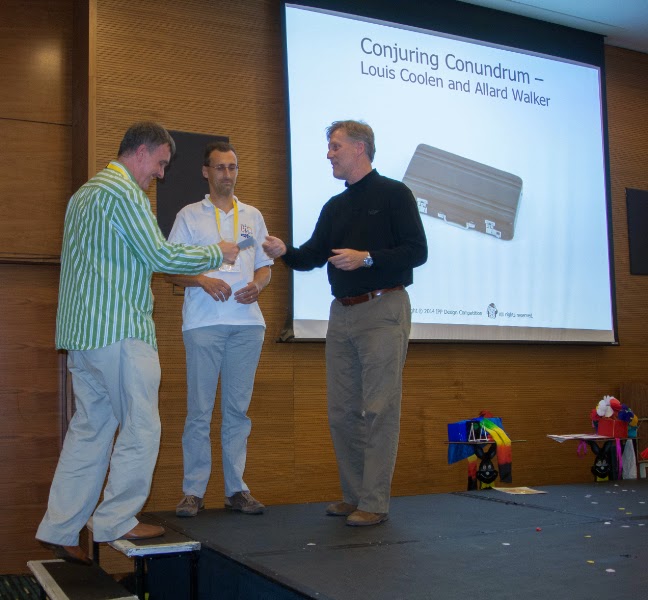 I positioned myself up front to get some pics of Nick running through the awards and presenting them to the winners and got caught by surprise when Louis and my Conjuring Conundrum got a Top 10 votes award. I managed to snap pics of all the other winners though! 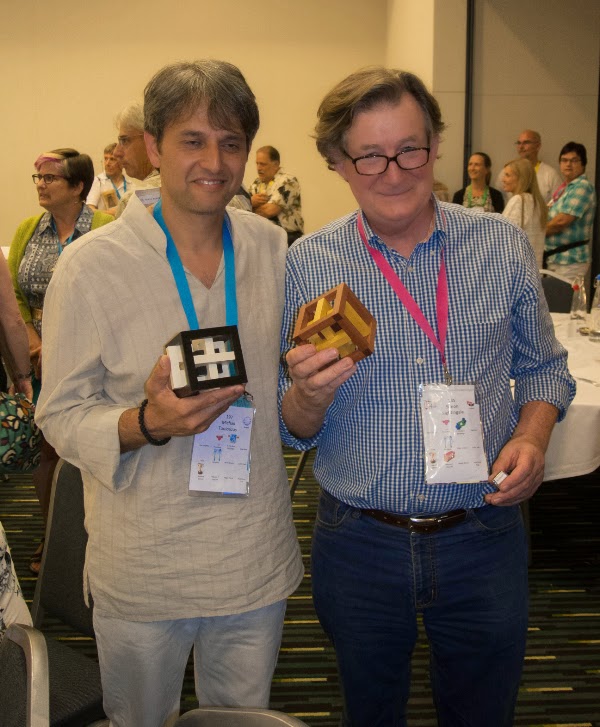 Mike Toulouzas took the Puzzlers’ Award and I swear I saw a tear in his eye when he collected his award – a hugely popular winner and a wonderfully humble craftsman … Congratulations Mike! :-) 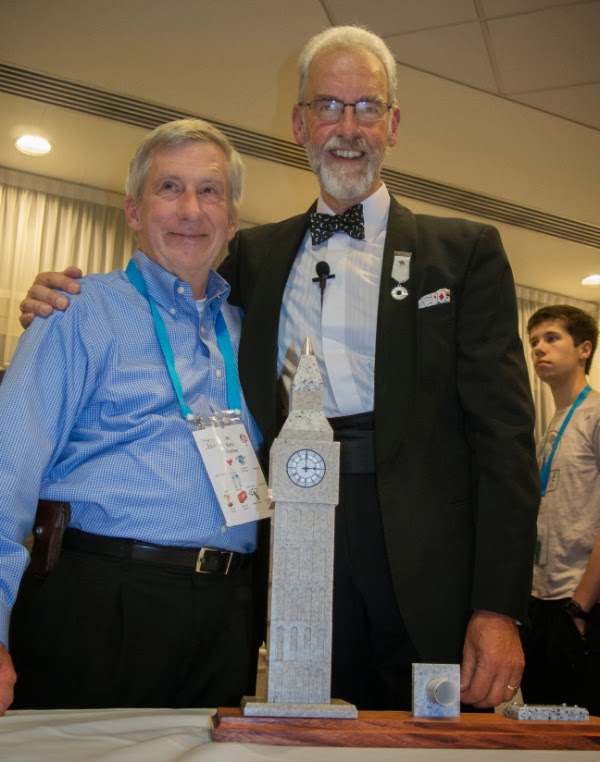 After we’d congratulated all the winners things wound down as folks began to say goodbye to friends that they might not see for another year.

Quite a few folks moved across to the lobby where Laurie appeared with a life-sized cardboard cut-out of the Queen, who was duly subjected to all manner of photographing / photo-bombing and generally high jinks – she seemed to remain amused through it all. 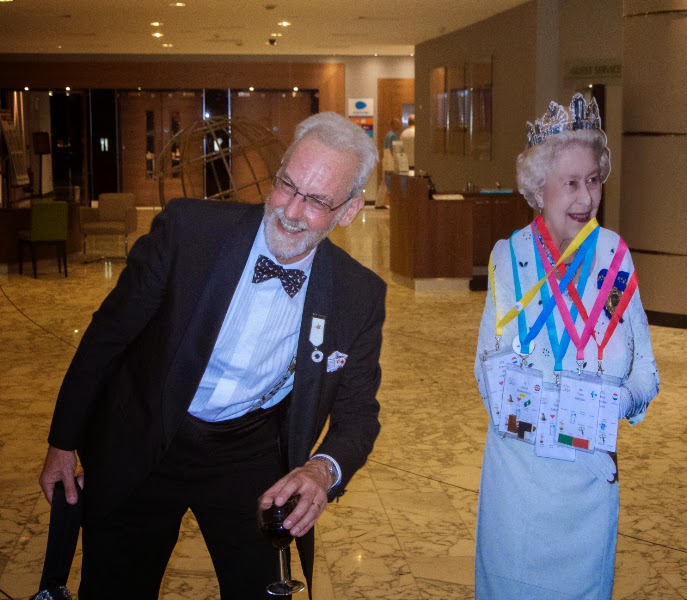 On Sunday morning we packed up everything and started saying goodbye to friends who were leaving: Peter and Lesley, and Louis headed out first thing in the morning and after we’d seen them off properly, we packed up the car and checked out of the hotel.

There were some wonderful cabinets full of memorabilia from some of the biggest names in the business – I had a great time looking over bits and pieces that I recognised from my time in magic … many, many years ago. It was absolutely brilliant hearing Laurie telling stories from his time in the navy when Dillis (sp?) the blindfolded duck was a firm favourite at sea.

I had a lovely chat with Sue Young in the bus on the way back to the hotel before yet more goodbyes ahead of our short drive north-west to Barnt Green, back home to my own bed and a heavenly night’s sleep, with plenty dreams of puzzling.