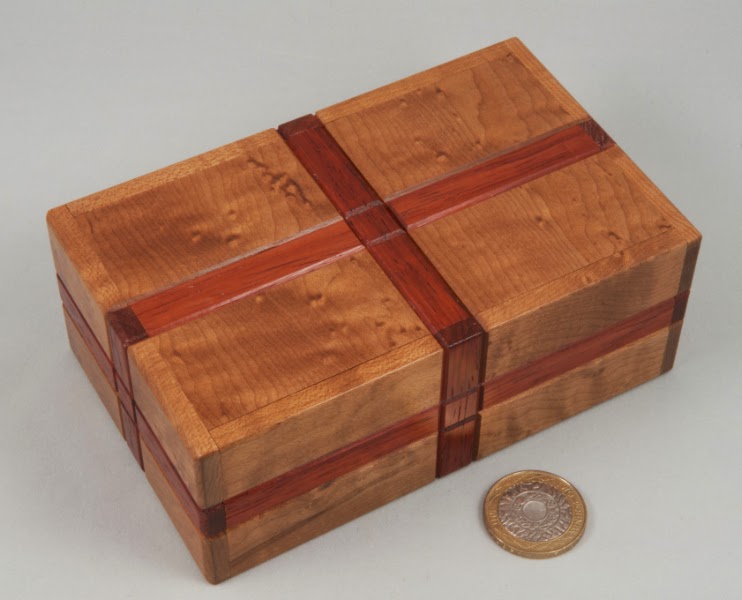 So just before IPP we had a few folks staying over and a couple more (!) arrived for a braai … and two of those people each gave me a rather beautiful puzzle box – and I reckon it’s only fair for me to share them on the blog so that the folks who didn’t make it can see them too.


I first met Peter and his lovely wife Lesley in a bar in Washington DC (OK, so it was the lobby bar at the IPP hotel before you go assuming anything…). I’d ‘met’ him in the virtual sense through the Renegades forum before then, and within a few minutes of meeting him, he’d given me a copy of the Sway Cube that he’d made to dish out to first-time IPP-attendees. Now Sway Cube is reasonably uncomplicated in a mechanical sense, but it relies on accuracy and a good fit for it to be puzzling … and Peter’s craftsmanship and tolerances are pretty spectacular, so it was a lovely little challenge.


That year he’d entered his Ferris’ Box in the Design Competition where it won a Jury First Prize Award – the ideas behind the mechanism are really unusual and surprising and once again, the execution was exceptional, making it a wonderful puzzle to play with …when he made a few extras and then sold a few of them I made sure I didn’t miss out. 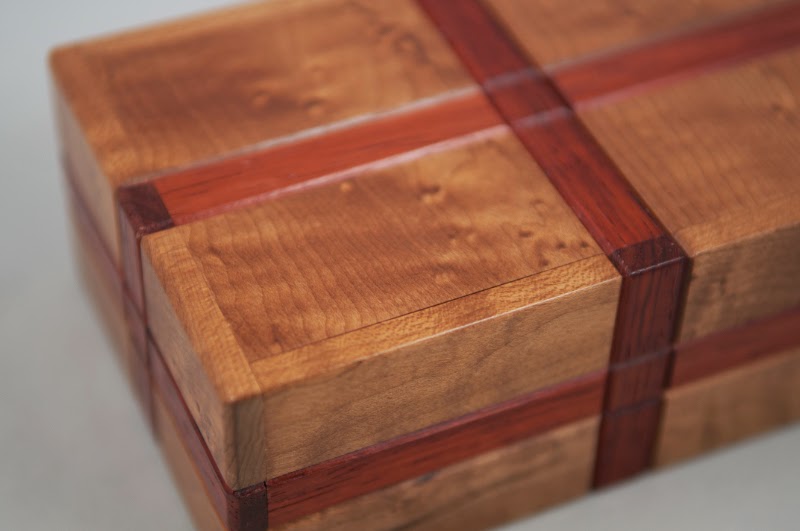 Fast forward to this year and Peter’s been busy in the workshop again… this year’s treasure is based on the Golden Ratio – [if the two sides of a rectangle are a and b, then they’re said to be related by the Golden Ration if a/b= (a+b)/a]. The ancient Greeks began studying the Golden Ratio thousands of years ago when they spotted it turning up in all sorts of strange places and noticing that figures had a pleasing form when their dimensions satisfied the Golden Ratio…


As you might expect, the Golden Ration Box’s dimensions all satisfy the Golden Ratio … in fact there are a number of subsidiary dimensions in the features that satisfy the ratio as well…and while that may have been important to Archimedes and his mates many centuries ago, I’ll be honest and say that it’s the craftsmanship and the woods that makes this such a beautiful object for me rather than (just) the ratio of the dimensions. Peter’s used Roasted Birdseye Maple for the main panels and it is simply stunning. Birdseye Maple is pretty nice to start out with, but the roasting makes the colours and the figuring significantly deeper and even more beautiful – I’ve never seen this wood before, but I’d be hard-pressed to think of a better looking one now.


OK, OK, so it’s good-looking – tell us about the puzzle!


I spent quite a long time trying to find the first “move” – while I was looking for it, I found some promising signs of what might happen later… but the first move evaded me for a long time… and when I finally started to think along the right lines, I needed a bit of encouragement from Peter to actually execute it. It is a very unusual way to start opening a puzzle box and the tolerances between the various bits mean that you have to get it spot-on before it’ll yield. 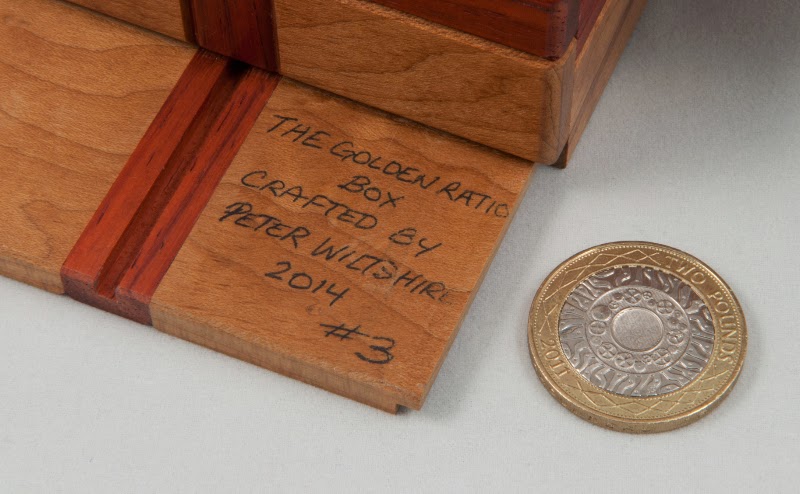 Once you’re past “that bit” it behaves a bit more like a “standard” puzzle box and soon enough you’ll have several compartments opened and the box looks nothing like it did when you first started.


Once again the fit between the bits that move is simply sublime … the only clues I managed to spot along the way turned out to be the very last pieces to move, and I thought they’d be moving in a different direction!


Peter’s craftsmanship on the Golden Ratio Box is pretty special – it’s hard to believe this is just a hobby for him, but it’s pretty easy to see why it earned him a Top Ten Votes Award in this year’s design competition – it’s a pretty special creation … thanks Peter, I absolutely love it!


Next up is Reversal of Fortune designed and crafted by Jeff Aurand – host of the annual Rochester Puzzle Picnic held just after IPP each year. Now the RPPs make our MPPs look tame by comparison – they may only happen once a year, but they seem to start on the Friday evening and last until Sunday and I heard rumours that a number of folks would be camping in Jeff’s backyard this year, prompting talk of changing it from RPP to Puzzle-stock.


Jeff was one of the contributors to the Apothecary Chest Project – an amazingly ambitious project that saw twelve people each contributing a puzzle box in the shape of a drawer that Robert Yarger then built into a fantastically complicated mechanical contraption that made up the chest itself. The project literally took years to complete but the end results are quite spectacular … with two extra copies of the Chest going for more than $10,000 apiece on Baxterweb. [BTW Peter’s Ferris’ Box was his contribution to the Apothecary Chest…] 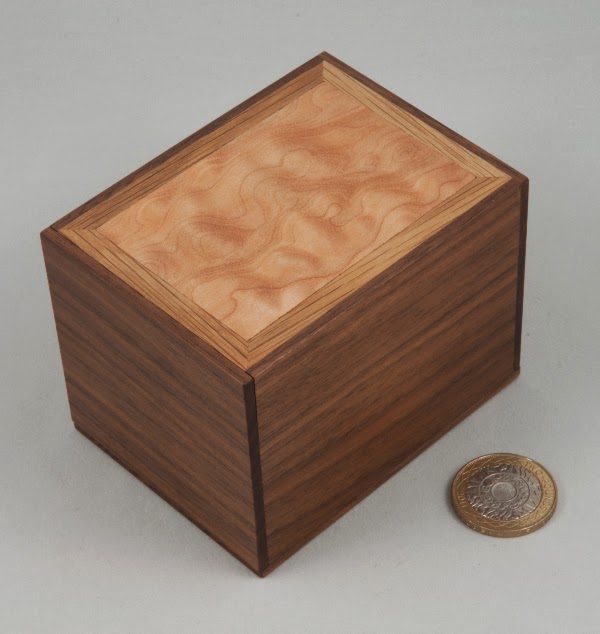 Each of the drawers in the Chest is special in their own right and Jeff’s Reversal of Fortune is no exception. Made largely in walnut, the top has a Quilted(?) Maple inlay in the centre of it that looks stunning. I’ve never come across anything that Jeff’s crafted before, and having seen the quality of this box, I cannot believe that he’s only recently started making puzzles and must believe that either I’ve been deficient in my puzzle-hunting skills up to now, or he’s just been making puzzles for himself and a few friends. This is a beautifully crafted puzzle with a very unusual mechanism that must have taken no small amount of engineering to create.


The box’s name alludes to a couple of sections in the solution – the final one being a lovely little piece of theatre in your hands – wonderfully unexpected!


The first move or two make it seem like a reasonably standard puzzle box, albeit one of them feels  little different and has a touch of a metallic feel to it… a few steps in and you find yourself needing to change direction (the first reversal). A few more moves and things start looking very unconventional, and when you open the box you know you’re not in Kansas any more! The final reveal is a wonderful surprise and caps off the series of reversals beautifully.


It’s lovely to play with a box that offers real surprises along the way - this one does that and puts a smile on your face that’ll last for a while. It’s a unique mechanism that’s been beautifully executed and dressed in a superb-looking box. Terrific work Jeff – it’s definitely something to be massively proud of and worthy of its place in the Apothecary chest. Thank you…