…a thousand Thank-Yous – many of them belated! 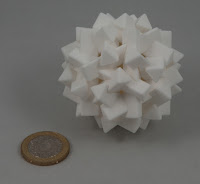 I’m a little embarrassed to say that I owe quite a few people a thank you and I’ve been rather lax about that recently… so this post is a bit of an attempt to address the issue and thank a few folks publically.

Let me start with Big-Steve – ever since he started printing large quantities of puzzles on his home-grown 3D-printers, Steve has been giving me puzzles with frightening regularity…from some potentially promising experimental ideas that turned out to have too many short-cuts to a puzzle that really should have been named the St George’s Burr after the colour-scheme he used. There were 3D-printed versions of the Peanut (remember that psychedelic one?) and his modification on the theme. His generosity wasn’t limited to just the things he’d printed himself though and a while back be gave me a copy of his i.materialise project Tripod.

Steve had a great story about a wheeze he’d discovered that meant that if you designed a box around your puzzle pieces that meant that the eventual object could be picked up as a single piece, the price being charged would plummet… so he tried it with his Tripod puzzle and discovered it worked rather well… of course since then we’ve been through all the Shapeways price-ma-geddon antics and everyone’s aware of the need to finesse your designs through these services to reduce their costs, but at the time it was quite amusing to find what appeared to be a loophole, that the 3D printing service then actually publicised to show everyone else how to do the same thing. (And, yes, these days they all offer all sorts of tools to help achieve that!) 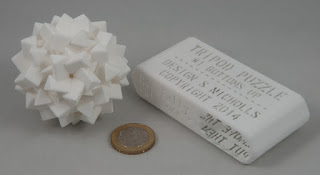 Tripod looks like an intimidating puzzle with 30 (mostly) notched sticks that you need to build into a ball-shape. When it arrives from i.materialise the sticks are inside a neat little box that needs to be snipped open to release the sticks and (usually) a small cloud of white powder. Rinse them off in some water to remove the excess powder and you’re ready to play… the notches are nicely sized to grip the neighbouring sticks securely… and one of the sticks has no notches, so it’s probably going to be a key-piece… but apart from that, there aren’t many clues as to where you might want to start…

I found it helpful to familiarise myself with the way they all fit together and to start working toward a ball-shape. Invariably at some point you’ll come up against a situation where you can’t insert the next piece because something’s blocking your way, and then it’s a good idea to come up with some sort of strategy…

I got lucky and managed to formulate a reasonably simple strategy that led me straight to a solution – but I still find the geometry rather confusing and think these sorts of puzzles are rather tough… Thanks Steve – it’s great!

The next puzzle was given to me by James Dalgety, although it too was designed and in fact printed by Steve. The JCD is a disarmingly simple-looking three piece burr where the pieces are shaped into James’ initials – no only shaped that way but they also fit together rather neatly when they’re not assembled – great design touch! 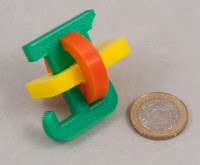 Assembling them is a lot trickier than you might think it should be… the basic shapes are exactly what you’d expect, but the little bits in the edges that stick out to make up the letters tend to get in the way, and as a result, the standard assembly simply doesn’t work… it needs careful attention to the exact shapes and sizes that have all been rather deliberately crafted to stop you doing all the usual things… find the right unusual thing, though, and you’ll have a neat little colourful three-piece burr assembled. 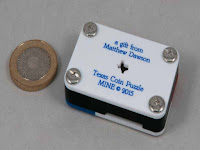 Next up is a trapped coin puzzle designed and made by Mineyuki Uyematsu for my friend Matt from across the pond. Matt commissioned Mine to make up a bunch of Texas-themed puzzles to give away to his puzzling friends and I was lucky enough to get a copy – cheers Matt!

Made up of a few layers of acrylic held together with screws, the puzzle holds a Buffalo Nickel captive, albeit partially visible through a hole on the front. With a Texas flag on the front and a map of the great state on the back, there’s no doubt about where Matt hails from… 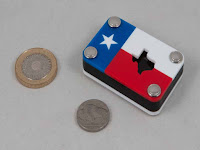 While it’s not a hugely complicated puzzle, I’ve known seasoned puzzlers play with it for weeks on end before finally finding the neat little solution that allows the coin to drop out … and there’s a wonderful little feature to it that some folks manage to miss in spite of solving and resolving it stacks of times…a lovely little detail that really didn’t need to be there, but sets it apart. 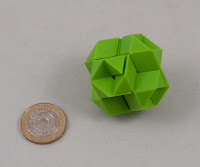 The next Thank-You goes to Chris for giving me a lovely little copy of Coffin’s Fancy This!

Back to Fancy This!… it might only have a handful of pieces, but the geometry is a little mind-bending again. It’s quite a fiendish design that combines elements of sequential assembly and co-ordinated motion, and even when you think you’ve got the hard part sussed, you’ll find there are stacks of almost-right assemblies where the pieces all go together absolutely fine and even look like the correct assembly, until you get to the last piece that seems to be the wrong way around… it amazed me just how many different wrong ways I managed to find to assemble these pieces before I eventually managed to find the right way to put them all together so that the last piece locks everything into place – thanks Chris… not just for the puzzle, but also for tempting me into experimenting with 3D printing… between you and Steve I suspect I won’t be able to resist much longer!

The final thank you in this round goes to a friend who gave me this rather unusual-looking object. It looks like an industrial two-pin plug with some rather untidy wiring sticking out the end. There weren’t any instructions that came with it so I had to try and work out what the heck the object was, if in fact it was a puzzle! (This friend collects all sorts of things so it could, for instance, have been an oddly-shaped bottle-opener for all I knew!)

When I showed it to one of my friends with an engineering background, his first question was why there were four wires coming out the back when there were only two pins on the plug – that’s probably a tip to the solution right there… surely!?

Turns out it probably is a puzzle and the object is to get it to do something unusual…it isn’t easy and the elegant method for doing it turns out to be rather neat, repeatable and not require too much physical effort – which is just as well as I’m a lazy old asthmatic puzzler. Thank you for a very special gift!