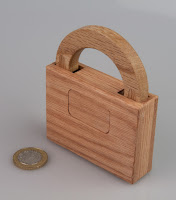 One of the wonderfully unexpected side-effects of having Louis and his family around for a few days after Christmas was Gill and I being showered with gifts from Sinterklaas that had thoughtfully been left at the Coolen’s in early December. All we had to offer in return was a few days board and lodging and some time with the new puppy – I suspect we’ll be let off!

One of the gifts was a large wooden lock in the style of Richard Hensel… although it had a few strangely familiar features on it.

Richard sold quite a few of his wooden locks on Puzzle Paradise a while back with the offer of a partial refund if you could solve it within a week – all of the puzzlers I know politely refused the refund offer, but he kept offering it! His original design went through a couple of iterations and it’s pretty much settled down now… and I’ve been meaning to buy a copy for a while now!

Opening this present from the Coolens made me grateful that I hadn’t yet, and then I realised it wasn’t quite what I thought it was at first glance – there were a few unusual features on this one (that sprung panel on the front, that thing in the slot at the bottom) that seemed familiar – as well they should because I wrote about a lock that Louis had designed a couple of years ago that shares those features – except that one was a small, white 3Dprinted version... designed to take advantage of a number of the inherent qualities of the material it was being printed in – this was made of wood!

Over a cup of coffee Louis then told the story of sending a copy of his lock to Richard and Richard then asking if he could make a copy in wood – uncharacteristically, Louis said “No” and then went on to explain about his use of the material’s inherent qualities – it’s not called white strong and flexible for nothing, after all! Richard persisted and said he had some ideas… and then a while later Richard’s wooden version duly appeared – and there was a certain degree of gob-smackedness!

Richard has done a great job of maintaining the original solving process and has only had to resort to a non-wooden artefact for one piece … and he’s working on a wooden version of that piece too!

A treasured addition to the collection – thank Sinterklaas!