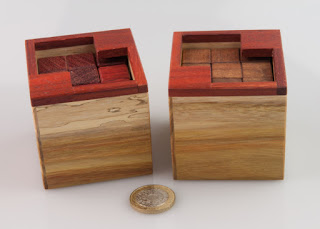 Several of my mates told me how great they were.

Kevin positively raved about them.

Jerry was pretty darn pleased with his.

I’d played with one of them a while back and it had me stumped.

…and I was duly delighted.

Let’s start at the beginning – the original L-I-Vator Cube: Laszlo Molnar entered this design in the 2015 Nob Yoshigahara Puzzle Design Competition. I had a bash at it in the Design Competition room in Ottawa and from memory it kicked my backside. 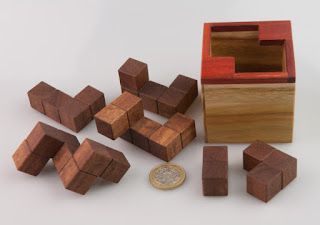 The premise is fairly simple: pack the pieces of a 3*3*3 cube into a box where the only potential issue is that a pair of opposite corners are blocked… the pieces are interesting in that there are an increasing number of cubies on each piece – from 2 up to 7 cubies – start from the largest piece, remove one cubie to form the next in the series – repeat until you’re left with a simple 2-cubie piece.

So, what’s it like as a puzzle – pretty damn good! Those two blocked corners in the box turn out to be really well-chosen! In theory there are three ways to assemble those pieces into a cube… and then each face could be uppermost, and oriented one of two ways, so I reckon there are 36 possible permutations for those pieces inside the box… and while I’ve no way of telling whether I’m right or not, I suspect that Laszlo has reduced that to a single possible solution (allowing for reflections).

I’m just happy to have found a solution!

Next up is L-I-Vator II that uses the same shaped box and introduces a different set of six pieces – these pieces only go together to assemble a cube in one way… ! … so while it might be a little harder to find a potential solution outside of the box, you know that’s how it must look inside of the box (allowing for arbitrary orientation of the cube) when you do find an assembly. 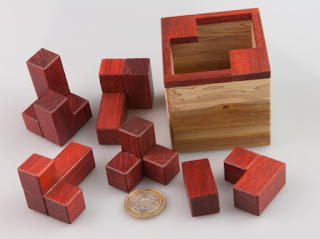 That’s got to make it easier than the original, surely?

There is a lot of tricksiness involved here too… more tricksiness than the original, IMHO.

At this point I need to interrupt myself and talk a little about Brian’s work on these puzzles – terrific! I’m a sucker for good-looking hardwoods – and the canarywood – particularly the bits with the spalting on them are just lovely… they look the business… and the fit is exactly what you want for a packing puzzle: the solution rattles, but nowhere along the way will you be tempted into doing something that you shouldn’t be allowed to – it’s obvious what you can and can’t do in terms of any tricksiness… :-) Nice work, Brian!

OK, back to the solve – this one took me a while longer than the first one… spread over a couple of evenings – ending with a wonderful moment of triumph at the end of a series of deductions – yes, dear reader – this one rewards Think©ing and deducting.

Once again there’s a set of pieces to build a size 3 cube but this time the “box” is more of a diagonal cubic bandage – picture a box with two of its opposite corners sliced off on the diagonal… or just look at the photo! 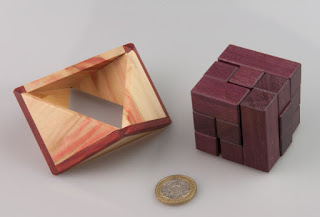 My friendly well-worn copy of BurrTools tells me that the pieces will assemble into a cube in 11 different ways… which makes finding assemblies a bit like shooting fish in a barrel… however, and it’s a big HOWEVER, finding one that will assemble inside the confines of that blocky wooden ring is tough! 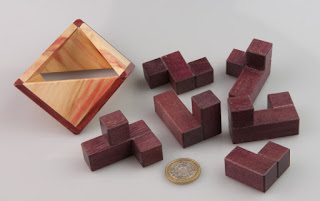 Thoughts on solving – I found it easiest to attack these head-on – play with the pieces directly inside their boxes from the get-go… establish if there are any real constraints on where some of the pieces can go and work around those… and then experiment, invariably coming up with assemblies that almost worked and then bashing through all of the possible variations on ordering, orientation and tricksiness before discarding and trying another assembly… fun puzzles to play with and even more fun to solve!