MPPXXvi was another grand puzzling weekend for me… it started with the somewhat delayed arrival of the Coolen-clan and Wil Strijbos on Thursday evening after some technical trouble had delayed the Eurotunnel trains for most of the day – at least the weather had been good enough for them to enjoy ice creams in the sun between bouts of Harry Potter…after the kids had had plenty of cuddles with the hounds they went off to bed allowing the puzzlers to descend into the Puzzle Cave (v2) for a little reacquaintance.

That afternoon the Coolen-clan went off to Cadbury world leaving Wil and I to puzzle and giving me some time to rake through Wil’s wares before there was too much further competition… enabling me to acquire a couple of delightful little Karakuri boxes – love the Tin Man!

Early that evening Laurie and Ethel arrived from down south just in time for a braai that turned out rather nicely, even if I do say so myself… before yet more puzzling ensued! Laurie introduced me to a “simple little” Angry Birds puzzle – which had me thoroughly stumped once I’d got the first couple of introductory levels out of the way… a nice set of challenges.

Wil had me tied up in knots with another of Yoshi Kotani’s little acrylic cube packing puzzles – try as I may, I always ended up with at least one piece sticking out somewhere…. Even after I was pretty sure I’d sussed what the trick needed to be… of course the following morning at the puzzle party Louis made short work of it, really short work of it – only for us to realise that one of the oddly shaped little pieces had gone AWOL…I felt only slightly less stupid at that point! (The errant piece duly turned up under Wil’s bed after they’d left, so we’ll all have to try and solve it again one day…) 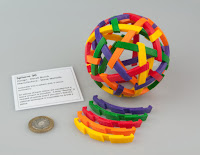 The Friday night wasn’t super late, helped by the fact that Laurie and Ethel were sleeping on the sofa bed in the puzzle cave, so access to said puzzles was a little limited.

Next morning, we fed and watered everyone, loaded up the car and managed to get to the hall before the rest of the world had arrived… laid out some tables and chairs and stocked up on drinks and soon enough the puzzlers began descending…

Chris had brought along some more of his variants on Saul Bobroff’s Nine Drilled Holes – I couldn’t resist taking a copy of his Seven Drilled Holes (same little cube except it only has 6 holes around the straight central hole – makes it look a bit different to the copy that Saul gave me). It seems that Chris has got the process more-or-less sussed and in spite of that, the polishing still takes an absolute age – they do look stunning though! (Thanks Chris!) 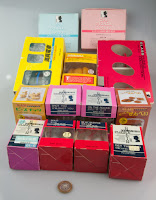 Knowing that Steve was collecting Toyo Glass puzzles, when I came across a couple of rather rare ones, I picked them up for him and then swapped them for a large number of less rare ones that he had spare copies of… so I ended up taking significantly more glassware home with me that day!

Steve also tossed in a copy of Derek Bosch’s Sphere 30 design that he’d printed in 5 bright colours – with a challenge to assemble it with many-fold-colour-symmetry… and I had a great time doing that on Sunday evening after all my puzzling friends had headed home… Thanks Steve!

Steve had also brought along a number of rather heavy metal puzzles – several hedgehog puzzles made of old engine bits, a lovely big chunky three plate burr and a metal box with a hole-and-ring maze on the lid that you need to navigate to get the key near to the padlock – glorious big puzzles that made a lot of noise – and would do serious damage to a floor if dropped! (For some reason people found it amusing to lock various important items inside the box during the course of the day...)

Many people spent a good while playing with that three-plate burr – it looked wonderfully agricultural and led all of us to believe that it would be a fairly trivial assembly – only for it to catch every single one of us out! Suffice it to say that there was a lot more precision in the pieces than a casual observation might lead you to believe – and the solution is really fun. 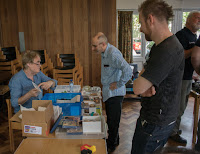 Wil’s table did a fairly good trade throughout the day and he was handing out Chinese “No Smoking” signs that he’d purchased in bulk on a recent visit to China – evidently the text asks anyone spotting someone smoking to call the number given so that the perpetrator could be appropriately fined… Wil had spotted several ways of using the digits to make up 69 and that sealed the deal for him – he duly bought 150 of them and is dishing them out to all who need an extra challenge in their lives… (Thanks Wil!)

Laurie had brought along several sacks full of puzzles for the masses to play with, including a really interesting cube assembly made up of only two articulated pieces – which made it surprisingly tricky to assemble.

Will had a simple little 2*2*2 black cube where some of the cubies were hinged – obviously the goal was to assemble them into a cube, but you’d invariably end up with a hole and some stragglers. I made an absolute meal of it before finally managing to get it into a cube… great little puzzle – must try and find a copy of that one.

I’d taken along a couple of boxes from Tracy Clemons… I’d been “Stuck in Limbo” for more than a month so took it along in the hopes that someone would spot something I’d missed… and though many tried, no-one seemed to find anything useful to do…

“Nothing But Time” on the other hand saw several people successfully solve the whole thing – the odd hint was thrown in when people spent too long down a blind alley, but generally everyone had a great time working through it and playing with the toys inside… after spending a couple of weeks inside a box due to the Puzzle Cave Upgrade Programme (PCUP for short) it was good to see it getting some mileage and generating some smiles along the way.

Ali had brought along some lovely wooden puzzles – several of which everyone was too scared to disassemble (probably wisely!) but several people did have a go at assembling his lovely wooden copy of Coffin’s Twelve Piece Separation… all unsuccessfully… similarly Steve’s soon-to-be-infamous stick and dowel assembly remained un- despite the attentions of Adin and Chris – looks like it’s going to have to come back for a third visit, Steve!

Tim had brought along a number of books and Pentangle bits for sale and he had a great day’s puzzling among the various tables of everyone’s current challenges.

In spite of having a couple of well-broken fingers, Michael managed to demonstrate his usual solving-prowess.

Lunch was the traditional mix of pig buns and fish and chips – in spite of the invitation to the traditional fish supper at my place afterwards… the local chippie is very good! 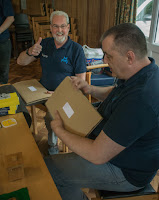 Frank had brought along copies of the IPP34 Souvenir Book for those he knew would be there and it was really great to finally have a printed copy in my hands, after donating most of my spare time to it for about 15 months – looks good, even if I have to say it myself… Frank’s done a superb job on the printing and the memory sticks – they do look smashing – AWESOME job Frank! Thank you… and we even got a thumbs-up from Laurie. Job done. :-)

Kevin wandered around solving puzzles here there and everywhere (in spite of what he says on his blog!) and was called upon to solve one of Frank’s twisties… one he didn’t even know how it should look when it was solved! Kevin duly sized it up, decided what it was and then gave it back to Frank fully solved a few minutes later… those of us who can’t do twisties (basically everyone bar Kevin at that meeting) were all mighty impressed…

Several of us had a go at a great metal burr that Ali had brought along – it consists of 6 angled metal plates that end up producing a shape like a three piece burr… only it is fiddly as all heck to assemble – I managed to assemble it with the help of another pair of hands and some frog tape, but Louis wasn’t content with my assembly as I’d ignored the numeric constraints – there are digits on each corner of the plates and the final assembly shouldn’t have any like digits together – so he took it apart and duly put it together properly… some frog tape and another pair of hands may have been involved there too…

Formal proceedings wound up just before 6pm and we decamped to our place for a large order of fish and chips, plenty cake (thanks Ethel!) and chocolate (Ethel, again and Simon!) and a lot of puzzling!

Another fine day of banter with friends, puzzling and good grub – MPPXXvi.