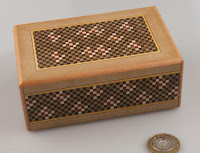 When one of the leading craftsmen in the Karakuri collective decides to spend several months learning another craftsman’s techniques in order to produce an homage to the latter, it’s worth paying attention… when the former is the bloke who’s brought us the Byway Secrets, Super-Cubi and the King Cubi, and the latter is Ninomiya-san – it’s always going to be something special… so when the lottery was announced for a few copies of this pedigreed love-child, I joined the queue like a good British puzzler.

I was lucky enough to be able to purchase a copy, and I have to say that it way surpassed any of my expectations… so this write-up will probably be more than a little gushy. I apologise in advance. 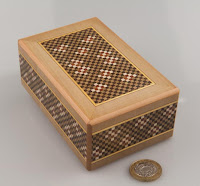 Now it may well be “just” a 7-move puzzle box, but it is easily the best looking Japanese puzzle box I have ever seen – that observation will be partly due to my somewhat limited exposure to Ninomiya’s own puzzle boxes, but I think only partly so, because this one is really a thing of beauty.

On a standard Japanese puzzle box you can usually spot the sliders from across the room – there’s a subtle break in the yosegi where diagonal lines don’t quite meet, or there’s a disturbance in a pattern… or the edges without the yosegi show an obvious split. This one’s not like that. I have defied several puzzlers to spot the breaks in the yosegi after telling them that there are sliders on each end… you cannot see them. Bounce the light off the edges without the yosegi and you can see the faintest clue to where the sliders are… these secret panels literally hide in plain sight.

The yosegi itself is vintage-Ninomiya – a pattern of square blocks where every row has exactly the same height… even where there must have been a cut for the sliders, usually a tell-tale sign – it’s indistinguishable here.

Without the benefit of any visual clues, you’re left to rely on some of your other senses – and they won’t let you down. Find the right jump-off point and you’re rewarded with a set of silky smooth movements that are so wonderfully precise they belong in a dream.

Iwahara’s tribute to Ninomiya is truly a wonderful homage to one of the great masters… and an instant favourite.
Posted by allard at 10:45