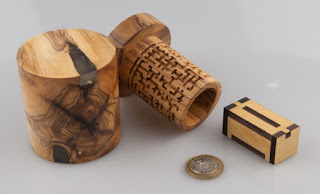 I bring you a wonderful juxtaposition: two puzzles I’ve recently added to the collection – one a gift from a friend and the other purchased from a craftsman back in the old country… both are essentially “just” hidden mazes – yet they couldn’t be more different!

Die Doolhof – literally “The Maze” in Afrikaans - is a stunning piece of craftmanship in some wonderfully figured wood – so wonderfully figured in fact, that it has lost some particularly knotty bits and Johan has had to fill them with a clear resin to maintain the structural integrity of the wood.

The central core has a “simple” (as in: no tricks – not as in trivial) maze routed into the hardwood and the outer cover houses a pin that needs to traverse the maze… Johan’s added a couple of dummy pins to the outer piece just to help throw you off the scent a little – keeping you a little off-balance while you try and imagine what’s happening on the inside. 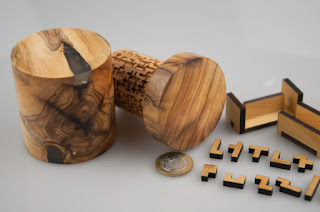 At the very start of the maze there aren’t too many different paths to explore, so you can get a little traction and feel that you’re making progress… once you’re well and truly into the maze, it’s really easy to get yourself disorientated and turned around, heading back toward the beginning once more with realising that you’re going in the wrong direction…

Persevere and reach the end and you’re rewarded with the core coming totally out of the outer shell to reveal a neat little packing puzzle that Johan’s placed right inside the core – cute touch!

I really enjoyed watching the occasional pictures and videos that Johan posted while he was making these beauties – the core started out as a hexagonal core with the maze CNC routed onto the six sides in turn… before being put in a lathe and turned rather gingerly into a cylinder… sometime with less success than others as the chisel catches the edge of the routed maze and effectively trashes all of the earlier work on that core…technique duly perfected, Johan produced a bunch of them and sold them via his website back in August last year. 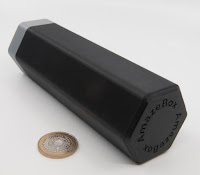 Amazebox couldn’t be more different, in spite of the fact that it too is a hidden maze puzzle. 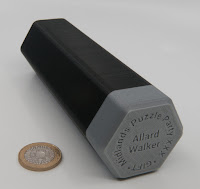 As luck would have it I didn’t have a lot of time to play with it until after Peter’s EPP where I’d seen that Louis had rated it as one of his three puzzle finds of 2017… this puzzle clearly has a lot more than originally meets the eye!

I duly settled down and had a proper fiddle around and kept finding myself getting trapped in the first quarter of the puzzle… persevering I manged to make it into the next section and stumbled across something really intriguing: there’s a little winder in the cover that allows the puzzlist to view the tiniest possible piece of the maze as you make progress – not nearly enough to be instructive as far as getting a view on the maze itself – but all of a sardine I was seeing red and green flashes through that window… and then things began to change… and I was well and truly hooked on this puzzle! 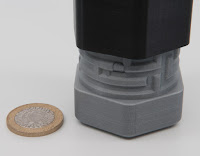 I hunkered down and bashed my way through the rest of the maze and finally managed to get the Amazebox open – and my respect for Stefan’s engineering expertise went through the roof! This guy has used a standard home 3D printer to produce a professional quality puzzle, building in some very interesting features that make the maze rather interesting (and not simple, in the puzzlingly interesting sense of the word here!) and even enable the puzzle to be reset right back to the start instantaneously – genius!

All the while leaving a massive internal cavity that could hold your secrets (or another puzzle) hostage…. The design is really clever, and the execution is superb! Thank you, Stefan, – it’s brilliant!