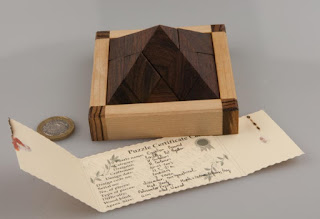 OK. So I’m a bit of a Mike Toulouzas fanboy… and I’m fine with that… because he makes pretty darn awesome puzzles.

If you’ve been reading this blog for any period at all, you’ll already know that… and you’ll know that when I get the chance to buy one of Mike’s puzzles that I don’t already have, I generally jump at the opportunity… last October I jumped, again – and acquired a lovely copy of Mike’s Egyptian Pyramid. This copy came from John Moores’ personal collection and I suspect strongly that it was one of the copies used as one of Mike’s entries in the 2004 Puzzle Design Competition – it looks remarkably like Nick’s picture of the entry - and Mike didn’t make very many of them.

Anyhow, enough of this fanboy stuff and tell us about the puzzle, eh?

It’s a handsome little square pyramid made out of Palisander sitting on a Maple tray with Zebrawood columns at the corners. While it’s sitting in it’s tray there are a number of obvious pieces discernible but there’s not exactly a recognisable pattern that might just help when it comes to reassembly… 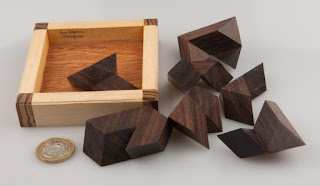 Jacques shipped it assembled (he’s a nice man!) but suggested that when it arrived I should tip the pieces out and have a go at assembly… and then he warned me that it was a properly hard puzzle.

Hunt around for some obvious positioning – like the base – weird – there’s doesn’t seem to be any pieces that might form a nice, flat, square base - and then it hits you: you haven’t seen the base, have you? You have no idea what is going on underneath this thing – but you’re going to realise pretty soon that it aint flat! (In fact, if you take a picture of the assembled pieces outside of the frame, the pyramid appears to float rather eerily in the air!)

You have seven rather odd shapes which until a few seconds ago looked quite orderly in the shape of a pyramid… now they just look like seven oddly-shaped pieces.

Ah well, if all else fails, I can leave it unsolved until the puzzle-solving-machine-named-Coolen comes visiting and he’ll put it back together for me…

Start experimenting and one piece announces itself as needing to go in a particular (albeit generic) position – and then one or two others will go together in a pleasing manner… and you can start making some progress. 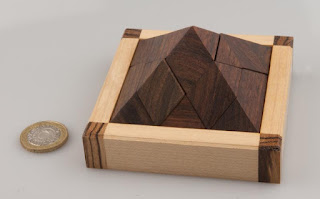 You’re left in no doubt that the pieces are seriously interlocking – nothing just rests in place – everything interlocks with something… assembly doesn’t get trivial until the very last piece – it’s a lovely dissection that seriously challenged my spatial perception – those angles are just weird!
_______________

Over the last few months I’ve foisted it on a number of puzzlers – mostly with success after a little puzzling (generally a lot less than it took me!) – and invariably with smiles and kind words about an excellent design – (another!) great design, Mike!