When we get to the ballroom the tables are all set out and ready for us to lay out name cards before we allow a largely peaceful bunch of puzzlers into the room to get set up and ready for the big exchange… the table of exchange puzzles to be donated to the Lily Library gradually fills up until there are roughly 78 puzzles there, Nick does his usual introductory remarks to remind us all that this may be the only time we get to chat to some of our friends from around the world so we should make it count, and then the exchange is officially opened for business.

Louis does a brilliant job of assisting me again this year, following me around with a bag-full of my puzzles, keeping an eye out for people I haven’t exchanged with yet, hanging onto the exchange puzzles I receive and taking some excellent pictures of the exchangers and their puzzles in between all that… truth be told I don’t realise just HOW GOOD a job he’s done until I get home a couple of weeks after IPP and download all the pictures he’s taken onto my PC… and they’re a brilliant set of memories of the day’s events – Thanks Louis!

There are a couple of highlights of the exchange, and oddly they both feature Big-Steve. The first is to do with Big-Steve’s exchange – the Hokey Cokey Lock. Now in his infinite wisdom (Yup, that’s definitely the word!)  Steve thought it would be fun to dance the Hokey Cokey with every exchanger as part of his exchange schpiel… and so he did…and I reckon that allowing for the occasional double exchange, he must have danced the Hokey Cokey about 70 times – that is pure dedication to your art…., or lunacy.

The second involved a lonely looking table in the corner of the ball room with a list of exchangers on it and a name card for Chico Banan. 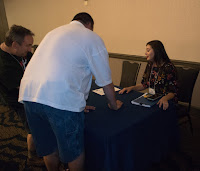 Now I’m not sure if Big Steve had noticed this earlier in the day, but at some point he was called over to chat to Chica Banan, Chico’s wife, who was desperate to track down her husband, and having seen Big-Steve’s posting on Facebook a couple of days earlier, she was keen to ask Steve whether he knew where Chico was… 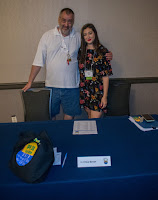 Now all of this took Big-Steve a little by surprise and he seemed to keep asking Chica over and over again “Who are you really?” and occasionally interspersing “I hope you haven’t been listening to these two” – pointing at Nick and I before reverting back to “Who are you really?” – the pair posed for a couple of pictures before Steve proceeded to try and hide underneath the table for some reason.

After the exchange I managed to meet up with Tom and acquire a couple of his latest creations – several of which will no doubt appear in this blog in the near future as they’re excellent puzzles… I was particularly delighted to get hold of a copy of Goh Pitt Khiam’s Ship in a Bottle from Tom after playing with James’ copy earlier in the year… brilliant puzzle!

I manage to attend most of the lectures in the afternoon and find Tyler’s talk on Puzzling Learnings really fascinating, and I really appreciate Dick's and Nick’s tributes to Markus. 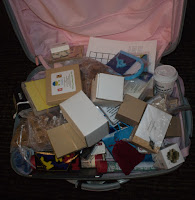 I spend a little time before dinner running around playing Father Christmas and giving away copies of my exchange puzzle, and am chuffed that so far I’ve managed not to sell any of them… and I’ve managed to keep my tradition of giving puzzles to as many of the newcomers as I can, alive too.

At the banquet I get to spend some time chatting to John Partridge about his puzzle designs, and Neil and I end up chatting to him about his latest design, Model #360. We’d both managed to solve it reasonably quickly and this appears to make John resolve that he needs to make sure that his next puzzle will take us longer to crack open… we don’t really try to dissuade him much. We’re all royally entertained by some excellent magicians, including the brilliantly talented Nathan Phan from Glasgow,  and Scott Owen, whose sleight of hand was achingly good.

After the formal entertainment, Ken brings out some toys for us to play with (tops and poppers!) and soon afterwards someone brings out a pile of tongue depressors and the lads begin making stick bombs around the table, much to everyone’s amusement.

At some point someone in the group wonders out loud whether it might be possible to make a stick bomb and insert it under a hotel door and leave it armed… a little experimentation convinces us that it should work and we speak no more of it.

There’s a little more puzzling for me in the Design Competition room – I totally fail to solve Turf in a Box.

In unrelated news, long after I’ve retired to bed, apparently Big-Steve heads up to his room to collect something and returns a little ashen-faced and enquires whether anyone would like to tell him about what he’s just found in his hotel room... apparently there was some sort of stick bomb in his room that went off as soon as he opened the door – rather unexpectedly, wouldn’t ya’ know.  There weren’t any witnesses. He probably made all that up…

After a quick breakfast Nick spots that the ball room set-up isn’t quite right and we have way too many tables for the puzzle party – unfortunately the hotel folk have used the diagram from the Exchange instead of the Puzzle Party… a bit of quick thinking and we whip out a couple of rows of tables and magically have virtually the correct number of tables with minimal bother, allowing us to lay out the name cards and let the sellers in to set up.

At the appointed hour we allow the orderly stampede of puzzlers into the main event and lots of commerce ensues. It’s fun to see the wide-eyed greenhorns seeing all manner of wondrous items freely available for sale and then being given puzzles by strangers just because they’re there…

I notice Steve asking random folks if they know anything about the things he found in his room the night before - surprisingly, no-one owns up to knowing anything.

Ethel has a table filled with wonders in need of a new, loving home from Laurie’s collection – and I find a couple of items to add to my little hoard. Pavel has his usual wonderful spread of things, including copies of his new Punana Split group table puzzle hunt that I’ve been meaning to pick up.

There’s plenty of action in the puzzle party and unlike previous years, the action continues literally until the closing bell and I find myself needing to herd people out of the room in order to allow the hotel folks to get set up for the evening’s dinner.

I give Gill a hand to get their room sorted for the inaugural SOAP Swap where 18 of our crafty partners are swapping handmade items with one another in more or less the same way that we’d swapped puzzles the day before… I’m allowed to hang around and take a few group pictures of them before I’m banished from the room on the grounds that I haven’t got the right icon on my badge.

After the puzzle party room had been cleared, it seemed that pretty much everybody had simply decanted themselves into the Design Competition room for some final solving and voting for their favourite puzzles.

Once again I manage to attend some of the lectures between chores and really enjoy Jamy Ian Swiss’ talk on Monte Carlo cons. Bob Hearn’s talk on the unexpected appearance of a new form of fractals coming out of the States of 2D twisty puzzles is fascinating.

Somehow we get the Design Competition room cleared – have you ever tried to get between a horde of keen puzzlers and this year’s best new puzzle designs- so we can turn the room into the shipping office for puzzlers needing to ship their latest acquisitions home rather than carry them.

I grab a quick shower and dress for dinner – it’s wooden tie night – before heading back down to the shipping office to move all the nicely packaged up boxes into the organisers’ office for the night. Nick and I sort out some of the logistics for the evenings’ festivities and we get to spread a little extra love around in the form of table puzzles donated by Allen Rolfs and Thinkfun. 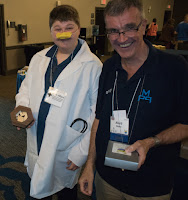 The Awards Dinner starts out on a great note with some magic from Todd Reis. One of Todd’s effects involves a number of volunteers up on the stage who get asked questions about their puzzling preferences and Brian Menold gets some loud, if slightly isolated, cheers for getting in an unexpected tongue depressor reference. Nick continues on the theme later with a mention of Chico Banan in his announcements for the evening – some awesome shout-outs in there to the little bits of silliness sprouting from the MPP… that have travelled around the world and even found a home in the centre of the IPP. That’s pretty cool…

I get to introduce the first ever non-male IPP host and the host of next year’s IPP,  and they both well and truly whet our appetites for upcoming IPPs. Nick rattles through the Design Competition winners and I’m delighted when Volker Latussek’s Casino ends up with both the Jury Grand Prize and the Puzzlers’ Choice Award. Frans takes over briefly to thank the hosts and asks Kagen up on stage to hand over the host gifts he’s been commissioned to make – there’s a lovely little comic moment when he drops mine on the floor just before he gets to me… it’s fine! I get to formally thank all the wonderful folks who’ve volunteered to help out across the last few days before Nick invites the committee and organising team up on stage for a small gift and a large round of appreciation from a room full of happy puzzlers and their families… Neil gets a bit of a surprise when he’s included because he’s put in a massive amount of help and literally always seemed to be around and eager to lend a hand – Nick may have referred to him as the apprentice’s apprentice, but I think he’s already way more important than that! Cheers mate. :-)

With the evening’s formalities winding down the sad job of saying goodbye to everyone begins – it seems to take longer and longer each year to get around everyone that we need to say goodbye to… but that’s probably a good sign.

Back up in the room we spend several hours packing… knowing that first thing in the morning we’d be flying out to Boston for the second leg of our adventure.