(Yikes - almost three weeks since my last post - that's going to drag the average down! ... I won't bore you by telling you that I've got some projects going on in the background that are taking up a lot of my spare time and robbing me of most of my puzzling time... but I will try harder to put stuff up here!) 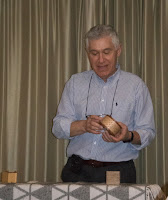 Just after New Year the Coolen-clan popped in for a few days and their visit just happened to coincide with Peter’s annual End of Year Puzzle Party, so Louis and I headed south-east for an afternoon/evening of banter with our mates, good food, some magic and the odd puzzle.

The drive down was lightened by the ongoing battle between the car’s sat-nav and Google maps – they agreed on the quickest route, but Google reckoned it would take about 45 minutes longer than the sat-nav was prepared to countenance… turned out Google was right with the sat-nav regularly adjusting its estimated time of arrival until it grudgingly agreed with the time that Google had predicted the day before. We got there bang on time – which tells you who I believed when I set out… 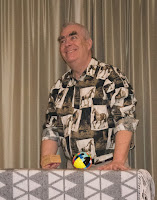 There was already a bunch of puzzlers in residence so we fished out our slippers and settled in for the afternoon. Peter and Katja made sure we were all well-caffeinated and snacked up before letting us loose to catch up with old friends we hadn’t seen for weeks / months / since the same time last year.

Wil had his customary collection of plastic crates full of wondrously puzzling items and he’d brought along a couple of special items for me as prizes for my Annual Puzzle Puzzle – how else can I find puzzles that I’ll know my winners don’t already have?! I spent ages trawling through all the crates and ended up finding a number of excellent recent MINE creations – some of which are still puzzling me weeks later! I forked over some Euros and moved on to Ethel’s crates where I spotted a couple of highly collectible things that I convinced some of my mates to buy from Ethel – everyone seemed happy.

Joop had brought along a bunch of leftover DCD 2018 puzzles that he was insisting on giving away to everyone, so I help him out a little. (Thanks, Joop!) Peter tried hard to relieve himself of a number of spare PerplexCity cards (remember those?!) during the course of the day, resorting to physically foisting them on people at one point – could they become the new tongue depressor?

After a suitable amount of general chit-chat, Peter herded us all into the lounge for the traditional presentations where we all get to tell our mates what we’ve selected as our Top Three Puzzle Finds of 2018… and why we’ve chosen them. This time we presented in reverse alphabetic order, by surname – so I was up pretty early.

My picks this year were:
Gordian Knot by Robert “Stickman” Yarger - I’ve been hunting for two numbered Stickman puzzles to complete my collection for a while now. This year one of those unicorns found me and I was delighted to add it to the hoard. A crazy-complex network of interacting pieces in the shell hide a tool to unlock the final chamber. Definitely a puzzle that leaves you astonished at the mind that designed it, and the hands that created it. 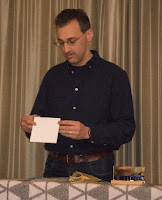 Depressing by Ken Irvine - Somehow 2018 became the year of the tongue depressor. Several talented puzzle designers stepped up to the plate and brought us a tongue depressor puzzle. Ken Irvine designed my favourite: a 2*2*2 cube with interfering planks made of surgically-reduced tongue depressors. In spite of the small number of pieces, it’s a fiendishly difficult puzzle.

Mini Maria byBerrocal - Bought from the designer’s sons after a guided tour of the Berrocal Foundation’s workshop in Villanueva de Algaidas, Mini Maria is the first Berrocal in my collection. Not only is it a fun puzzle with wonderfully organic shapes, it will always remind me of an excellent long weekend in Spain with wonderful friends, good puzzling and lots of belly-laughs.

…and then, if none of our Top Three is commercially available, we’re allowed to nominate a fourth puzzle that is currently commercially available – and I nominated the HoKey CoKey Lock by Ali Morris - In his infinite wisdom, Steve Nicholls decided to turn his exchange at IPP38 into a little piece of performance art - seeing Steve perform the Hokey Cokey for three hours straight was one of my IPP38 highlights. The puzzle was definitely one of my favourites in the exchange – everyone knows how you open a lock – except you don’t know how this one opens. A truly unique, fun, new puzzle lock from the mind of Morris. 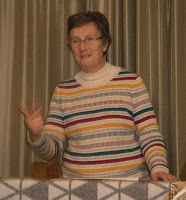 Quite a few others presented Ali’s HoKey CoKey Lock in their picks, in fact it ended up being the second most coveted puzzle of 2018 – only beaten by Volker Latusssek’s Casino which had also won Puzzle of the Year at IPP38. (I told you it was good!) 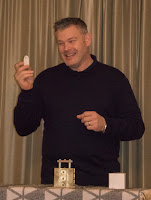 Rainer Popp’s EPIC T11 was another popular choice, with several people lugging their 2 kilogram lumps over to Peter’s house to talk enthusiastically about them – thinking about it, 2018 was a pretty special year for puzzles, and in particular for puzzle locks – the T11 kicked things off at the start of the year with a very big bang, Shane’s Firestarter was really innovative and the HoKey CoKey is guaranteed to put a fat smile on your face, EVEN if you didn’t get to see Steve’s exchange dance first hand… and those three all came within the top four most coveted puzzles of 2018! Shane’s other creations also got mentions, as did Louis’ 2018 Tricklock… does that make 2018 the year of the puzzle lock? 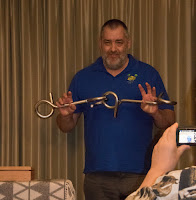 One particularly memorable bit from the presentations was Big Steve presenting his bonkers-sized disentanglement puzzle from Japan, weighing in at 6 kilograms – “more of a workout than a puzzle, really”– and one or two folks taking photographs of the event asking him to hold it up a little higher while they laboriously focused and zoomed and checked their camera’s settings and carefully framed their pictures, before eventually snapping a quick pic, just short of Steve bursting an artery.

After the puzzle presentations Clive delivered an excellent magic show with his usual slightly self-deprecating politely aggressive patter, keeping us laughing while absolutely blowing our minds with his magic.

Somewhere in between all the presentations while we were all just hanging out in Peter’s lounge, we found ourselves having to explain where the whole tongue depressor thing had come from, just who Chico Banan is and why there are so many inflatable bananas involved. Between Big Steve and I we manged to tell most of the story, but others helpfully chipped in every now and then when we glossed over a small detail that might just be embarrassing – so it all came out in the open… much to the amusement of those who’ve thus far managed to avoid the curse of the tongue depressor… although I suspect that Steve may well have managed to drag a few new converts into his game by secreting a few spare tongue depressors into their crates before he left…

Tim Rowett had brought along a massive collection of Klein bottles and Mobius Strip related paraphernalia and he gave us a wonderful canter through them all, along with several pointers to where many of these items were still available (see http://www.kleinbottle.com/ for instance – you gotta love Clifford Stoll!).
After the presentations people decanted into the kitchen in shifts to help themselves from the wonderful buffet that Peter and Katja had laid out – everyone always seems to find exactly what they were hoping to eat – and more than enough of it – there’s always a wonderful spread!

Somewhere around 8pm we said our goodbyes and headed north-west – taking home significantly more puzzles than we’d arrived with – another fine EPP disappears in the rear-view mirror. 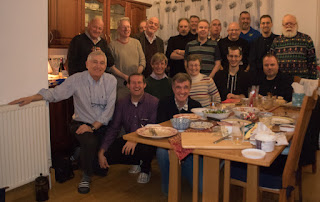