Friday night saw me collecting the puzzling patient from the airport… we’ve been forced to change his name this time to protect the innocent: he’d been prepping some Tricklocks for sale a couple of weeks earlier and had contrived to pass a Stanley knife through a vital tendon, resulting in a serious infection, surgery, the best part of a week in hospital and a scary tale of how it all unfolded which I got in the car on the way back to the house… he’s doing a lot better now, but still had a finger bandaged and his hand trussed up in a sling to stop him doing anything silly… and he’s still solving puzzles better than me!


Back at the house, he good-naturedly ran through the tale again for Gill before we feasted on home-made pizzas and disappeared into the puzzle cave for some puzzling…in spite of being through the wars recently and travelling most of the afternoon, he still solved more puzzles than I did and stayed up later than me… I am not worthy… :-)


Next morning after some croissants we headed down to the hall where we managed to get everything set up before the gang arrived. 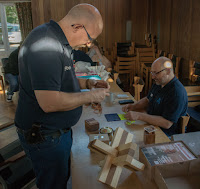 We had a reasonably small, select bunch of puzzlers this time: Dave made the trip down from Up North, as did Frank, an Ed navigated the public transport system successfully from London to Barnt Green where I collected him. Big-Steve and Ali did car-pool karaoke down (up?) the M40 with Ali’s daughters in the back of the truck. Shane, Chris, Dale, Wee-Steve and Rich rounded out the gang for the day.


Dave had brought an enormous box of disentanglement puzzles along for folks to try and during the course of the day I saw several people stepping up to the challenge – most slunk away defeated by the looks of things. (Before you ask, I didn’t even try – I know my limits!)


I enjoyed foisting my new restricted packing puzzles on all comers – Katsumoto-san’s Packing Puzzle 4P went down particularly well with everyone going through the same set of emotions as they tried to solve it: “that was quite easy” after solving the first side, followed by a long-ish pause and some muttering before eventually a “Niiiiiiiice!” as they solved the second side.

I’d taken most of Juno’s suit cases along for Ed to play with and he steamed through them rather rapidly (except for the Club case which proved a leap too far for someone not able to see what’s going on there…) – I was somewhat humbled when he rattled through the diamond case in about a week less than it took me! 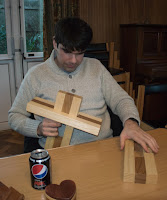 Dave had brought along a huge board burr that his rather talented cousin had made... we couldn't resist giving it to Ed - and he did rather well on it.


Big-Steve had ordered a bunch of Japanese goodies for Ali and I and was playing Santa Claus to two expectant puzzlers. We each ended up with a new Endo-san puzzle, some tray puzzles from Osho and a new rather tricky Yamamoto packing puzzle. (He even had a spare copy of the Endo puzzle that I was able to purchase as an early birthday gift for the patient.) Thanks Steve!


Someone had brought along a set of the Yuu Asaka puzzles so I finally got to have a bash at Wave 7 – I spent a while convincing myself that some strategies wouldn’t work and then started getting quite creative – coming pretty darn close to getting everything in at one point, and just about giving up – at which point the patient says “let me just try something” and promptly solves it by moving a single piece…  I let out a little primal scream (and swore a bit!) – he is an expert solver… no question about it. [Excellent puzzle, by the way – well worth adding to the collection – hopefully I will be shortly!]

We did the usual trek up to the pig-bun stall on the high street and duly returned for our lunch break to find Gill and the hounds had walked down to come and say hello… so the hounds were fussed and pig-buns offered (to Gill, not the hounds!). How the heck some of those guys managed to hoover up all of that mixed meat and chips I will never know!


Frank had brought along a few well-gummed-up metal puzzles purchased off the inter-web – all apparently made by a tool-maker for his own amusement. There was a six-piece burr, a kumiki cube and an impossible dovetail joint – all pretty much jammed shut and not really wanting to budge. Chris took them on as a personal mission for the day and duly disappeared into the kitchen with them, some boiling water, a pile of serviettes, some washing up liquid and a small brass brush he produced from his rucksack o’ wonders.


Over the course of the next hour or two I witnessed Frank and Chris both remarking on the amazing heat retention capabilities of the steel lumps they were attempting to dismantle and clean up – time and again they’d pick something up and then immediately put it down again and remark on how much hotter they were than they’d expected….after bathing them in boiling water…

By the end of the process Frank had a set of puzzles that could be dismantled and he and Chris didn’t have too many blisters.


Several people had a go at the new Endo-san puzzle and I suspect that more than a couple managed to complete it – although “someone” helpfully disassembled mine so that I’d have the full joy of having to find the right assembly. Thanks! 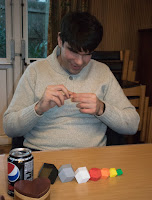 Rich had brought along a sub-set of happiness and Big-Steve spent a little while half-heartedly trying to dismantle one of them, remembering the unbridled joy of dismantling Kevin’s set last time around, before grudgingly admitting to himself, and to us, that it would probably take him longer to take them apart than for Rich to reassemble them – having sucked all of the fun out of the mischief, the plan was abandoned.

I'd taken along the goodies I'd recently acquired from Lee Krasnow - including a set of nested Pennyhedrons which we handed to Ed... who hadn't ever seen a Pennyhedron before. It didn't take him long to unravel the set and line them up in front of him before he proceeded to reassemble them all - although one wag did try removing one from the queue in the hopes of reintroducing it after he'd popped the last one together - he noticed, and it was duly replaced. Ed reckoned it was rather therapeutic unwrapping them all and then reassembling that set.

I'd also taken along a set of Cluster Buster variants that Lee'd printed... at one point I'd jokingly said it might be funny if they were reassembled incorrectly - only to discover some time later that that was what my friends had already helpfully done for me... notice things don't look quite right in there? 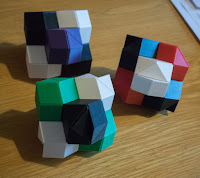 Sometime around sunset we all headed up to the house for the traditional fish supper (or chip supper!) and a little more puzzling. Ali’s girls got to know the hounds a little better while the boys all grabbed a puzzle or two and chilled.


Rich kindly dismantled my copy of Juno’s T-Slot burr, something that hadn’t been done yet… a couple of the lads tried reassembly, but it turns out that’s rather a lot harder so it ended up staying in bits.

Given that Ed had fared rather well on the enormous board burr earlier in the day, we decided he hsould have a bash at the man-sized disentanglement in the puzzle cave - Blind puzzler 1 - Massive disentanglement 0. 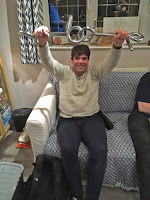 At one point I encouraged Chris to take an old Kamei burr apart and he got a little scared when he saw quite how many pieces there were in it… but a few minutes of calm examination and some words of wisdom from the patient saw him get it back together fairly quickly… clearly he needed a bigger challenge!


…and as it turned out I had one for him, and several others! I got a copy of Simon Nightingale’s Slide-oku from Tom Lensch a while back and it’s been on my pile of things to solve for a long time, so I challenged the lads in the puzzle cave to solve it for me… and soon enough we had Chris and Rich doing a lot of the heavy-lifting, Frank and Louis the patient chipping in and me watching in amazement. It took a good while, but they managed to deduce a fair amount, then called on the help of an inter-web Sudoku solver, realised that wouldn’t quite work and then fell back on the little grey cells – remembering what sort of a puzzle this is!  Late on Saturday night there was a little cheer as they convinced themselves it had been solved… quite impressive stuff… I have taken a pic of the solved state and am sorely tempted to glue everything in place now – it’s not a casual puzzle! (Thanks guys!)


Sometime around 11pm the stragglers decided they should probably head back to London / up north – and I crashed.


There was some more puzzling with the patient the next day before I dropped him at the airport where KLM whisked him back home again. 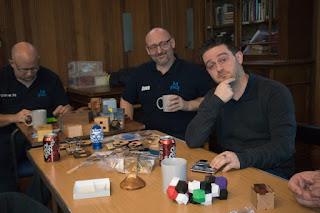