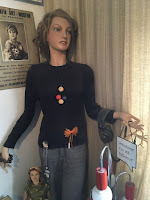 This one started with a little more excitement than I’d have preferred!


Gill was rather kindly dropping me off at the airport first thing in the morning and I’d offered to pay for the parking so she didn’t need to get out in the rain... on the way to the pay station I discover I’ve left my wallet at home - no cash, no cards - but I’ve got a passport and a boarding pass... Gill lends me her cash card and some sterling and I engage brain, arguably a little later than I should have that morning!

Once through security I used Gill’s card to draw some Euro’s and reassess the situation... it’s probably OK - you’re just missing a bit of a security blanket... My mind settles down quite a lot when I recall that I’ve stashed a pile of Euros in my carry-on, so I’m not totally skint anyway.

The flight gets delayed a bit ‘cos it’s blowing a hoolie and we do indeed bounce around a little on the way up, and down... the train ride to Eindhoven is a lot less bumpy and I actually managed get a couple of blog posts typed up on the old iPad. (Good news!!! More drivel on the way!)

Louis finds me at the station, I get checked in at my hotel and we wake Wee-Steve up (he’s had an early start to the day apparently, so he’s grabbing some zeds in the early afternoon). Louis hooks us up with some lunch at chez Coolen and we get a little puzzle-time in before Mieke and Laura arrive back from scouting the King’s Day flea markets. 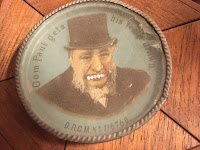 We all pile into the Coolen-mobile and head over to the next town for a seriously impressive escape room at The Space... we don’t quite manage to avert the start of World War III (sorry about that!) - but we did get pretty damn close to it... The Launch is definitely to be recommended - the production is incredibly good, we literally all found ourselves staring at the set in awe at one point - they’re set up in an old grain silo and you will pretty much convince yourself you’re in a Cold War ICBM silo... it’s good! If you’re ever in the neighbourhood of Veghel, go there!


After causing World War III, the Coolens treated us all to a superb dinner and Wee-Steve discovered just what Schnitzel is and that Carpaccio isn’t a cold soup. We all learned a lot that day!


After dinner Louis dropped Wee-Steve off at the hotel again then, he & I spent a few more hours puzzling among Louis’ treasure trove. I got to spend some quality time on Free Me 3 & 6. (6>>3 FWIW) before Louis dropped me back at the hotel to crash before the main event on Sunday... the short drive through to Venlo-ish. 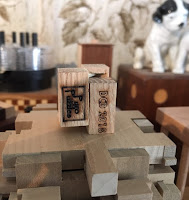 At breakfast Wee-Steve gives me a brief update on the Jabberwocky project (currently 3 years into a one-year project, things aren’t going quite as quickly as he or the other participants would prefer, but things just take a lot longer than you think they will - someone really should have warned him about that! - and he’s being kept quite busy with stuff for his wedding and his exchange puzzles - in case you’re interested).


Louis collects us and we head more or less through the centre of the city (skirting some of the evidence of the massive party the night before!) before finding the motorway to Venlo - to the home of the puzzles.


We get there a little early and find we’ve arrived at exactly the same time as Jan Willemstad, so we get to catch up a little before the hordes descend... seems he’s enjoying his semi-retirement and we manage to grab a few snaps of Wil’s pristine living room - with room to walk between things and admire the puzzles and everything... he’s been up until 2am tidying up in honour of our visit - we are indeed honoured!


The first round of coffees and tart (there is always a LOT of tart!) are almost underway when the rest of the gang begins arriving...


Frans has brought me a copy of an old Endo-San puzzle that he’s ended up with a spare -I happily exchange it for some folding puzzles. The shopping has officially begun!


Wil invites me to trawl through a few piles of books he’s discovered while he was clearing out what he has begun referring to as 'the flea market': one of the rooms crammed with puzzles which yielded a wonderful trove of puzzles he’d totally forgotten about.... one of them, Tangram Plus entertains Louis and I later that evening for a while... in fairness, it entertained Louis briefly, and “entertained” me for ages, until Louis gave me a couple of helpful nudges in the right direction - it is an EXCELLENT puzzle - a true Coffin challenge - and well worth picking up if you ever spy a copy anywhere.

The weather obliges yet again this year and we’re able to spend most of the day indoors or outdoors, depending on where the best puzzles / chat are.


Wil has left a momento from his last MPP trip (a sign asking for a good five quid contribution unless you had to fly to get there!) inside the guest loo, but ever the un-observant one, he needs to point it out to me late in the day...


Louis, “assisted” by several folks, spent a while trying to find a specific solution for a hexagonal tray-packing puzzle that Wil had found - it had pieces in four colours and we’d posited that there might be a solution that didn’t allow any blocks of the same colour to share an edge... sadly by the end of the evening, the assertion remained unproven, so I made a mental note to see if BurrTools might be able to advise on the possibility or otherwise - if only to stop my mate wasting his time searching for something that literally does not exist. 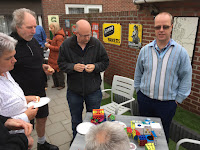 Oskar had brought along a large bag full of recent creations - all of which looked throughly bonkers (in a GOOD way!) to this non-cuber. In fairness the closest thing to a standard cube in there was a massive Gear Cube... the rest were all pretty impressive geometric shapes, several of them being hollow or skeletonised. Oskar was wonderfully generous with his time and spent ages talking to all comers about the particular nuances or challenges of a particular mechanism, of pointing out niceties designed into these beasts that casual observation might not spot... he’s clearly on another level altogether!


In addition to keeping us well watered and tarted throughout the day, Wil laid on a seemingly endless spread for lunch...some of us literally lunched for hours - something we may have regretted when we ended up at the traditional Chinese dinner after things had wound down for the day. 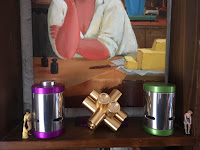 In spite of the fact that Big-Steve and Ali haven’t been able to join us for the day, there’s ample evidence of them there - from the Brass Monkey on display in the centre of Wil’s display shelving through to the box of tongue depressors helpfully balancing behind the radiator at the front door, just in case you need one urgently on the way in or out of Wil’s place - very thoughtful!


Everyone spends a good part of the day at Wil’s raking through the myriad of plastic crates filled with puzzles and novelties - in search of treasure to add to the collection. I managed to find a couple of gifts for the boys back home and a sold brass copy of a Mine disentanglement that I’d been on the lookout for. Against my better judgement I also picked up a few egg-shaped Japanese dexterity puzzles - I’m rubbishy at them, but I know a couple of puzzlers who occasionally visit who are absolute whizzes at them, so hopefully they’ll leave them solved next time they visit. (Hint. Hint.) 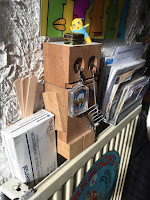 Goetz spent a while playing with a large disentanglement puzzle that had “somehow” become somewhat(!) attached to the handle of a Hales Pentagon case... each was solvable in their own right, they’d just been joined at the hip, as it were, which ended up making both rather ungainly -but still a good deal of fun!


A couple of us found ourselves examining a pair of wotsits in the flea market, one of which turned out to be a Russian pocket circular slide rule - something none of us had ever seen before, and a couple of minutes later Google popped up a set of instructions for using that specific model... quite impressive for such an unusual little item. 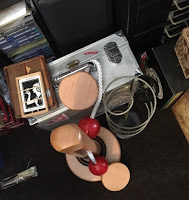 A fairly restrained day’s puzzle shopping, especially by previous standards - add to that the fact that several puzzlers around the world had saved me quite a lot of money by outbidding me on the Haubrich auction and this had turned into a less expensive weekend than it might have been... and I had an awesome time with my mates - priceless!


Somewhere around 6pm we all decamped to the local Chinese for dinner - most of us car-pooled and Rob rode there on his very English packing puzzle velocipede - probably something we said!


As per standard practice, there were plenty of puzzles around the table between the multitude of courses (all excellent as usual!) - Wil had given everyone a copy of Vladimir’s Dodecagon symmetry challenge - find 7 symmetric shapes using the three pieces - and there was a healthy challenge between the different ends of the table to produce all of them. I was not particularly helpful to my end of the table and I suspect that we came soundly second.

Rik had me totally confused during and after dinner with his arithmetic series puzzle on a beermat- I needed a lot of help to finally work that one out! I am not good at spotting patterns right in front of my snout, it seems.


After dinner a few of us went back to Wil’s for YET MORE puzzling (and a nap in Wee-Steve’s case - several actually - we kept waking him up and offering him coffee, to no avail).


Settling up my account for the day I found that I actually had some Euros left after all the excitement of leaving my wallet behind... serious restraint!


Somewhere around midnight Louis drove us all back to the hotel... another wonderful King’s Day weekend in Eindhoven and Venlo lives up to massive expectations... thanks guys! Hopefully I’ll be able to repay your generosity one of these days.


MPP in June anyone?