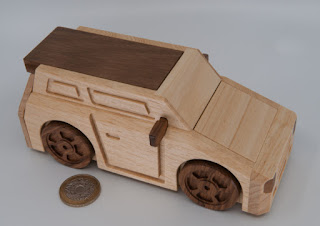 Juno makes damn good puzzle boxes… and this one’s even better than the others!

Slammed Car was announced to the puzzling public and duly appeared for sale on Juno’s website. They weren’t cheap, but then I’ve come to trust Juno’s pricing implicitly – and never once bought anything from him and found myself wondering why it was that expensive… my personal guide: if it looks expensive, then there’s a lot of Juno-magic in there that you haven’t seen from the outside… and that is certainly true here.

Made to look like a classic Australian hatchback, Slammed Car definitely looks the part! There is a lot of detailing around the body panels, windows and grills that really didn’t need to be there, but it makes it look absolutely stunning… and you have to like the headlights in a wooden accent.  And the wheels turn freely, so you can even give it to your favourite nephew to play with as a toy car!

Now you’re told up front that this is a sequential discovery box – with a loaf of bread inside it – so that it can safely be classed as a ‘box’ under the Bell-Yananose-Sadler convention.

Start exploring and you’ll find a couple of things can be made to happen and you’ll discover a couple of useful tools along the way.  It’s not too hard making the initial progress and Juno let’s you get a couple of feet firmly on the ladder before he hits you with a somewhat harder problem… 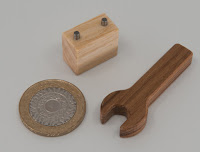 As a quick aside – it’s not just the outside that looks like a car -inside there are the sorts of tools you might expect to find in a car too.

I think of this puzzle in thirds – the first third is reasonably straight-forward – the hook. Then there’s a section in the middle that had me stumped for ages, days even! And I needed to hear my thoughts as they bounced off my puzzling guru, and have him nod sagely back at me that everything that I’ve said was correct, no I just need to find a way to use that to progress… and eventually I did – the line.

The last third is a real s(t)inker. This section took a long time – and stumped many comers at the last MPP – and it was only a concerted effort and several people trying different thing that finally enabled us to get it open and release the loaf of bread -yes,really – there is a loaf of bread inside there.

We closed it all up again and a week or two later when I came to taking the pics, I found I’d forgotten one important step in the final lock and it took me another week’s puzzling to finally get back in there again… it’s a very good puzzle… and I wouldn’t be surprised if it was entered in a puzzle design competition in the near future… and it ended up doing quite well.

When I wrote this, there were still 21 copies available for sale – I don’t think they’ll last long when people get their hands on one in a certain competition. ;-)
Posted by allard at 15:36