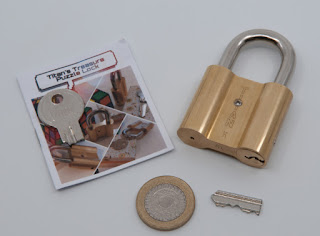 I first spotted this one on a FaceBook post a little while back and Sod’s Law dictated that by the time I headed over to the Etsy store, they were sold out… so I had to watch patiently as the first wave of puzzles made it out into the wild while I sat on my hands. I dropped Sashko a note through Etsy and asked to be put on a waiting list – and waited patiently.

There’d been a couple of questions from puzzlers as to whether this was a cheap imitation of the DanLock (after all, it’s a puzzle lock with a sawn-off key…), and initial feedback from those already in possession of both, was “No sirree! – this is a totally different animal.” – interest duly piqued, I keenly waited for my name to float toward the top of the waiting list before I pinged over my PayPal – and a short while later, a neat little packet arrived from Sweden.

Inside the packet there’s a little introductory booklet with half a key glued to the front of it…the booklet makes it clear that that half of the key is purely there for decoration – you don’t use it in solving the puzzle. Good to know.

The booklet gives you the back story about the lock which effectively collapses into: using the sawn-off half-a-key (and any other tools you can find), open the lock and find the pearl, then reset it for the next puzzlist.

OK – so hurl yourself in puzzling-mode and examine what you have… the padlock seems to be a little butchered, with a couple of obvious grub screws disturbing the otherwise unblemished surface. The key will fit in the keyhole – a bit – but not enough to be useful… and it certainly won’t turn the barrel.

Engage puzzle-brain and explore the possibilities and you’ll find a way to make a little progress and probably even find some additional tools… which turn out to be quite useful.

Puzzling-wise, I found things broke down into three phases, with discoveries / A-Ha! Moments in each phase… the first bit was fairly straight-forward and got you hooked into the puzzle. 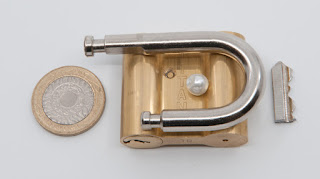 The middle bit took (me) a fair amount of experimenting and playing around before I made a critical bit of progress, and to be honest, I hadn’t realised that I’d effectively solved the puzzle… the critical little bit of treasure had become jammed in its hiding place and hadn’t come rolling out on cue when I’d opened things up.

I ended up asking The Oracle if I’d done anything stupid because I couldn’t see what else I could do and I was still searching for my treasure – he told me I’d finished and a closer inspection led me to find the treasure waiting to be revealed.


Having removed the treasure and danced the required little pirate jig, I began the reassembly process – and that, it turns out, is a whole extra puzzle to solve… a puzzle that, on its own, would be worth the entry price, IMHO.

… it’s NOTHING like any other puzzle lock out there – and it’s a damn fine puzzle.
Posted by allard at 07:27