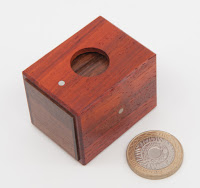 Eric recently announced a new series of small puzzle boxes – aimed squarely at lovers of the box, made to his wonderfully exacting standards, but on a smaller scale, resulting in a more pocket-friendly price point… there was quite a lot of virtual cheering when fans read of his plans, and then a couple of weeks ago he released his first two small puzzle boxes on the world. 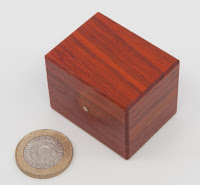 One side has a large porthole cut into it giving a view of what seems to be the bottom of a drawer that protrudes a little outside the one end of the box. There’s a little play on the drawer, mirrored in that piece you can feel through the porthole. There appear to be a few magnets inlaid into the sides of the box and that’s about it – nothing else to see here, guv.

Fiddling around with it, there are definitely some rattily bits inside the box – there always are, right? 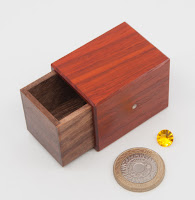 Turns out there’s a little more to discover and to play around with, and when you find just the right combination of “things”, you’ll find the drawer compliantly opening up and displaying the elegantly simple locking mechanism – and if you’re like me, you’ll ask yourself why you made such a meal of that one!

It’s unusual and Eric’s once again done a nice job of making it less trivial than it might have been – nice bloke that Fuller!

Small Box no. 2 is Eric’s homage to Alan Boardman’s A-Ha Box – an instantly recognisable (when you solve it!) classic design. There’s a huge amount of elegance in the simplicity of the puzzle’s design – nothing is wasted… and it’s almost too easy to convince yourself that it’s impossible to open – until you find exactly the right thing to do to it – and then it puts a fat grin on the puzzlist’s dial. 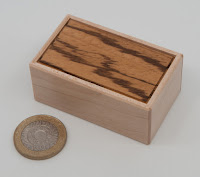 Eric’s done a stunning job of recreating an old classic, but as usual, he’s gone a little further and Fuller’d it with a neat extra little touch that I suspect most people will not even notice… he didn’t have to do it, he’s just gone and made extra work for himself – but this puzzlist grinned even wider when he noticed it – thanks for doing that extra little bit in there, mate! …that makes it a Fuller and sets it apart!


Judging by the first two, Eric’s onto another winning set of puzzle boxes… and they’re still available for sale because he made a decent sized batch of the little chaps!