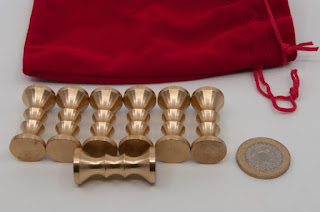 I got a prototype copy of their remake of Oskar’s Hyperboloid Burr  for my birthday.

The original wooden Hyperboloid Burr had been Naoki Takashima’s Exchange puzzle a couple of years ago. It was presented as an interesting burr assembly with six identical pieces, each shaped with hyperboloid curves – part of the presentation was that a further unanticipated assembly had been discovered allowing an additional identical piece to be added – at which point Takashima-san produced an extra piece from his pocket and handed it over for the additional challenge… it made not only a nice (true!) story, but made the puzzle even more intriguing.

It often got foisted on visiting puzzlers and judging from the number of times I’ve come across it at others’, I’m clearly not the only one who enjoyed it.

The Two Brass Monkeys took on the challenge of making them up in nice, solid, brass – and pretty soon they realised that the original material was a heck of a lot more forgiving than their chosen form… and the resulting hunt for the perfect tolerances turned into a real world binary sort as they tuned the tolerances between “too loose – falls apart” and “too tight – can’t assemble”! 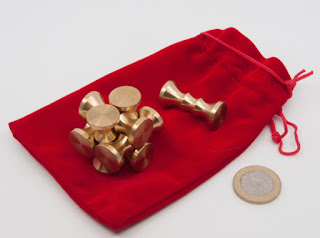 What they’ve ended up with is an excellent compromise to within 0.03mm of either falling apart or not being assemblable (Yes, it IS a word, damn spellchecker!). Both assemblies work neatly – with the six-piece, assembly is on the looser side – you can’t pick it up by a single piece- but the seven-piece assembly locks together with a satisfying little clink.

A couple of weeks ago the boys presented me with a copy of their newest endeavour – something I’d been allowed to coo over at a previous get together. They’d taken a design by Scott Elliott called “It’s Nuts!” (exchanged by Jerry Slocum a couple of years ago) and produced it in brass… that doesn’t sound very impressive, unless you know “It’s Nuts!” or you’ve seen one in the flesh… the premise is simple: you have a large threaded bolt with two nuts on it. Turn the bolt and the two nuts head off in opposite directions! 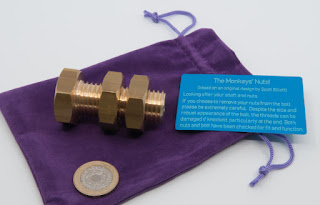 The back-story on the original design, as I’ve heard and remember it (feel free to correct me in the comments) was that Scott originally stumbled across a video of this being presented in a language he hadn’t understood – a magician was demonstrating that the nuts on this bolt behaved rather oddly and Scott was hooked. He spent a while working out how to get it to work and then duly printed some on his trusty 3D printer… Jerry was totally bowled over by them and insisted on using them as his exchange puzzle that year so Scott 3D printed hundreds of them. Since then it turns out that the original video he’d seen had all sorts of trickery and couldn’t be demonstrated in the clean, open manner that Scott’s version works – in short, he’d seen a magic trick and then made it work in real life – he’s a bright lad is our Scott! 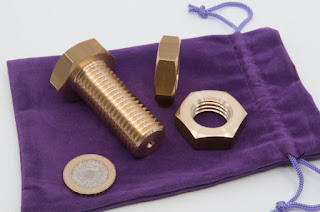 “It’s Nuts!” becomes a bit of a standard and from time to time Scott would offer them in different 3D printed formats, including a small number of quite impressive (albeit rather dear) 3D printed metal copies. Being 3D printed, some of the subtler points weren’t quite as subtle as he might have liked… enter the Two Brass Monkeys who duly challenge their tame engineer to do better – and boy does he!

“The Monkey’s Nuts!” is a big old solid brass bolt with a pair of nuts threaded onto it… spin the nuts and they head in opposite directions… and it is beautifully made – the clever stuff is wonderfully subtle, to the extent that you’d need a very close inspection to spot the trick – most people won’t!

This one probably stretches the boundaries of what a puzzle is – it’s more an impossible object – or a downright confusing one at least – it begs to be fiddled with and challenges everyone’s assumptions about a simple everyday object.

<And make sure you read the little card that comes with it - there's some important info on there, there is also some excellent humour and wordplay!>