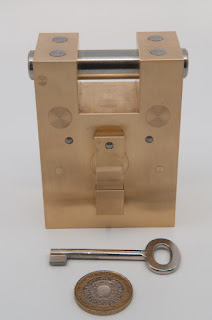 I bring you a somewhat overdue blog post about a stunning puzzle that I got at just about the same time as the country went into lock-down… that will become important later on in the story… in the meantime, you just need to bear in mind that was seven months ago!

When I got the eagerly awaited email from Rainer announcing that he was ready to start selling his new Popplock T12 I didn’t waste any time and a few days later a rather heavy package arrived in Barnt Green.

The T12 is a brute of a lock – this thing will do serious damage if you’re ever clumsy enough to drop one. It deserves respect, and it definitely got more than its fair share of that from me… over the course of the following six and a half months or so!

In its starting state, you have a key with nowhere to shove it, a large block of brass, which might just as well be solid for the lack of anything doing on it at the start, and a really solid looking straight steel shackle. (Mental note: can you call a straight metal bar a shackle if it performs that role? … Hales?)

There are a couple of obvious things to try at first and they generally result in finding something actually rather useful: a keyhole! (Bet you didn’t see that one coming! Even thought you were given an actual key with said lock, remember…?!)  Putting the key in and turning it, sadly, does not open the lock…

Examining things a little more carefully provides some clues as to some things that might be interesting at some point  (that’s a whole lot of somes and I’m not good at numbers!), albeit right now they’re stubbornly useless… 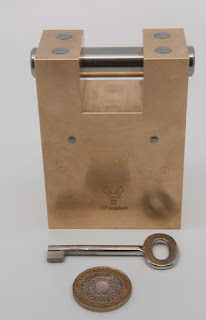 Several days later my troubles began: I thought I’d found something interesting and potentially useful, and indeed it may well have been, were it not for the fact that I found I couldn’t retrace my steps and I’d somehow managed to trap the key inside the lock… cue mild panic… and a seriously concerted effort to release said key.

A few weeks later I reach out to my tame locksmith to ask if he’s ever seen that before on this puzzle – “Eh, nope! – You’ve obviously done something stupid, ya muppet!” – Not a direct quote, actually he was far more sympathetic and suggested I send it back to Rainer, but neither of us was convinced that a T12 would actually allow me to do anything irreversible – and I decided it was far more likely “operator error” so I kept at it...

It sat on my desk for the next few months – getting picked up from time to time whenever I had some downtime in “the office” but sadly the key remained very much trapped.

By now we’re well into lock-down so I can’t even rely on the usual services of my puzzle-whisperer to rescue me from my stupidity – he’s trapped in The Netherlands.

It became a bit of a standing joke with some of my puzzling mates on our regular Sunday evening video calls – I’d show them the T12 with key trapped, they’d laugh at me and ask me if I’d tried blowing on it yet. (Yes. It didn’t help. Damnit!)

After several more weeks of their enjoying my misery, they finally took pity on me and coached me through some things I swore I’d already tried, exactly that way, about a million times already, but somehow the key was no longer trapped! 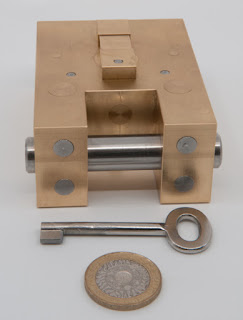 Promptly reinvigorated I managed to make some serious progress over the next week and a bit – using some of what I’d managed to learn while the key was trapped in there to finally release the shackle, a mere seven months after getting this thing…

What do I think of it? Given that for the vast majority of that time it was apparently locked up refusing to give up its key? It’s BRILLIANT! This thing has locks on the locks – getting all the way through the solution gives you a terrific sense of achievement – you earn the victory on this one… for a puzzle with so little apparently going on on the outside, this one packs a big punch! Would I have enjoyed it more if I hadn’t had to wrestle with it for months to give up its key? Hard to tell… either way, there’s no denying it’s a fabulous new puzzle lock from the master.