The Joy of Hex 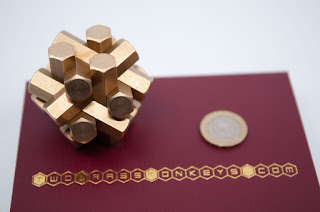 The Two Brass Monkeys are at it again: this time they’re jam-packed with a whole lot of hex and a decent filling of double entendre – vintage monkey business!

Steve and Ali have leant on Derek for some hexhaustive analysis (well, he was hexhausted!) of the possible assemblies of hexagonal sticks in the shape of Stewart Coffin’s classic Hectix design. They’ve used that to select three base designs, and a set of five further pieces that can then be used to construct 30 hand-picked and carefully named assemblies that are neatly documented in the accompanying book: The Joy of Hex… Oh, and they also throw in a hex aid, for, err, you know… assistance.

The result is a handsome set of four matching tray-shaped boxes with custom foam cut-outs to cushion your pieces of hex when you aren’t playing with the little buggers. These are some good-looking puzzles and the packaging is none-too-shabby either!

While you may be tempted into jumping straight into the joys of Group Hex, I would strongly counsel you to start with the Missionary – this one builds confidence and if you’ve never hexed before, it’ll give you a solid basis for further hexploration. I’d also encourage you to use the hex aid you’ve been given – unless you have way more hands or fingers than the average, you’re going to be thankful of the assistance. 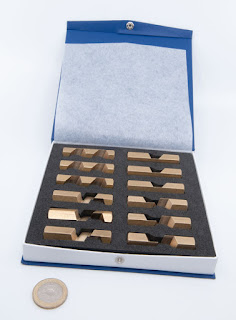 The Missionary consists of three sets of four different types of pieces – have a look at the target shape and you can probably guess how you might like to try and use those sets of pieces… and with a little thought, you can figure out how they might go together – in fact if you use a simple rule, you can get virtually all the way to the end inserting a piece at a time… it might not be the most adventurous position, but it is the bedrock of all things hex.

While common wisdom might suggest tackling Bish Bash Bosch next – after all it is listed as position number 2 in the great Hex Manual, I would seriously counsel you, dear reader to progress straight to Group Hex. Trust me, once you’ve got the Missionary under your belt, so to speak, you’re ready for Group Hex.

Group Hex is designed to confuse – where Missionary gave you sets of three to position and get comfortable with, this one doesn’t – there is but a single set of three identical pieces and then there is a rather unruly collection of pieces – 8 different sorts in fact! (I’m left wondering where they got the name for this position from!) In fact, this position uses the maximum number of piece-types possible and results in a unique solution – it’s all about matching up all your rods and notches properly, making sure than no notch is left un-rodded and you’re done! 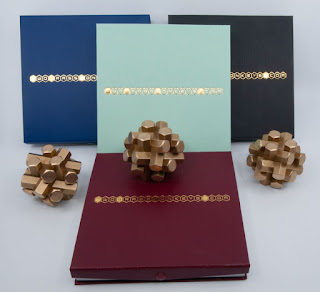 Bish Bash Bosch, or Position 2, on the other hand, is not nearly as accommodating. It is pure evil and should not even be approached unless you are absolutely determined to be thoroughly humiliated along the way – but perhaps if humiliation is your thing, you’ll like this one!

A good few months ago, before lock-down began, the Monkeys began their hexual hexperimenting and inflicted some of it on the good people of the Midlands Puzzle Party… several of the assemblies were tested and pronounced achievable and this made Steve pause for a while and pull out something that would stop us in our tracks – showing us the position assembling on his trusty laptop we determined that there was an awful lot happening all at the same time, so a team of puzzlers duly assembled and in the end it took about 5 people to assemble the darn thing… and that is the position now dubbed Bish Bash Bosch, ladies and gentlemen.

And you’re cordially invited to try and assemble it yourself – with or without a hex aid of some description, heck, any description!  It does not go together in a nice simple linear fashion, things happen sort of all at once – and choreographing all of that takes more than the average number of hands and or fingers on a single person… it took 5 puzzlers! Bish Bash Bosch my RRR’s!! 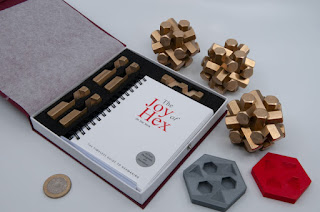 (FWIW I had help getting mine into position, hex aids, a rubber band and my loving wife were all required to coax that little beast together – where I hexpect it to stay until the arrival of the four horsemen of the apocalypse.)

As I write this, that’s about as far as I’ve got – there are another 27 positions for me to hexplore using combinations of those and the hextra five pieces that come with the set… I hexpect that I have several years of hexual discovery ahead of me given how long it took me to get those first three positions assembled…

If you’re already a fan of the hex, this will really improve your repertoire – and if you aren’t, you probably owe it to yourself to hexperiment a little… oh, and the humour in The Joy of Hex is hexcellent!

[No puns or double entendres were armed in the making of this blog.]