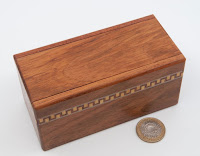 Towards the end of last year my fellow Fellow Asher got in touch with me and asked if I’d be interested in a copy of something he’d been developing with Robert Yarger – a quick check on whether Hades had actually frozen over yet confirmed that, abso-flipping-lutely I was interested… and then a couple of weeks later a well-protected package duly arrived in Barnt Green.

Now unfortunately in the Walker-household there is an established tradition that packages addressed to me arriving in the couple of weeks before Christmas are hijacked by management and placed under the Christmas tree – where they will wait until Christmas to be opened… and Asher’s parcel arrived solidly in the middle of said hijack-period - and so it was left under the tree for several weeks… until Christmas.

I was finally allowed to open it on Christmas morning and it’s gorgeous… a handsome box about the size of a box for storing a set of standard chess pieces in – with some lovely inlay work around the side – and an obvious sliding lid… which didn’t want to slide and I wasn’t going to force it!

I fiddled a little with it on and off over the course of the next few days, deliberately not really diving into it as I wanted to save the best for last… so I ended up working my way through the Karakuri Christmas gifts I’d received, some things from Radek, something new from Endo-san, a couple of Osanori’s and a pile of things from Wil – before eventually allowing myself to get to grips with the One Hand Puzzlebox… only I couldn’t get it to do anything – the lid would slide a tiny bit and then jam, I tried all sorts of tapping and gravity inversions before admitting to Asher that I hadn’t even been able to open the lid yet – at which point he told me that I was clearly being far too careful and I should just open the lid – and indeed a little more pressure had the lid sliding open and revealing the pieces inside – with one of them bobbing up and standing head-and-shoulders above the rest of the pieces – obviously the culprit that had me thinking the box had a lock on it. 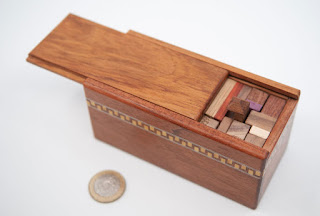 At this point the lid will slide about halfway open and then it will stop dead – but there’s a (half) box-full of little pieces – at least one of which is begging to be pulled out… and if you do give it a tug, it will drag all of the other pieces out of the box with it… so far things seem calm and controlled…

However, as the pieces clear the edge of the box they start misbehaving rather badly – in fact, it turns out there are a large number of magnets on the pieces, most of them apparently opposing when they’re in the box, so when you tug them out, they spontaneously rearrange themselves into a shape that most definitely doesn’t fit back into the box again…

The game is afoot…

OK – so we can take the pieces apart and work out how many pieces there actually are in there – more than you might initially think, and then we need to set about working out what the goal is and how the heck we’re going to get there.

The goal is to insert the pieces, one at a time, into the box in such a way that the second compartment (remember that the lid slid halfway open and won’t slide any further) is properly unlocked.

Now the real fun starts – identifying all of the pieces and working out what their eventual positions need to be to get them back into that first compartment… then trying to work out how to put the pieces in in a manner that doesn’t involve the dexterity of a sleight of hand artist – bonus hint: if you find yourself trying to pin one piece in place with a finger while inserting another piece with the remainder of your fingers, you haven’t found the most elegant solution yet!

Playing around with those pieces is good fun – sometimes they have a mind of their own and won’t stay where you want them, but when you find just the right set of pieces, in the right order, there’s a delightful clackety-clack as you manoeuvre them into place – Asher reckons it’s quite Zen putting the pieces into place and I have to agree… certainly when you compare it to the relative chaos of the extraction process! 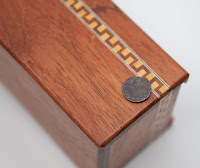 There’s a wonderful further bit of puzzling that provides another great “A-Ha!” moment, or three… and then indeed, you can insert each piece and see the second compartment neatly unlock as expected… revealing a little ancient Greek coin inside the second compartment – a nod to the fact that an earlier working title for the project had been Pandora’s Box.

Thanks Asher for this incredibly generous, and delightfully puzzling, gift!