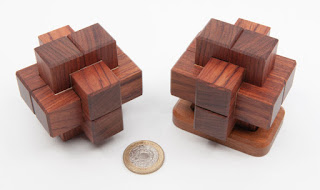 Somewhere around the tail-end of December Juno released a few new puzzles on Pluredro and I wasn’t quite quick enough to pick up a copy of each, but I did manage to get a pair of the Crooked 6 Piece Burrs… which I thought was great.

and while they may look alike, there is really no comparison between them at all.

The one is a polite, genteel puzzle that rewards some analysis and behaves like an absolute gentleman throughout the entire solving process. The other is a wolf in sheep’s clothing out to mug you and take your last shred of dignity – you’ve been warned. 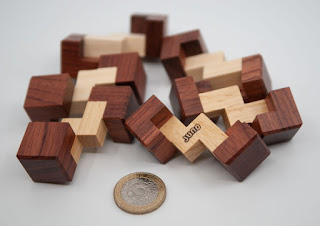 The original one is the gentleman here. Taking it apart is a nice, predictable affair, and scrambling the pieces provides a gentle, relaxing solve. The piece shapes may be more than a little confusing – it certainly took me a while to get my head around how things were inter-related, but once you’ve mentally switched gears and got yourself thinking around corners, you’ll be fine!

The pinned version is a different kettle of fish altogether. 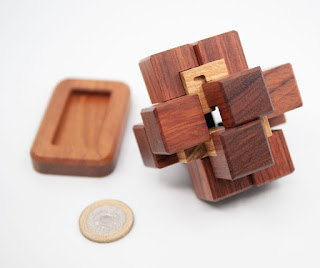 Start playing around with the pinned version and it’s immediately clear that it ain’t going to come apart nearly as easily as the original version… those little pins in the name are there to claw on for dear life as you try and take the little guy apart – and while it isn’t tremendously tough to work out how to take it apart, it will absolutely kick you in the teeth in the process.

No matter how carefully you proceed, this little illegitimate child (see, PG friendly references!) is going to fly apart in a million pieces when you really don’t want it to. I was warned, and I proceeded carefully, and I still made use of some rather colourful language when it all let go rather spectacularly and gave me a messed-up pile of pieces. 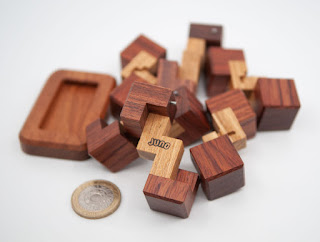 And that’s the easy part…

... the really hard part is putting the thing back together again… this time you’ll literally be finding those pins fighting you all of the way, trying to keep the jolly pieces apart – it is uncanny!

Playing with the original version is like a gentle game of chess with an old friend.

Playing with the pinned version is like the wildest rollercoaster ride you’ve ever taken – heaps of adrenaline along the way and you’re really glad when it’s all over!