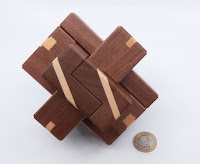 I recently managed to pick up a copy of Juno’s L Burr. For some stupid reason I’d missed out on getting Brian’s Limited Edition puzzles in 2012 and I’ve been keeping an eye out for them recently… two down, three to go, I think.

Juno began playing around with board burr designs around 1990 and soon enough he began to explore variations on the theme, where the boards were perhaps a little morphed. L Burr resulted from that rather fruitful search. Each “board” has an L-shaped profile when viewed from the ends and that enforces some interesting restrictions when things begin to go together. Now remember that back in 1990 we didn’t have the wonder that is BurrTools handily installed on each PC in the house, so Juno designed this one in his head… over the course of a week, and it’s really unusual. 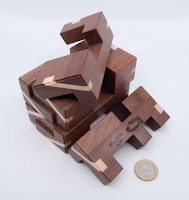 Usually once you’ve extracted the first piece from a six-piece burr, things get a whole lot simpler – after all, you’ve removed a source of several of the limitations, so the bits that are left must be easier to manipulate… right?

L Burr lets you proceed in a fairly traditional manner to remove the first piece after four moves… and indeed from there there are a number of routes open to the intrepid puzzler, but apparently none of them are any use whatsoever… time to Think(c).

Of course, there is a way forward, but it’s fair to describe it as pretty non-traditional and if you aren’t exactly a burrista (and I sure as heck aint!) this will invariably put the fear of all things holey into you.

Reassembly is best described as an “interesting” challenge… one I’m rather proud of being able to achieve – it took a bit of out-of-the-box thinking and was rather satisfying.

If you like board burrs, this is definitely one worth playing with – it will mess with quite a lot of your preconceptions of how these puzzles should work… definitely a puzzler’s puzzle!