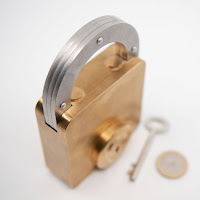 Some things in life are very reliable – take Shane’s opinions on puzzle locks for example: if he rates one highly, then chances are good that any mere mortal is going to find that very thing absolutely astounding, so when he put a picture of a new T13 on Facebook and began singing its praises, I knew we were in for something really special…

First impressions of the T13 are, indeed, impressive – this object has presence – it demands attention – it also demands a sturdy surface to play on given that it’s a huge two kilogram lump of steel and brass.

The shackle appears to be made of three thick sheets of hardened steel riveted together – reinforcing its pedigree as a proper, if somewhat oversized, lock. The keyhole is offset at a jaunty angle begging to be played with. The back has a springy disk with Rainer’s customary logo and the lock’s name engraved on it… and the only other slightly unusual feature are two disks on the top of the lock inside the shackle… the rest looks pretty, er, lock-like.

I started by doing the obvious and immediately I knew by the gentle click and my inability to reverse my actions that Rainer was already laughing at me… I’m sure it’s only me, but I got suckered in and knew I’d done something a little silly right from the very beginning. (In my defence, I think you have to…)

I won’t bore you with all of the details, but I will tell you that the solve took me weeks. I spent a long time thinking that there was absolutely nothing else I could try, explore or experiment with, only to make the tiniest little discovery a few days later and then find myself trapped for a few more days. 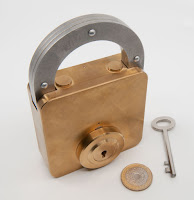 The solution path on this one is well and truly long and winding, but along the way you will be rewarded with several fantastic “A-Ha!” moments when this little lump of metal does something utterly wondrous – if your jaw doesn’t hit the deck at least three times when something strange happens, then you aren’t human!

This puzzle keeps on surprising you right up until the very end… and even the final element is good enough to hold up a seasoned puzzler for the best part of a week or more (not me, a friend – I’m not that seasoned!).

Another phenomenally good puzzle lock from the master-craftsman – a worthy successor to all of his foregoing Tricklocks – another Jaw-dropping mechanical masterpiece… Oh, and Shane was absolutely right!