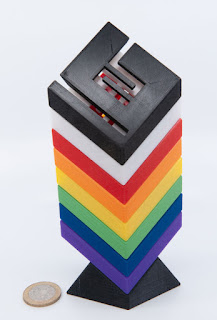 I thought Ziggurat looked interesting when I first spotted it in the 2021 Design Competition, so when Eitan announced on Facebook that he would be making copies available for sale, I asked for my name to be added to the list of keen puzzlers wanting to acquire a copy.

Eitan had three versions available [over here] – a two-coloured version, a multi-coloured version (you pick the colours) and a rainbow-coloured version – I rather liked the standard rainbow pattern so opted for that one and a couple of weeks later the vagaries of the post(?)-COVID international postal system delivered a carefully packaged puzzle to my doorstep.

Ziggurat was designed by Eitan Cher and Bram Cohen and a quick squizz at the pieces will have you convinced that this is an n-ary puzzle… and you’d be right – but this n-ary puzzle is special: almost every other n-ary puzzle know to man relies on some form of cage or frame for the pieces to interact around… Ziggurat dispenses with the frame!

All of the interaction-enforcement is handled by the rather cleverly designed pieces themselves… and the really mind-blowing bit is that it’s all done with a single pair of handed piece designs – the engineering is very clever!

Eitan ships the puzzles with a stack of 6 pieces already threaded and mounted on a stand so that it displays rather neatly… and there are another two pieces shipped separately… so you have to play with the puzzle to add those last two pieces… and that’s going to involve learning how the pieces interact and how you introduce new pieces to the stack.

I won’t tell you how long it took me to work out how to remove the stack from the stand, because that would just be embarrassing…<quite a while!>

When I did get the stack free it was pretty clear where you needed to start, and having made a few moves you can start to see how the pieces interact – I find it helps if you keep a mental image of the direction of the outermost piece you’re currently moving, that way if you find yourself unexpected coming back the other way, you can recognise it early on and not just end up right back at the beginning. (Yup, got that t-shirt!) 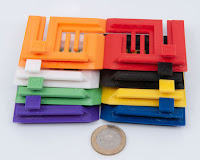 Of course you really do need to add those two additional pieces and close it all back up again… and even when you’ve done that, you’re still not really done… you see those pieces can also be assembled the other way around – so instead of starting with, say, a left-handed piece, you could start with a right-handed piece… and in theory all the moves are simply mirrored… unless of course your brain is now hard-wired in a particular handed-ness – and in that case you’re going to find it a little trickier…(Yup, got that t-shirt, too!)

It really is a clever design that strips the idea right back to the barest of bones and leaves just be the best bits to be played with.