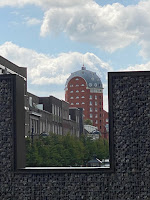 After a two-year hiatus, Wil sent out an invitation to his King’s Day Puzzle Party and it didn’t take long to decide to sign up for it – it’s been ages since I’ve seen most of my puzzling mates and it felt like the pandemic was beginning to let up, so the decision was made. Plans were made on a couple of our regular Sunday evening calls and soon enough it was the appointed Saturday morning and my alarm was waking me at some unearthly hour so I could spend an hour queueing until I could use my Fast Pass through the airport security queue… from there it was all a walk in the park!

The short flight across the channel to Schiphol was uneventful, if a little strange with everyone wearing the obligatory face masks.  And customs and immigration was absolutely painless… Brexit hadn’t brought massive immigration queues this time at least! After sorting a few connectivity issues and some help from my local travel fixer, I found the right train and headed toward Eindhoven, avoiding some holiday rail works.

Louis met me at the station and whisked me off to his place for some lunch and a couple of hours puzzling until the Two Brass Monkeys’ train arrived. We met them at the station and headed to the hotel to check in and dump our bags before some more puzzling at Louis’.

I had a great time working my way through Coremods’ Ice Box – I really liked the number of totally different mechanisms that have been incorporated into a neat little puzzle – and if you don’t smile when you’re “presented” with your treasure, then there’s something wrong with you! (I liked it so much I bought myself a copy a week or so later when a new batch went up on the Coremods Etsy shop.) 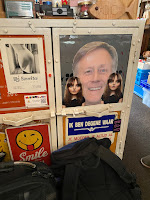 I had a lot less success with Pair-o-Dice – I spent ages on it and got precisely nowhere – even after Louis pointed out that one of the bits had broken and it actually just fell out if you held it in the right orientation… he ended up giving me another nudge and that just left me stuck in a different place… in the end he put it in a bag and told me to take it home and solve it (and a few weeks later it’s still testing me, albeit I’ve made a fair amount of progress in the interim at least – and how the heck I’m going to get that thing back together, I have no idea!)

Late afternoon we headed out for a time-travelling escape room in a nearby town – we started off in a large room with rock paintings and some puzzles to solve and having done that unlocked a time machine that we all crammed into. Once we’d solved the obligatory puzzle we leapt forward in time and headed through into another room. This one slowed us down a bit until we worked out what we were supposed to be doing and then it was back into the time machine… except the doorway between the second set of rooms and the time machine is quite small, and some of our team are somewhat larger than life so there were some groans from one of our number when we realised we were heading back to the time machine… little did he know we’d be visiting that room more later.

This time when we were released back into the first room, it had changed totally – apparently all of the walls had been replaced while we’d been time travelling… a process that got repeated again and again as we skipped through time – quite a fun mechanic – all implemented manually by the proprietor while we were trying to solve the next set of puzzles. 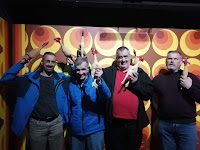 One of the funniest puzzles involved catching rubber chickens as they were released from the ceiling – with everyone needing to catch their chickens before they hit the floor. That part took a bit longer than it could have as one of our number kept missing his chickens… until about the third round when he was so delighted that he'd finally caught his first one that he promptly totally ignored his next one due to the ongoing celebration of his first catch… it did make us wonder if rubber chickens were the next tongue depressor/hamster/meme thingy.

We managed to get out of the escape rom with a few minutes to spare and then enjoyed sitting at the bar watching the footage of the bunch of us bumbling around in the room mostly looking pretty clueless and squealing when the hooded monk put in an appearance… really unusual escape room with bonus points for the multiple re-use of all of the rooms. 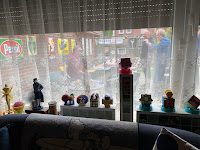 After ordering some pizzas we headed back to the Coolens’ for dinner and, you guessed it, some more puzzling. Somewhere around 11pm I started fading badly and Louis dropped us off at the hotel for some rest before the main event on Sunday.

I met the Monkeys for breakfast and then Louis collected us and drove us through to Venlo where Wil gave us a massively warm welcome. Familiar faces began arriving and soon there was a great buzz around the place as people who hadn’t seen each other in ages caught up and told one another what had been puzzling them recently. 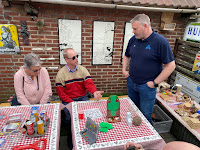 Oskar set out a table-full of newly printed designs and delighted all comers with stories about each of them – how they were designed, what was particularly interesting about them. He had a small copy of Jacobs’ Ladder with an unglued key piece that allows it to be assembled and demonstrated without the move-count getting way too high to return to its starting position and he tells us how AJ Jacobs copy of Jacobs’ Ladder got its final dimensions: it’s the largest standard shipping dimensions for ordinary packages – and that’s what determined the level of the generational puzzle designed for The Puzzler. That’s interesting?

Oskar and the Monkeys spent a little while checking out the nice brass prototype the lads had made up from one of Oskar’s designs and the conversations looked fairly positive so hopefully there’ll be another puzzling lump of brass appearing at some point in the future.

The Monkeys had also brought along some stock of their current wares, as well as a number of copies of Six Hookers – making their world debut at Wil’s King’s Day Party. 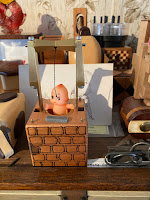 It was super to see Rik and Maria, Chris and Michel and to meet a couple of new puzzlers. Lovely to be able to catch up with Jan Willem again – emailing isn’t quite as good as a chat in person.

As usual Wil totally outdid himself on the catering front – with a massive selection of fruit tarts on offer pretty much the whole day, and a huge spread of scrumptious goodies for lunch as well… it just kept on coming.

I did my usual of alternating between sitting and fiddling with an interesting puzzle while chatting to someone, and raking through Wil’s hundreds of crates of puzzles – in search of new treasure. I managed to pick out a couple of Karakuri boxes that I rather fancied and put them on one side.

One of the puzzles I randomly picked up and failed to solve was a simple-looking disentanglement puzzle from Jan Sturm – after quite a while of unsuccessfully solving it I raked through the Sturm crates to pick out a copy, unsure if I already have a copy (in which case I’ve probably solved it at some point – and in that case I now have two copies of an excellent puzzle – ah well…). 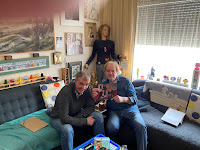 Later in the afternoon, as folks began heading home and the numbers subsided it was lovely to spend some time chatting with Wil and just catching up – he’d had a picture book made of some of his Facebook posts and presented me with a customised copy that even Gill will like – the picture on the back of it came from my first visit to Wil back in 2011 – so we recreated the shot in the same spot in Wil’s lounge, this time with the book cover… and Steve kindly took eight or ten shots of the scene, and a couple of videos – most of which had his finger in front of the lens… thanks mate! :-)

In the early evening, the remaining souls decamped into the village for dinner at a wonderful new restaurant on the river as our usual Chinese restaurant wasn’t open as they’ve been having difficulty finding a suitable chef due to the pandemic. Wil  treated us all to a fantastic dinner and then we loitered down at the river for a while enjoying ice creams.

Back at Wil’s there was time for some more chat and fiddling with puzzles and when Wil fortuitously stumbled across a copy of Roger’s Mastercard variant he remembered that he’d put aside for me and duly presented me with it.

Before I left he also gave me a copy of a prototype of a new box from JCC which I’d been fiddling with unsuccessfully at both Louis’ place and at Wil’s… and I’ve now been fiddling unsuccessfully with it at my place as well… there’s a wonderful symmetry in not being able to solve puzzles anywhere. 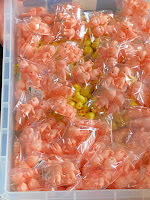 …which duly came around a lot quicker than I’d hoped – I met  Steve and Ali for breakfast and decided to join them on the train out of Eindhoven in the hope of getting to Schiphol in plenty of time for my flight that afternoon. We had about an hour together on the train before we headed off in different directions – nice to be able to chat about a great weekend we’d been able to spend together, catch up with friends, oh, and play with puzzles.

I’m glad I decided to get to Schiphol early as I ended up spending two and a half hours queuing to get into security – it seems that airlines may be flying, but airports aren’t quite ready for the people yet…

In spite of all the queueing it was a thoroughly wonderful weekend – Wil put on a fantastic puzzle party, and it was lovely to be able to catch up with him after so long. Louis, as always, was an absolute rock-star, keeping the visitors royally entertained and carting us around all over the show. Thanks guys – that was awesome!