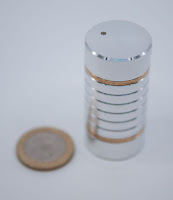 I’ve written about a few of Phil Wigfield’s puzzles in the past and alluded to a couple of other that I hadn’t done a full blog post on – one of those was a lovely little puzzle called spinning tumblers.

Spinning Tumblers is a little barrel-shaped object apparently made up of a number of stacked brass disks that are resolutely fastened together. Sometimes the disks will spin freely and sometimes they will be locked… it’s weird… and makes for a fun puzzle. 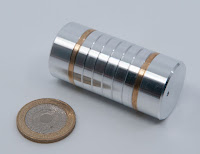 Eric Fuller got hold of a copy of Spinning Tumblers and decided it should be “improved”, and by improved, of course he means made a whole lot harder! He’s added a few little twists to the design that will have you doubting your sanity – you know what you want to happen and sometimes that very thing will indeed happen, and sometimes it won’t – no matter how many times you try and make it work.

He's also made the start of the puzzle a lot harder… on Spinning Tumblers you can always work out where you are in the maze, so to speak, whereas Eric’s isn’t quite that considerate – at times it appears as if you are in fact nowhere at all… which can be a little disconcerting! 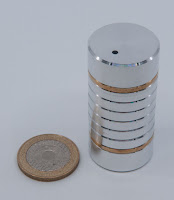 So Eric’s managed to make not only the beginning, the middle, and the resetting more difficult – he’s also given it a new colour-scheme by precision machining most of it in aluminium, with a couple of brass accents as a nod to its forebear. (He’s also given it a handy backdoor for resetting quickly or indeed reconfiguring the maze, just in case you want something a little sneakier.)

Psycho Disks definitely ramps up the puzzling challenge over Spinning Tumblers – about as much as the difference in names suggests – this is not a trivial puzzle – probably best inflicted on other puzzlers, especially those you don’t really like. ;-)