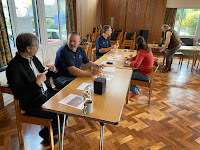 I’ve just about lost track of my butchered roman numerals, but I reckon this was somewhere around the 44th in-person MPP – it seems they’ll never learn so we’ll need to carry on having these things…

This one started on the Friday for me – I’d taken the day off work to get some organising for the weekend done and get some puzzling in myself – generally the weekends can involve a fair amount of running around and getting stuff organised, so some personal puzzling time is a bonus. 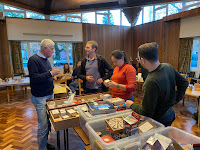 Stefan arrived late afternoon and Louis arrived early evening and once we had both of them back at the house, we polished off a couple of pizzas before heading for the puzzles. Stefan gifted me a (superbly) 3D-printed copy of Rick’s Keyhole Cube with a beautifully designed stand which I got rather a kick out of assembling – I’ve probably solved it once or twice in the past, but it’s still nice to come up with a strategy and get it assembled.

Louis made short work of a tray-packing puzzle that Stefan had brought along – and in spite of that, I failed spectacularly to get anywhere near a solution. I called time somewhere around midnight and left the lads still puzzling… 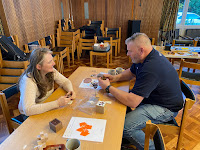 Next morning we had a bit of breakfast before packing up some puzzles and heading down to the village hall to get things set up… Louis and Stefan did pretty much all of the heavy labour while I sorted out the drinks and treats and by the time I’d made my normal trip to the shops to pick up the milk and some sodas, the rest of the gang had already begun arriving.

Louis had brought along a selection of the Nob Yoshigahara Puzzle Design Competition entries and laid them all out along the back wall for anyone to have a bash at… a brilliant initiative that saw not just the IPP members who’d be voting in the Design Competition being able to fiddle and play with at least a selection of the entries, but also meant a heap of non-IPP-ers got to experience some of the designs as well – Nice one, Louis! 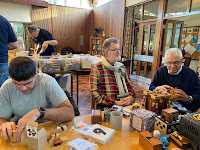 It didn’t take long for a decent gang to appear and the puzzling and banter kicked into full swing. I collected Ed from the station and got him set up with some puzzles and puzzlers to amuse him – I’m still not sure whether the former or the latter were the main source of amusement. John managed to wend his way from Boston, via London with a little Uber assistance on the last leg and duly joined the fray – settling into things as though he been to every other MPP in spite of this being his very first one. 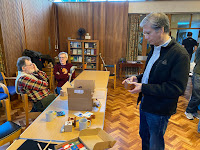 Steve had brought along a bunch of wooden copies of Mrs Butler that Vinco had made up for him and he duly showered them on all and sundry – and I’m happy to report that it is just as fun in wood as it is in 3D printed form. Ed seemed to really enjoy playing with Mrs Butler(!) and particularly enjoyed the final part of the tricky assembly process. (Great job, Ed!) 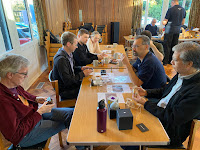 Sometime around midday we headed off for the de rigueur pig rolls and kebabs, with only one or two folks opting for the healthier alternative of a packed lunch from home. Simon arrived while a bunch of us were having lunch and a couple of helpers duly unloaded several crates-worth of puzzles that Simon had brought along for sale – he was doing his usual generous charity donation to Oxfam for any puzzles that anyone wanted to take off his hands – a great initiative that saw several folks acquiring some pretty unusual, often rare puzzles, all for a great cause!

I headed back to the station to collect Peter fresh off a train from London and managed to swing by the house to collect a puzzle that Brian had left at my place for Simon a couple of month’s ago. Back down at the Hall there was a reasonably orderly throng around Simon’s crates as folks trawled through the crates piled with commercial puzzles, new and old, and too many IPP exchange puzzles to count. I managed to pick out a few interesting disentanglements, including a pair of nice Rick Irbys - definitely worth raking through! 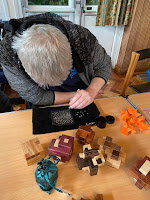 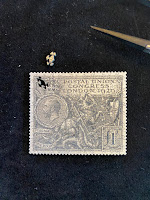 Steve had brought along a copy of one of the Lazels laser-cut micro jigsaw puzzles in many, many pieces… we all took one look at the tiny, tiny pieces and the tweezers required to manipulate said pieces and told him he was nuts – Rich on the other hand is always up for a challenge and duly sat down and completed the puzzle for Steve, who then very carefully packed it up assembled before any of us reprobates had a chance to disassemble it for him so it would fit better in the tube. 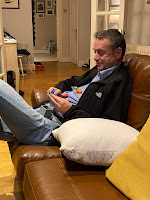 Come to think of it there wasn’t an awful lot of mischief this time around – there was some reminiscing of happiness-based mischief-past, but no new mischief was visited upon anyone - including Kevin- despite what he tells anyone! ;-)

Somewhere around five-thirty we packed everything up and I got a call from Rob to say that he was waiting outside the estate so we all headed up the road to chez Walker for the obligatory fish supper. We found Rob at the gate – it’s a long story that involves mixing up dates but he made it in time for the fish supper, and of course for most of a day’s puzzling at my place. 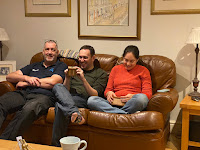 While we were getting dinner organised we discovered that Ed’s train, and indeed Peter and John’s, had been cancelled due to the delights of Avanti’s inability to make pea soup in a brewery. As a result a fair amount of reorganisation ensued and shortly after said fish supper, Gill took the three intrepid travellers off to Birmingham International in order to catch an earlier train – which from the sounds of Ed’s IMs, including the unforgettable “Train is stopped. There is now discussion of postmen delivering dildos. V v loud discussion.” – which I can only assume had been spiced up considerably by autocorrect. They did get home safely that evening. 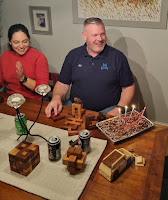 There was a fair amount of puzzling fairly late into the night, but before all of that, there was also cake – birthday cake for Ali who’d celebrated his birthday the day before – Happy Birthday Ali!

With most of the folks safely en route home, Gill and I set about turning puzzle cave number two into a bedroom for Rob for the night – the sound of which seemed to entice the final knot of puzzlers to leave, presumably so they wouldn’t have to take a turn on blowing up Rob’s aerobed!

Sunday was a lovely relaxed day of puzzling with Stefan, Louis and Rob, before the shuttle service to the airport kicked in to get the lads off to their respective flights… 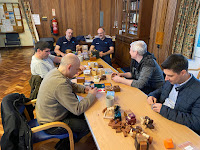 …another damn fine weekend’s puzzling with good friends… thanks folks!