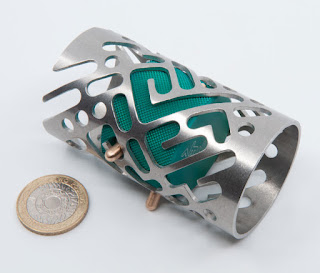 I first noticed Amulet when Radek posted some stunning pictures on Facebook – I liked the look of the minty green puck inside the steel cage with vibes very reminiscent of the Cooksey Maze – even if this one was inside out and appeared to have twice as many interfering bits… oh, and the maze is twisted forty-five degrees, but apart from that, it’s just like the Cooksey Maze!

Amulet is the result of a collaboration between Radek and James Stanley. They’ve taken a maze and wrapped it around a cylinder and given you a puck with two (almost! - thanks Michel!) perpendicular rods that engage with the maze. Each rod will move back and forth and at each extreme, will disengage from one of the sides of the maze, giving you an extra degree of freedom.

Using that technique will allow you to manipulate the little green puck up and down and roundabout while the little rods go backwards and forwards… simples! 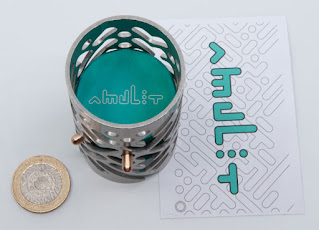 Once you get your bearings, there are some obvious paths to follow, and some of them do indeed seem to take you almost all the way to where you want to be, only you’ll find you aren’t near a usable exit…

Ah well, maybe it’s time for that old left-hand-rule … except you’ve got four hands and two of them are reversed because they’re on the back of the maze… there’s nothing for it but to just keep your wits about you… and maze on.

Find your way through it all and you’ll release the little green puck and meet your final challenge – which is really cute and the less said about it in here, the better!

Amulet is really well made – the steel cage looks like it’s been tumbled to within an inch of its life to get rid of any sharp edges, and the puck is a beautiful object all on its own – it’s a cool fidget toy and a great little puzzle.