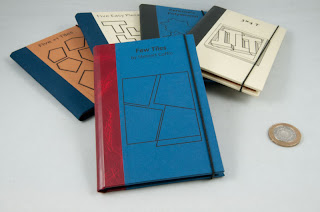 A while back I mentioned I’d found a couple of delightful little puzzles bound to look like books, on Bernhard Schweitzer’s stand at the Dutch Cube Day. I’d picked up a copy of Coffin’s Few Tiles and had really enjoyed the puzzle and rather liked the presentation … and shortly after I put up the blog post, Peter Gal, whose fine handiwork had produced the books, got in touch. A little while later I’d sent him some Paypal and he’d popped some books in the post … a few weeks after that, the books arrived, having been caught up in the Christmas post black hole, none the worse for wear.
Peter has a great range of books, including a bunch of more educational rather than puzzling ones, e.g. there’s a great representation of Pythagoras’ Theorem that physically demonstrates the formula by having a dissection of the pieces of the square sitting on the hypotenuse form two squares that each sit on the other two sides of the triangle – well worth looking at.
Selfishly, I was more interested in the puzzles and acquired a handful of them, including a copy of Peter’s IPP31 exchange puzzle – TriPenTile, but I'll leave that one for later. 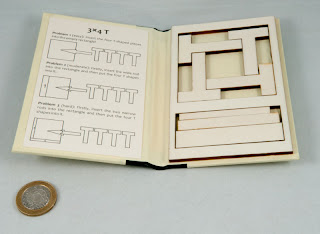 3*4T is a variation on the old 4 T’s puzzle…my earlier version of the puzzle came from Thinkfun but I suspect there are probably a few versions out there – it has a double sided tray and the challenge is to pack the four T’s into each side … one of which is trivial, and the other requires a bit of lateral thinking.
Peter’s version takes that idea and develops it even further, providing three challenges instead of two. The starting position (Challenge 1, technically) has all of the T’s orthogonally arranged in the tray-space and then a series of extra pieces is added to restrict the size of the tray and each time your goal is to place the 4 T’s back into the ever smaller tray… it’s not hugely difficult, but the extensions are great and make for a neat couple of challenges in a handsome package.
A nice little puzzle for introducing new puzzlers to the art of packing puzzles.
Five + 1 Tiles is a pentagon dissection puzzle – at first I thought it looked a bit like Markus Goetz’s puzzle over here – but a quick look at the pieces show it’s a totally different puzzle … there’s a pentagon-shaped tray for you to pack the six pieces into, and a space below it for one of the pieces so you can store it unsolved ready for the next victim. 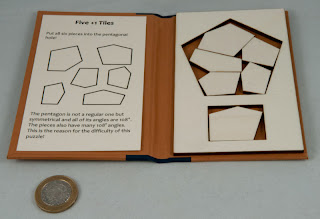 This one’s an intriguing little puzzle because effectively all you have is a 6-piece jigsaw puzzle where someone has given you the outside edge already, except if your brain is anything like mine, it’s hard-wired to think in right-angles and these 108 degree corners just don’t compute… add to that a few false starts (some of the internal angles mimic the ones you’re expecting to find on the outside – crafty sod!) and it actually turns out to be quite a decent little challenge … I found myself running round in circles for a while and then finding several ways of almost solving it where I’d have one piece left that wouldn’t fit in the space I’d left behind…
Five Easy Pieces is another classic Coffin packing puzzle. Objective: five simple little pentomino pieces to pack inside a square tray that’s just a little bit shy of 6 units square. There seems to be so much spare space in that tray when the Z-pentomino is sitting in the spare hole down below that this can’t possibly be much of a challenge ... except, this is a Coffin puzzle – so of course it is! Stewart C has used all of his keen observations on how people set about solving puzzles to pick just the right combination of pentominoes to totally snooker most puzzlers. 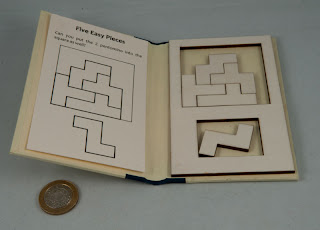 Some experimentation will almost certainly have you convinced that this thing isn’t possible – even trying the usual sorts of tricks doesn’t seem to solve this one ... it is very sneaky ... and Peter’s implementation is very sweet!
[It might be worth mentioning at this point something I hadn’t noticed until it was “too late”: Peter has kindly provided the solutions to his puzzles on the reverse side of the printed pages describing the puzzles on the inside cover ... just in case you find yourself totally clueless ... although I’ve been considering printing off my own versions of those pages without the solutions on the reverse ... just to help others avoid temptation, you understand.]
The last of the little books I got from Peter is a cute little packing problem based on Roger Penrose’s Polyamonds. The twelve identical pieces are all order 18 polyamonds, i.e. they are each made up of 18 equilateral triangles. Those twelve pieces then pack into a polygon that looks a bit like a hexagon if you squint at it, and that polygon will in turn tile the whole plane ... so starting from a pretty unusually shaped basic piece, you can effectively tile the plane – yeah, I know, mathematicians are weird! This puzzle asks you to find that tiling and it’s a neat little challenge ... it’s made a bit simpler by having the outside edge given to you and that cuts down on a lot of the possible starting points, but it’s an interesting construction that my brain was telling me is unlikely to actually work – and yet it does, rather neatly. 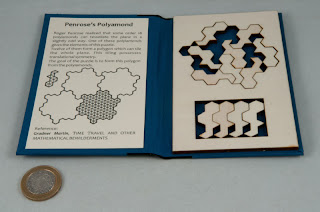 I’m very chuffed with my little collection of Peter’s puzzle books – they look great and each provide a neat little self-contained challenge. Peter’s handiwork is terrific and the laser-cut wooden bits ensure the puzzle works exactly as intended (!). I highly recommend these little books as travel puzzles or unintimidating puzzles to introduce folks to packing puzzles. Peter’s great to deal with directly and his prices are jolly reasonable too ... drop me a note if you want to get in touch with him.
Posted by allard at 21:57