What makes a good mechanical puzzle?

I found myself chewing this one over a bit recently and before I knew it, it had started growing arms and legs and turning into a blog post … it may be a bit philosophical, it will almost certainly be heavily influenced by what I like and it will be my opinions – feel free to have some of your own and share them if you’d like by leaving a comment or three down below…
The topic seems to come up from time to time on the usual puzzle forums and it’s always interesting to see the variety of responses – there almost certainly isn’t ever going to be a single, agreed answer. Heck, I doubt you could get firm agreement on what aspects should even be considered, let alone their relative importance or how to combine the various aspects that make them up!
For me, it’s about the joy of discovering stuff – so my ideal puzzle starts out with something that seems totally impossible and then takes you through a series of discoveries (“A-HA!” moments) that slowly let you in on the secrets it holds until you finally open it / close it / assemble it and reach your goal. So let’s unpack that a bit… with tongue firmly in my left cheek, I reckon:
Where: 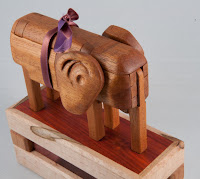 It probably sounds obvious, but it should have a clear goal – any mechanical puzzle that needs a significant explanation of what the goal is, is unlikely to be a really great puzzle – give anyone a scrambled twisty puzzle and immediately they know that they need to get the colours on the faces matched up … they might not know how to achieve some aspects of the solution without consulting an algorithm, but everyone intuitively knows what to try and do with them. (Yes, I know that it’s less obvious with some shape-shifters where you might not be able to even recognise what the target shape should be, but you get the point – stop trying to be difficult!) Multiple sequential goals, each of which logically tees up the next are even better (and I’m thinking of some of Pavel Curtis’ puzzles here where you uncover them one layer at a time, a bit like peeling an onion).

When it comes to mechanical puzzles, fewer bits are always better than lots of bits. Making puzzles harder by adding pieces may make them more complicated, but it doesn’t necessarily make them any better. Think of the two-piece pyramid puzzle – two simple little pieces have to be combined to make a tetrahedron (or pyramid, if you aren’t among friends!). There’s a real elegance that comes from having a smaller number of simpler pieces to a puzzle – in my books, some of the best packing puzzles have four simple pieces to fit into a tray. Your brain tells you it should be simple – experience tells you it isn’t!
I suppose there’s a temptation to say that this rule wouldn’t apply to jigsaw puzzles (if you consider them mechanical puzzles) – except I think it does apply, within reason …my favourite jigsaw only has a couple of hundred pieces, but they’re mostly different shapes and have whimsies scattered around the place – I can honestly say that I find that one a ‘better’ puzzle than some of the 1 000-plus piece monsters I’ve had a go at – and I don’t expect to ever get too keen on starting one of those 32 000-piece Ravensburger mega-puzzles! …but I can’t wait to get my hands on a copy of the Four Colour Map Puzzle from Artifact Puzzles and it only has 68 pieces … but just look at the shapes of those pieces… 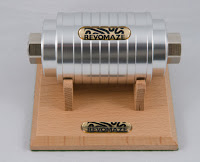 Good puzzles should provide at least a reasonable challenge – they need to keep you occupied for a bit at least (are they really puzzles if they don’t?) – they need to earn some respect before they give up their secrets. I always find it a bit of a let-down when I look at a new puzzle from a distance, decide what the goal probably is and then take a guess at the likeliest solution only to find out that’s exactly what it is when I pick it up and just apply the solution – and I fully realise that it all depends on what you’ve seen before and how much experience you have of solving mechanical puzzles, and that to some extent your views will be influenced by when during your puzzling life you came across a particular puzzle and how on-your-game you were when you first saw one – but I guess what I’m really saying is that trivial puzzles with an obvious solution aren’t likely to be high on the list of great puzzles in my books. 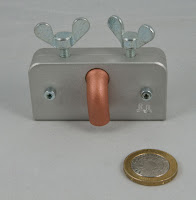 There’s probably a down-side if puzzles provide too much of a challenge … I’ve spent hundreds of hours (literally!) on a single puzzle spread over several months before I finally cracked it –and trust me, the sense of achievement was pretty sensational – but I don’t think there are many puzzles that I’ll invest quite that much time in. There are other sorts of puzzles that (for me) take a lot of thought away from the puzzle itself – so they tend to sit on my bookshelf above my desk for ages – and every now and then I’ll take them down, try a couple of things and then put them back and leave them alone for days or weeks at a time – Roger puzzles fit this category rather neatly – I find they need you to try lots of things, often unusual things, and they can be pretty devious little things … in fact at the moment there’s a row of three of them that have been staring at me for quite a while now … all unsolved, so far ….
Good puzzles give you a sense of achievement – and to some extent I suppose that’s the flip-side of the previous point. Everyone (OK, we puzzlers…) loves conquering a puzzle and getting the better of it – proving that you’ve found the right technique to work out what the internal mechanism must be to release that final catch and open the box – or be able to deduce how to fit those shapes into that tray in a way that your brain wants to tell you cannot be efficient enough.

Good puzzles give you “A-ha! moments”. Great puzzles give you several of them. For me personally, these are the drug that makes solving puzzles so addictive – that briefest little moment of insight that comes after trial and error and thinking deep thoughts when suddenly there’s a tiny flash of inspiration and an inkling that that might actually work – the moment when the grin creeps across your face no matter how jaded or experienced you are when you realise that you’re onto something useful. That’s the real buzz of solving puzzles for me – that’s the bit I remember best about solving puzzles … it’s that first time you spot something behaving unexpectedly and then wondering why it did that, or postulating a theory about what might be in there and then coming up with a way of testing the theory, trying it and realising that it might actually be part of the solution.
Great puzzles have an elegance to their mechanisms or their solutions – think Cast Marble. Maybe there’s an inner-engineer in me trying desperately to come out, but I really appreciate elegant designs that don’t complicate things unnecessarily. Implementations of the simplest means of achieving a particular mechanism / trick or disguise are best. Bonus points for re-using things in unexpected ways … 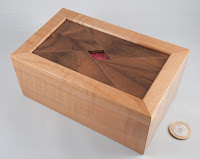 Call me shallow, but I like puzzles to look attractive as well – and I guess this is where we seriously start getting into the realms of personal tastes! I really think that a beautifully made hardwood puzzle looks inviting and displays well – I like the idea of puzzles that look good on their own in a puzzle cabinet, ones that look a bit different and ones that show off their creator’s skill and craftsmanship. 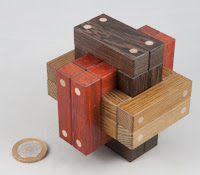 I also think some puzzles should get bonus points for things like having an extra little hidden compartment in a puzzle box beyond the main challenge, or for being puzzler’s puzzles – where they’re specifically designed to use a puzzler’s knowledge of similar puzzles against them finding the right solution … often resulting in non-puzzlers who are unencumbered by “knowing what the answer should be” being able to solve them faster than “real puzzlers”.
…so that’s what I think makes a great puzzle – what do you think?