My copy of Roger’s Wasserhahn (literally the German for ‘tap’, or ‘faucet’ if you speak the other version of English) has been staring at me from my shelf-of-puzzles-to-be-solved for months now. Every now and then I’ve fancied a shot at it and tried to come up with something new, and every time I’ve been disappointed…until this past weekend. 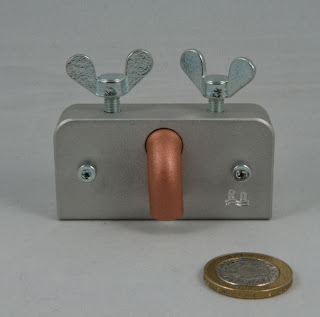 Wasserhahn has a copper coloured spout coming out of the front of the standard Roger-sized block – and there are a pair of wing-nut-headed bolts screwed into the top of the block on either side of the spout. The spout will spin around freely no matter what you do to the puzzle, and peering into it doesn’t give anything away  … unless, maybe, you could peer around the bend in the spout, and shine a light in there while you’re at it – flexible endoscope anyone? (Nah, didn’t think so … that just wouldn’t be cricket, would it?) The bolts can be screwed in and out about an inch each, with no discernible effect whatsoever. In the innards, you can hear something that sounds a lot like a ball bearing, and probably something else, that doesn’t sound like a ball bearing – more like a small strip of metal sliding around in a channel of some sort.
As is customary with Rogers, the puzzle doesn’t come with any instructions or clues (although I have heard they used to come with solutions!), but if there were to be an aim, I’d guess it would be something like “Free the water” – entirely logical for a tap, not so?
Anyway, there I was, occasionally playing with it over the course of several months, and getting nowhere, when one day Wil Strijbos was playing with one of them and asked me if I had one (and the thought crossed my mind to deny all knowledge of the puzzle and buy one from him, effectively restarting the clock on my failure to solve it!) – I admitted I did and that it was defeating me, so he stared me in the eye while chatting about something else and began fiddling around with his copy out of sight and then promptly brought it out from behind his back having supposedly (!) removed a ball bearing from it – a little drop of water from the tap. I was more than a little gobsmacked – not only had he done this right under my nose, he’d been chatting to me at the time about something else entirely and didn’t seem to be concentrating particularly hard on opening it, yet he’d literally just solved it there and then … like a damn good close-up magician. 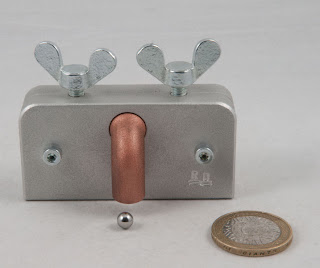 I struggled for a few more months after that, and still got absolutely nowhere – in fact Wil’s helpful demonstration probably did more to throw me off the scent than actually help me, as I subsequently discovered. I’m sure he didn’t mean to do that, just a fortunate by-product… :-)
Ages later I was chatting to Nigel about this puzzle (he’d recently come across one as well) and he said something that made me ask a couple of questions – which in turn rapidly led me to the solution – and I’m really glad we talked, because there is absolutely no way I’d ever have found that solution on my own – I would simply never have done that to one of my puzzles (!) – which is saying quite a lot as I have a reputation for being a bit ham-fisted. I’d already tried tapping, bashing and knocking things – sometimes enthusiastically! I’d spun various things, many ways, shook it senseless – nothing!
However, having had the seed sown in my mind during that chat, I solved it in one hand while holding the phone in the other and chatting to Nigel … but I’d never have got to it on my own… Thanks for the nudge, Nigel – you’ve helped me free up a little space on that shelf.


Postscript: It seems that a few folks have been led to try and drown their puzzles after reading my blog - please don't - while I don't think you'll do any long term damage, it won't help and that's not what I was alluding to. And shame on you! :-)
Posted by allard at 22:05