Back in January last year Eric Fuller offered some burrs linked by a bit of a theme for sale on Cubic Dissection – and I was a bit slow on the uptake and managed to miss all of them at the time – you have to be quick when Eric offers puzzles for sale, they never last long!
I’d managed to acquire a copy of Three Sticks Trapped from Oli a few months ago, but more recently I managed to pick up a copy of Four in Two and Five Piece 28 as well – completing the Three - Four - Five themed set of designs by Stéphane Chomine from that offering.

Three Sticks Trapped is a cute little design that has three yellowheart sticks that fit into a walnut collar with a couple of little protuberances – simple!
Or not.
Two of the three sticks are the simplest burr piece possible (sometimes called the skeleton, it is the minimal structure – the least amount of wood to hold the two ends together) – providing maximum room to manoeuvre. The third stick has a bulge in the middle and, wouldn’t ya know it, it gets in the way all over the place.
There seems to be a lot of movement at the start – largely thanks to those skeleton pieces, and yet, in spite of that, disassembly is far from trivial! In fact, releasing the first piece takes 12 moves!
Along the way you’ll find a neat little surprise when the pieces don’t quite come out in the way you’re expecting and even seem to contradict Pauli’s Exclusion Principle.
Neat little puzzle that isn’t nearly as simple as it ’should’ be. 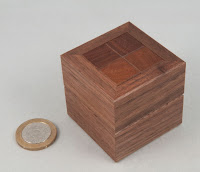 Four in Two is an unusual design that has four mahogany sticks passing through two square walnut collars. Each collar has a different set of protuberances on three of the four inside faces and the sticks are anything but simple. Fourteen moves are required to extract the first piece – and it’s not the one you’re expecting!
The first seven or so moves are pretty standard, but then the split collar comes into play and things start getting a bit funky.

Once you’ve removed the first piece, getting rid of the second one takes a further seventeen moves(!), and from there on out there’s pretty much enough room to make removing the last couple of pieces fairly straight-forward.
The split-collar gives this design a really neat little twist (figurative, not literal!), allowing you to make some space to manipulate the sticks in a rather unusual manner.
(I think this is my favourite in this little series) 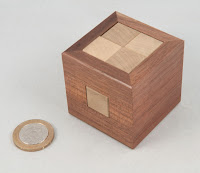 Five Piece 28, as you might expect, has five gum sticks through a walnut collar requiring 28 moves to release the first piece ... now the interesting thing about this design is that one of the sticks passes through the others at right angles, locking them in place in the collar.
At the start, there is a lot of movement – handily providing several blind alleys for the puzzler to lose himself down for a while... and given that there is a unique solution, there are a lot of ways not to solve this puzzle. 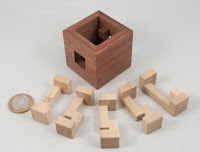 The solution involves not just the usual “let’s make some room” phase of solving this sort of puzzle, but adds in a little about-face that might make you think you’re doubling back on yourself and, as with the other two, there’s a bit of a surprise in how the first piece is removed – this solution is anything but linear, although no twisting is used in any of these puzzles.
A lovely little matching set of puzzles in Eric’s standard, practical size – beautifully made with just the right tolerances to stop you doing anything silly, and allowing valid moves to progress perfectly.

Thanks to Oli and Karl for letting me get my hands on this little set in the end, despite my initial tardiness!
Posted by allard at 18:18