Fast forward half an hour or so while we all head west to Barnt Green – I manage to get home before the boy-racers with their competing diesel (!) motors – three of us in the old 1400 Golf – with plenty of puzzles weighing down the boot, which isn’t useful ‘cos it’s a front-wheel drive  – so maybe they stopped for tea somewhere. 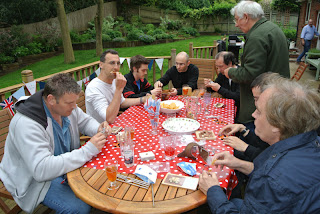 Virtually everyone from the Warwick meeting managed to make it back to my place for the braai – which was lekker! [Good Afrikaans word for you – probably the best English equivalent to “Great!”, or “Tasty!”, or “Cool!” – it’s a versatile and efficient language is Afrikaans ...]

I managed to get the car unpacked before the first tranche of puzzlers arrived and settled them down with drinks and reminded them where the puzzles were, at which point they promptly disappeared upstairs into the study ... guess where the puzzles are!

Once everyone had pitched up, I set about getting the Weber fired up and started burning the meat – I like to set expectations low, so I’d warned them all I’d be burning the meat – that way if I got distracted at any stage, I wouldn’t disappoint! Gill and Chris(tine) had done a great job on getting the house looking somewhat patriotic with Union Jack bunting everywhere and the table nicely set with a fantastic cake in pride of place...

While the meat was burning, I managed to sneak away every now and then (the secret of a good braai is to let the fire – or gas barby – do the work for you) to do a little puzzling or chatting with the assembled puzzlers. At one stage I noticed that there were only one or two folks outside (it wasn’t raining at the time!) so I wandered back up to the study and found eight or nine folks crammed into my study playing with the puzzles – which is great – but had I known, I could have got the Guinness World Record folks along and gone for a record on the largest number of puzzlers willingly in the smallest space!

When I mentioned that to Gill the next day, she told me that at one point she’d wandered past the study and asked them why they didn’t want to spread out to the lounge or outside, at which point Chris (without the ‘tine) had given her a plaintive look and said “But there aren’t any puzzles out there”.  I suspect that she may have made a suggestion as, a few minutes later, several puzzlers appeared downstairs on the deck with a number of puzzles each – cue quite a lot of banter and puzzling on the deck.

The Sandfield Salt and Pepper Shakers kept Kevin and Chris (sans ‘tine) amused for a while, and every now and then they’d ask someone a pointed question, and sometimes they got something useful in return ... although in the end they had to be opened by Ali after some serious head-scratching had failed to provide a suitable degree of assistance – I’d totally forgotten about a rather unusual technique near the end of the solution... thankfully Ali hadn’t.

Several people got conned into playing with  Peter Hajek's Matchbox puzzle, with an increasing chorus of people expressing their “horror” at “that point” in the solution – puzzlers can be cruel sometimes.

Wil had brought a couple of prototypes along to gauge interest and to test their puzzle-ness – the pair of new dovetail puzzles were a resounding hit with most folks expressing interest (and I’m sure I wasn’t the only one to offer to buy them before I realised they were only his prototypes!). Wil’s Lotus puzzle will be an absolute brute of a puzzle once he’s finished with it – he’s been working on it for a while and he keeps adding things to it so by the time he gets it into production it will be a multi-layered monster of a puzzle... he’d complicated it since the last time Louis had seen it and the extra bits did a fine job of keeping everyone out all weekend... so it might be almost good enough for Wil by now...

Abad’s Level 9 Burr entertained a few folks and Louis seemed to enjoy working through it – while Simon spent a fair amount of time on Constantin’s Nifty Fifty – although I don’t think anyone actually demonstrated a solution to that one while I was around. Brandenburg Gate seemed to amuse people with the way it seems totally impassable until you find just the right combination of positions and angles at which point it slides open in your hands... 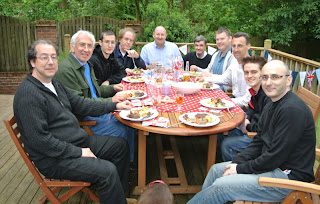 One of the unlikeliest of puzzles that had people quiet for ages was a little Lego creation of Wil’s – three chequered oddly shaped flat bits of Lego whose object is to build a symmetrical shape with a valid pattern. Louis had managed to find a solution or two, but Wil kept goading him on by telling him there were three solutions ... and I don’t think we ever found the third one, although Wil rather kindly left a set of the pieces behind for me to play with. [Don’t ask, the answer’s “No”.]

Amusingly, one of the puzzles that seemed to garner quite a lot of interest was the Periscope puzzle – a little wood, rope and ring entanglement puzzle that I got a couple of years ago – a couple of interlocked (really!) bits of wood allow some movement, a half-loop of rope embedded into one of the pieces of wood restricts some of the movement, and then there’s a ring that you need to extract. Quite a few folks ended up having a bash at it (successfully!) – including Wil, who had some complimentary things to say about it in Dutch to Louis (so he may well have been discussing the arrangements for travelling home the next day for all I know!) .

A little while later I decided I'd burned the meat enough and we started feeding the massing metagrobologists. Everyone good naturedly had a go at the boerewors – even those who’d had it the year before, which I took as a good sign ... there was an even better sign later on when most folks came back for seconds!

We cleared away the evidence and let things settle over a little more puzzling before insisting that everyone have ice cream and chocolate sauce – although there didn’t seem to be much protest at that point – I suspect they’d all come to the conclusion that resistance was futile by that point.

Yet more puzzling  ensued after dessert, and some time after coffee, the guys who had hours of travel ahead of them began to drift off homewards – eventually leaving Chris (just Chris), Louis, Wil and I puzzling until rather late that evening before we all agreed to call it a night.

Not surprisingly the entire household slept rather later than usual the next morning – even the hounds slept late! [That is unheard of!] Louis had done his usual of lining up the puzzles he’d solved after I’d gone to bed, on the desk for me to find in the morning (I swear that guy never sleeps!). 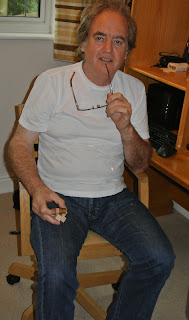 Sunday turned into a fairly relaxed day lounging around the house with the visiting puzzlers, talking puzzles, trying to open Wil’s Lotus puzzle (and failing) and talking about his exchange puzzle for IPP. The five of us including Chris(tine) went down t’pub for lunch and had a really great English Sunday roast for lunch – during which Wil entertained us with some rubber band magic and an interesting take on the buttonhole puzzle, interspersed with stories of famous puzzlers from around the world and some of the crazy things he’d got up to...

When I dropped them off at the airport, they calculated that Wil had ‘lost’ about 7 kilo’s worth of puzzles over the weekend – I have absolutely no idea where they went to, m’lord...
Posted by allard at 08:33