When Louis spent the weekend at my place for MPP6 and the Puzzle Braai, he gave me a pair of puzzles he’d made himself. I was aware that he’d started making some puzzle of his own recently, and had begun spending his puzzle budget on puzzle-creation devices (aka power tools) rather than on buying puzzles themselves. And I know he’s taking this resolution seriously because in the run-up to MPP6 not a single package arrived on my doorstep addressed to Louis! 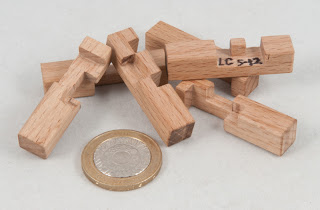 The first puzzle he gave me was a little oak six-piece burr – thoughtfully disassembled (!) and in a little plastic baggy. I had a quick glance at it and noticed two things, and at least one of them scared me:
Now one of those would have made it rather difficult to manufacture, and the other will make it rather hard to solve … I had a little bit of a fiddle around with it on the Friday evening and decided that the only way it was going together was with the help of BurrTools – but I wouldn’t resort to that yet, and certainly not in front of the man who’d made it and just given it to me – that could be seen as rude.
I took it along to MPP6 the next day and at one point Chris picked it up and asked about it, so I told him all I knew – it was a short interchange. Louis pricked up his ears and a little while after Chris had started fiddling around with it, he asked which burr it was and Louis answered that he was sure he’d recognise it – Chris protested a little and then Louis announced that he knew that Chris had one … which was just the clue he needed and it was assembled pretty quickly after that. 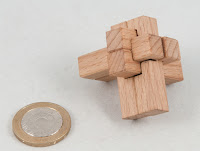 Turns out that Chris had deduced that for Louis to have been able to make that statement quite as categorically as he did, it would have to be a fairly well-known burr that everyone knew he had … and that possibly narrows it down to a reasonable number including a pair of aluminium burrs that Wil had been selling – and this was indeed one of them – Peter Marineau’s Piston Burr.
…so for his first ever attempt at making a burr, Louis has fabricated an oak Piston burr with offset arms… the latter a result of having made the sticks a bit too long to actually assemble them (one of the moves requires a piece to go around an end) so he added a feature in the form of a short arm and a long arm on each piece, giving the resultant burr a jaunty offset – and confusing and intimidating unwary puzzlers, like this one. 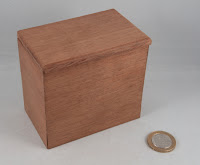 On a previous visit Louis had brought along a puzzle box that he’d made with only the most basic of tools – and it was a pretty good idea. A few folks had a bash at it and they were all complimentary and helpfully suggested some ideas for improvements when Louis began talking about his own ideas for developing the box further – some of those relied on some additional hardware (he’d already rationalised the need for a router without any help from us!) and ideas were thrown around and played with…
This time Louis arrived with his A-MAZING Box #3. The name is a play on one of his forum handles and the mechanism inside, and came courtesy of Wil, who named it after receiving #2 from Louis. On the outside it looks like a fairly nondescript box – on the inside, there lies evil. 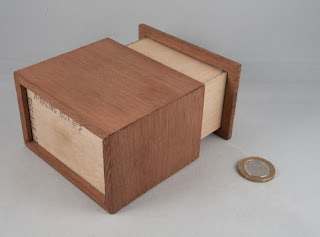 I first started playing with it on the Friday evening before MPP6 – and got virtually nowhere, so I hatched a sneaky plan and took it along to MPP6 in the hopes that someone might open it and I might get a clue to it’s mechanism … it was a great plan, and at various times during the day I got my hopes up when I spotted Wil and Chris playing around with it, however, the box remained locked tight. Uh oh!
The following weekend I sat down and had a serious bash at opening it, and it must have taken me about an hour – and I think it’s excellent! It gives a little feedback, and even having seen its predecessors, I’d totally over complicated things in my mind. While I was working on it I noticed that the bottom panel would move from time to time, so I developed a fixation on that for a while … and yes, I even tried spinning it and blowing into it – but I did not attempt to drown it! There are limits… 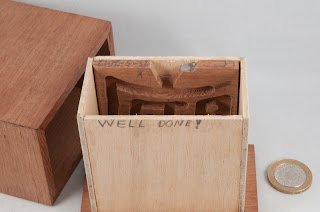 This puzzle has clearly been designed by someone who knows how puzzlers think – and he has used this against you all the way through – building in quite a few dead ends along the path to eternal happiness, or at least an open puzzle box, as the case may be … gosh I’m really glad (NOT!) that I mentioned that to him when he was here last time. He’s been more than a little cruel on some of those branches and forces you to eventually do what you really don’t want to do – it’s a really clever design – one of the things I put to him in an email after I’d opened it was “Heaven help us if you ever decide to take this seriously!”.
Louis has definitely put his new power tools to very good use and come up with a great little puzzle box.
Thanks Louis – there’s a special spot on my puzzle box shelf for this one now.
Posted by allard at 07:36