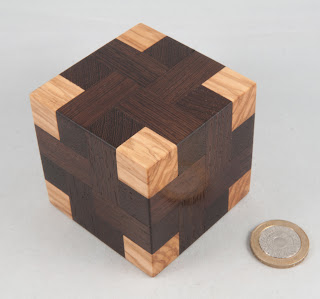 A short while back I was trading emails with Scott Peterson when he mentioned that he’d made a couple of copies of Coffin’s Involution and there was one going if I was interested –about a week later it was in my grubby paws.

Scott was telling me that Involution is possibly one of Stewart Coffin’s less well-known designs and was an interim stage in the development of the Involute Cube – with Mr Coffin then favouring Involute over Involution. Having played around with both of them, Scott reckons he prefers Involution – and frankly I was sold on the idea from the point where he said he had one available!

My copy is made of wenge with olive wood picking out the corners. I’ve waxed lyrical about Scott’s craftsmanship a few times in the past and this puzzle is no exception to that rule. The fit is that good that Gill was convinced it was actually a box or a solid block – there is no clue to where the first piece is going to come out at all, and given this is a Coffin design, you’re not going to find it easily and it’s probably going to involve some sort of a strange Vulcan grip. Visual inspection is totally pointless given Scott’s fine craftsmanship, so I reverted to a methodical fondling to find something that might move... 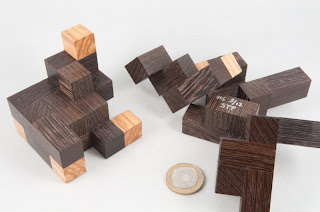 Like Involute, there’s a key piece, slightly more oddly shaped on this puzzle and removing it allows one or two other bits to move, which in turn allows some funky stuff to happen. The family resemblance between Involute and Involution is hard to miss – there’s a really interesting section a little way in where both will let you have plenty of movement, without any pieces looking like they’re going to come free ... and Burr Tools won’t help with either of them! :-)  If anything, the funky bit in the middle is slightly simpler on Involution than on Involute – and perhaps that’s why the great man favoured the latter.

The first time I took Involution apart it really felt like a voyage of discovery – each successive move was incredibly well disguised – the fit is that good that the pieces cling together and don’t move at all, until you find the right places to put pressure on the assembly to get something moving. This puzzle doesn’t give up its secrets easily and the combinations of movements required, and indeed the rotations required keep things interesting.

Some designs begin giving up their secrets more and more rapidly as you progress – somehow this design doesn’t do that and it continues to force you to think and analyse the possibilities right through to the end ... in fact, there’s a spot about halfway through where you’ve already removed four pieces, but there’s no clue at all as to where to look for the next piece to come off ... and Scott’s work is that good, that even the last two pieces stay solidly together until you work out what the two shapes are and how they come apart. 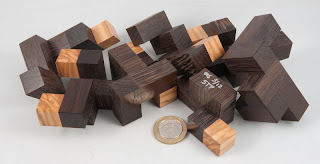