Marcel Gillen has been a prolific puzzle designer and manufacturer for quite a while now. Possibly best-known these days for his good-looking aluminium chess pieces – every collection needs at least one of them – he’s been making handsome brass and aluminium puzzles for years. With the advent of the Bits & Pieces versions of the chess pieces, there are certainly a lot more of them around – but I suspect that the quality of the originals can’t be beaten – although 'can’t be found for love nor money' might also be appropriate in that sentence! 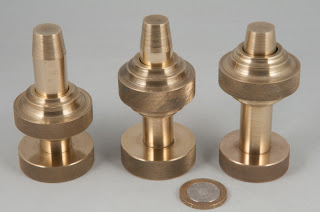 I’d at least seen some pictures of some of the original chess pieces in photos of various esteemed collections around the world, but when Wil Strijbos offered me a few Gillen Bolt puzzles, I drew a blank … I hadn’t heard of them and couldn’t remember ever seeing mention of them, so I did what anyone else in my position would do, and asked Google.
Turns out Google knew – and directed me to an early lot in Nick Baxter’s puzzle auction – where a couple of Gillen Bolts #6 had been sold a while back – and Jerry Slocum’s collection which has pics listed of Gillen Bolts #1 and 2.
Wil had come across a set of three Gillen Bolts (#’s 1, 5 & 6) and after my brief bout of Googling, I eagerly agreed to take all of them. Wil reckoned he hadn’t seen these puzzles around in absolute ages and Nick Baxter’s auction site lists them as “pre-dating 1994”.
When they arrived, the first thing that struck me was the sheer weight of them – these aren’t little bolts that have had a trick mechanism inserted into them – these are chunky hand-turned brass puzzles loosely in the shape of a bolt – a very large bolt – picture the sort of bolt you might use to keep a bridge together! 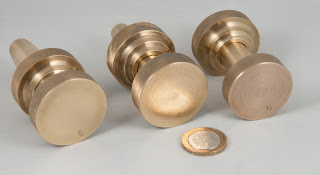 I started fiddling around with them and managed to sort out #1 fairly quickly – it’s a reasonably straight-forward mechanism and depending on how you handle it, you may get lucky as I did and not be too bothered by the locking mechanism … one down, two to go…
…and this point in the story coincides with our Midlands Puzzle Party #6 – so I took them all along for the world to have a bash at them – a few folks opened #1, but nobody got anywhere on the others, which made me feel a little bit better about not having opened them yet. At MPP6, Wil had brought another copy of Bolt #5 (or was it 6?) along and Ali snapped that one up – and then duly went and solved it that evening, proving he’s way better at this than I am!
The Bolts then stared at me from my shelf-of-puzzles-to-be-solved for a couple of weeks and then two Sundays ago I decided I needed to clear some things off the shelf, so had a more serious go at #’s 5 and 6… 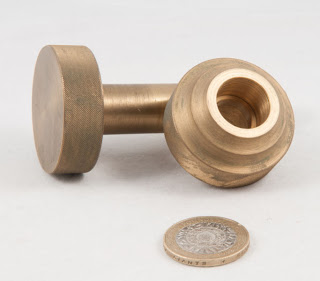 This time I applied a more methodical approach, and a Sharpie pen in the quest to open these puzzles – and the method paid off as I was able to understand first #5 – “seeing” where I could and could not go, and making some Sharpie marks on the bolt – and then working out how to get around the “obstacles” – great feeling when the nut lifted clear of the bolt.
Flushed with success, I threw myself at #6 and spotted some similarities in the way that the nut behaved – but got a bit confused when “coming” and “going” didn’t seem to work the same way – a little more brain was engaged, a theory concocted and duly tested, to provide a great little moral boost when it actually worked.
As puzzles, they’re really interesting – having seen #’s 1,5 and 6 – there is a definite progression in terms of complexity – and a change of gear somewhere in between. Filling in the blanks a bit, I’d guess that the set from 1 through 6 would provide a lovely set if increasing challenges to a puzzler. The craftsmanship on these puzzles is excellent – some of the parts have an amazing array of moving bits and pieces that all work absolutely perfectly – twenty years on. Testament not only to the design, but also to their crafting … they may look similar on the outside, but they’re anything but! And the relative simplicity of #1 belies the trickiness of #’s 5 and 6, whose elegant design makes some very clever use of some aspects that hide the true goings-on in there beautifully.

Very chuffed to have been able to add these rather rare puzzles to the little hoard – thanks Wil!


Postscript: Last weekend I got to spend some time at James Dalgety's Puzzle Museum and I asked him if he happened to have any of the other Gillen Bolts?

Hey, I thought it was worth a try!

Anyway, he points me at a drawer and I dive in to find piles of the things! So not only did I get to have a play with numbers 2,3 and 4 (and solve them all), but I also got to fiddle with number 7 (and I had a pretty good idea of how to get that one open but I didn't want to draw on it!) and play with a couple of unnumbered prototypes... Thanks James! 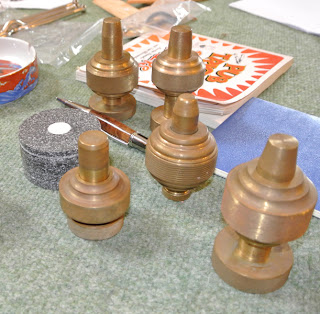