A bit of Karakuri fun 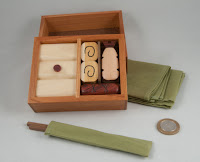 I recently managed to come across a couple of rather fun Karakuri puzzles that I hadn’t been able to get my paws on yet.

The lid lifts off the box to reveal the wooden meal inside – and it’s a rather neatly laid out traditional meal. A couple of little delicacies and a decent sized, if slightly hollow, portion of rice.

Experimenting a little will lead you to notice that the most likely secret-compartment-hiding-place is in the boiled rice space, and a little bit more fiddling around will identify the one or two moves needed to access it ... not especially challenging, but a very unusual-looking puzzle box – and I like the way that the various elements of the meal need to be used in order to open the box. 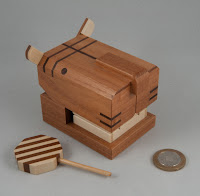 The next two little boxes are both products of the incredibly creative Shiro Tajima. Tiger of Carboholic was his 2009 Karakuri Christmas present and I’ve had a bit of a soft spot for it for quite a while. The toothy grin on the tiger, coupled with the slightly incongruous accompanying lollipop made it look rather intriguing. 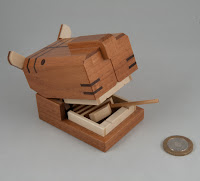 The tiger will open his mouth and yawn, and merrily chomp on the lollipop – and you can probably work out where the secret compartment needs to be, but there are a good few little red herrings to take you off track and keep you playing with this cute little puzzle.

The solution yields to a bit of Think(c)-ing and considering what you can and can’t do – although it sometimes needs a little bit of “encouragement”. Definitely one of the cutest little Karakuri boxes out there. 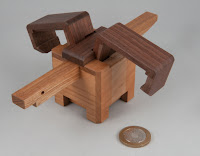 I’d been hoping to get a copy of that as a Christmas present but lost out on the ballot as it was oversubscribed, so I was delighted when I managed to snag a copy recently.

At the start of the puzzle, the dragon’s wings are securely locked down, so the first order of business is to release the poor beast’s wings so that he can fly ... and having done that, it’s pretty clear that there’s a compartment to be opened in his tummy – I say pretty obvious because it sort-of wiggles around quite a bit while you’re experimenting, but in spite of its wiggly-ness, it remains firmly attached.

You’ll need to spot a couple of other little things that might be useful, and then work out how to string them together before you will manage to release the cute little beastie’s tummy.


Cute little beggar ... anyone for a snake next year?