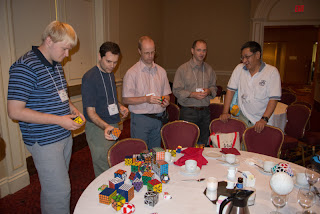 The Friday evening banquet was a slightly more formal affair than the Founder’s Reception the night before ... instead of milling around and chatting to one another with buffet tables around the corners of the room, we now had a couple of tables of Renegades and their partners. We were a bit late in getting in, so we ended up at a couple of tables next to the door – which ended up working out quite well when they announced the buffet tables outside were ready for us – we were near the front of what ended up being a really long queue for the grub.

We had a great bunch of folks at our table – we wound up sitting next to Kellian and Brian and had a great time getting to know them and hearing about the dancing scenes in various cities as Kellian and Lesley swapped stories about their dance endeavours.

The organising committee had left some puzzles scattered around the tables and I ended up spending a lot longer than I should have solving Markus Goetz’ Rhombus Flexing puzzle – in spite of having done it at home a while back!

Lennart Green performed some amazing close-up magic with the help of a couple of huge video screens on each side of the stage. Wil was telling me a bit about Lennart Green a couple of days later – it turns out he’s totally self-taught so all of his sleights are unique and aren’t what you’re expecting, making him very much a magician’s magician. Some of his work was absolutely incredible (in both senses of the word!) and I really enjoyed his show. 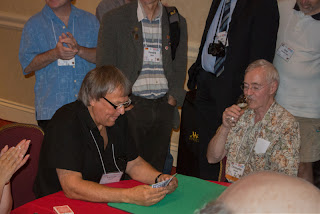 Unfortunately the magician who followed him wasn’t quite in the same league (technically or presentationally), but afterwards Peter’s mini bar key came out again as Kellian & Gill hadn’t seen it yet (and he was much better than the last bloke on stage). Having totally fooled her with the magical roaming chain, Kellian asked if she could inspect the key chain and without missing a beat Peter pointed out she was a married lady and that wouldn’t be proper! Superb!

After the formal entertainment was over, folks began milling around and a couple of tables of magic appeared – Todd Reis brought out his bananas again and Lennart Green sat down with a more intimate setting – about forty people crowded around a single table craning for a good view of the action – he didn’t disappoint!

At one point I wandered over to a table piled with twisty puzzles where a bunch of the twisty cognoscenti were deep in discussion – only to have my way barred by Rox telling me I couldn’t hang out here as I “wasn’t twisty enough!” – before dragging me over to show me something interesting on the table! While I was there James came over to demonstrate something that Oskar had showed him earlier: a cube where the opposite sides are connected by a gear train – except that depending on where in their phase the gear train is positioned, the effect on the opposite side is different ... e.g. moving the top layer half a twist moves the bottom layer a half a twist – so far so good – moving the top layer another half a twist moves the bottom layer a quarter twist – HANG ON! The next half twist inspired a full twist on the opposite side... now before you ask, no I hadn’t been drinking – that freaked me out more than a little!

After a while I wandered back down to the puzzle room where the hard core puzzlers remained. I had a serious attempt at Mike Toulouzas’ Vault and managed to solve it – it is a serious piece of art – a beautifully crafted wooden puzzle box that looks and behaves like the real thing it’s imitating. At first I was a bit confused when I’d discovered more tools than I thought I had a use for, until I tried closing the box ... turns out they weren’t red herrings after all and closing the box is a seriously non-trivial exercise! Superb work Mike – I love it.

I managed to solve the Double G puzzle – I really hope that someone picks up the rights to produce these, it’s a great puzzle. It looks really simple but those little tabs manage to find all sorts of ways to block everything that you’re trying to do... a masterpiece of simple, subtle design.

I had a play around with Jane Kostick’s Double Duals and enjoyed playing with this one as much as all her other puzzles – if not a little more. This one comes disassembled with very little clue to the eventual shape and once you’ve worked out which sets of pieces work together you can assemble one set and then add the other set – although it doesn’t matter which order you do it in ... hence the name – either set of pieces can be on the inside or on the outside ... she’s pretty clever with her geometry is Jane.

While I was playing away with a variety of things Robert Yarger was thoroughly investigating Jerry McFarland’s BurrBlock – he spent ages playing with it and examining all the bits as it came apart, and then the next day he and Jerry had a long chat about it .... he seemed pretty impressed and definitely seemed to be enjoying the challenge that night. 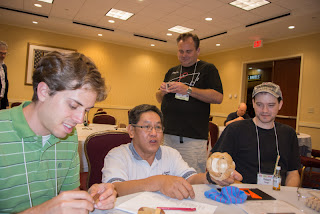 Chinny sidled up to me at some point and asked if I had one of his wobbly tops yet. When I said I didn’t he promptly gave me the last one he had, and when I offered to pay for it he refused any offers of cash and insisted that I buy a lathe and make three wobbly tops and give them away. Now anyone who’s seen these little marvels (mine’s about two inches tall) and understands the mechanics of using a lathe, will know that Chinny is both a master lathe-crafter and a little nuts! Having seen some clips of off-centred lathe-work with a chunk of wood spinning around trying to throw itself across the room at the craftsman, I’m pretty sure I won’t be trying that any time soon! Yet here’s Chinny giving me a beautifully made wobbly top, complete with decorative chattering and his trademark whistle in the top...

When we asked him about his off-centre lathe-work he replied “It doesn’t terrify me any more!” – I’m not sure I should believe him!

He hauled out a bunch of other little treasures that he carried around, including introducing me to La Boomba! Looking like a classic cherry bomb, this one is turned from coloured pencils and once opened it begins to tick loudly before letting off an explosion, all the while a menacing-looking Lego mini-fig glares at you ... that’s the sort of thing to expect from Chinny – he’s an absolute scream and it was wonderful to get to spend some time with him that night. Cheers mate!