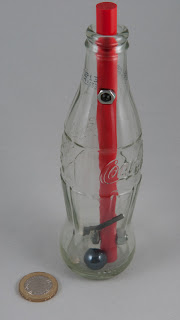 At the Dutch Cube Day I was fortunate to be able to collect a couple of Cola Bottles that Wil Strijbos had made up specially for me ... I’d mentioned that I was missing #5 a little while back after I’d had a go on Nigel’s copy at our last Warwick MPP and Wil had rather kindly offered to make one up for me. Wil had brought a crate of Cola Bottles along to DCD including a couple with names on them and one of those was a #5 for me ... and then hidden away in one of crates – so well hidden in fact that it took the best part of the day to unearth them, he’d also made up a couple of #7Bs ... so I took a copy of that as well.

Wil’s Cola Bottle #5 is easily recognisable as a Strijbos puzzle from the classic red stick and his trademark shiny silver-grey marble rolling around the bottom of the bottle. There’s a vanilla-looking nut and bolt down toward the bottom of the stick and a pair of nuts threaded onto a rod through the red stick toward the throat of the bottle ... and there’s a hex key rattling around in the bottle.
The rod can be pulled out a fair distance, but the marble and the hex key are staying in there for the time being. Now anyone who’s seen one of these puzzles before will automatically be drawn to using one of those little tools to try and unscrew the nut ... because that’s what you always do with these puzzles, right? So you fiddle around a bit and get the nut off expecting the screw to drop out of the rod ... except it doesn’t – it remains determinedly stuck in there, for no apparent reason... time to Think (c). ;-)

Some serious close up inspection will show something that you’ve probably not noticed until now, and then you’ll need to apply the little grey cells to work out how to make use of that, discovering along the way that Wil’s been a bit sneaky about exactly how he’s provided those tools for you – so they aren’t quite as useful as you might prefer.

It’s a great bottle puzzle and everything is there for a reason – nothing is superfluous – there’s a bit of dexterity involved in getting things positioned just right but I found that this combination of tools actually makes putting it back together again a lot easier than some of the other Cola Bottles.

...Probably one of my favourites out of Wil’s Cola Bottles...

Wil’s Cola Bottle #7B is an extension of Cola Bottle #7 which has a red stick through the middle of the bottle with three padlocks locked onto the stick – one inside and one either side of the bottle. There are keys dangling from each lock, but the outside keys will unlock the inside padlock and vice verse. Cola Bottle #7B extends this to two Cola Bottles joined by a single red stick with four padlocks: one inside each bottle and one either side of the pair of bottles ... and again the keys are all in the wrong places to be useful.

This one’s a bit fiddly, but the required manoeuvres aren’t too tricky. You might need a little trial and error to work out which outside keys open which inside locks, but you’re only ever going to have to go through the process once too many if you’re unlucky.

Definitely not the trickiest of Wil’s Cola Bottles, but it certainly has good presence on the puzzle shelf.

Thanks for making up a #5 for me and for letting me take one of the #7Bs off your hands Wil ... my Strijbos Originals puzzle shelf is beginning to get a bit full now! :-) 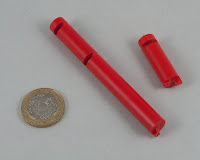 POSTSCRIPT: just after I took that photograph, I was in the kitchen reassembling puzzles for their closed pictures and I managed to drop the rod on the floor... and it sadly ended up breaking at one of the weak spots. So I confessed in an email to Wil and asked if he could please make up another one for me in between all of his travelling - and then a couple of weeks later, I had a message back from him to say he'd popped another rod in with my latest order - but that he'd forgotten the holes, so would I please keep the holes from the previous rod and use them on this one...(!)

The rod duly arrived, sans holes indeed, so I transferred the ones off the old rod and everything is all back together again once more. Thanks Wil. 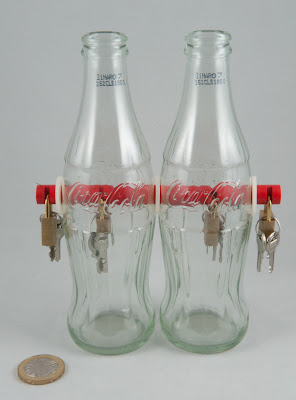