The latest little gem from Hanayama is a puzzle I’ve been wanting to try and get hold of for a while. 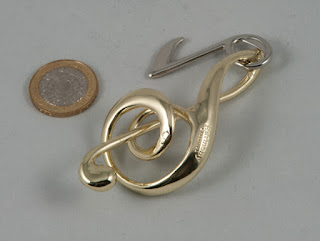 Harmony was entered in the 2010 Nob Yoshigahara Puzzle Design Competition at IPP30 in Osaka where it won the Puzzler’s Award and a Jury First Prize Award! So not only was it the most popular puzzle among all the folks who got to play with it at IPP30, it was also very highly rated by the puzzle-cognoscenti on the jury ... that’s pedigree.

The puzzle was designed by Kirill Grebnev and Dmitry Pevnitsky and had been available on Kirill’s web-site since the competition ... but it was being cast by hand and that came at a reasonably stiff price so I’d been holding back for a while ... but when Hanayama came out with their version, I grabbed one right away.

My copy came via one of my usual suppliers by the name of Strijbos, who happened to have a pile of them available at Peter Hajek’s End of Year Puzzle Party back in December. 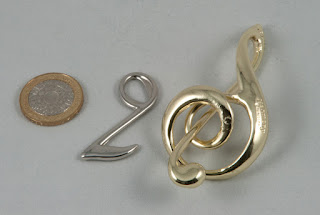 Harmony is a variant of a puzzle called Spiral designed by Kirill a couple of years ago ... and Dmitry’s contribution was to realise that it could be turned into a treble clef with a note hanging off it and I think that the combination is excellent! Without the added aesthetics, it would be “just another entanglement” puzzle, with the musical twist, it’s an elegant puzzle that stands out on its own. Topologically they might well be identical ... but that’s where the similarity ends.

The manufacturing is up to Hanayama’s normal standards so the puzzle elements all work perfectly and it looks excellent. Puzzle-wise, it’s not a particularly difficult challenge. You need to work out whereabouts to start from, and then it’s a case of working out what can go where and what orientation everything needs to be in ... a bit of exploring and you’ll find your way out without too much trouble. There are a few spots along the way where the movements involved are quite delightful – Kirill and Dmitry have done a great job designing this one ... and it’s clear why it was such a popular, and awarded, puzzle at IPP30.
Posted by allard at 07:38