Sometimes the simplest ones are best!

I’ve found myself fiddling with a couple of simple-looking puzzles for the past few months … one of them because I couldn’t solve it and the other in spite of the fact that I’d solved it!


As we were all packing up to leave DCD Wil Strijbos took a couple of rings out of his pocket and passed them round to a couple of us to play with – they were both 3-piece co-ordinate motion ring assemblies – one of them had rounded edges (which ended up with Ali) and the one I ended up buying had square edges.

Wil had helpfully given them to us in pieces … three identical pieces … so we did the obvious and tried putting them together – after a little bit of fiddling, Ali got his together but no amount of trying on the train to the airport, over dinner at the airport or in the departure lounge could coax the square edged one together. Eventually on the plane somewhere over the English Channel I managed to get it together… success!

..and together it stayed for a few months! Not because I wasn’t trying to take it apart, but because I was being thick! You see the tolerances on this little puzzle are so fine that unless you’re applying exactly the right force(s), in the right direction(s), this puzzle goes nowhere!

On his latest visit, Louis picked up the puzzle and separated it effortlessly – and I realised that I’d been heading in the wrong direction the whole time!

…so now I find myself absent-mindedly fiddling with it and opening and closing it in a rather mesmerising manner. (And it even goes together reasonably simply as long as you make sure that everything is aligned absolutely perfectly!)


On his last visit, Wil left me a copy of his little Lego symmetry puzzle – and it has managed to confound me for several months. (I know. I know. It’s not hard…)


One of the simplest looking little puzzles in the world to make, it consists of three odd-shaped Lego plates – and your mission is to make a few symmetrical shapes that preserve the checker-board pattern.

A couple of weeks ago I eventually managed to find one solution and I had to smile – serendipitously it was a shape that just happened to fit in with the festive season that was kicking off at the time – how cool is that? 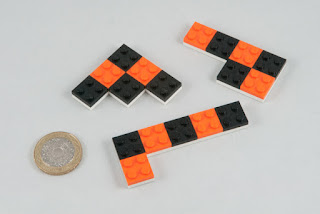 I haven’t got much further on it – but at least I’ve managed to find one solution, eh? Perhaps I’ll manage to find another in the New Year…
Posted by allard at 07:52