Saturday saw a bunch of the usual suspects meeting up in Warwick for MPP9. A couple of old friends showed up as well as a bunch of new faces... in spite of the foul weather that the Met office managed to conjure up for us!

I rocked up a few minutes late having had to stop on the motorway to remove a precariously dangling wing mirror, only to come across a chap who’d parked his 1-series in the central barrier at speed (he was fine) and managed to get two lanes of said motorway closed... so by the time I’d arrived, several folks were already there and unpacking, the tea, coffee and nibbles were already laid out and there was nothing left for me to help with... so I unpacked some puzzles, made a cup of coffee and piled into the banter, puzzling, and ritual winding up of Kevin, Oli and whoever happened to be nearest at the time.

I’d taken a bunch of Stickmen along under strict instructions from newcomer Jamie (“Bring your most precious Stickmen and the puzzles you took to Peter Hajek’s place!” was the direct quote I believe – how could I refuse?)   - and several folks had a go at them over the course of the day. I got a huge kick seeing the smile on Vadim’s face (he of TP-forum-fame) when he solved the Stickman Sliding Tile Box from scratch, finding both compartments without any prompting.

A few of the guys had a go on the Checkmate Box – I’d suggested they don’t bother trying without the solution in front of them and Oli managed to navigate his way through solving one half of the box ... but I suspect he was the only one who managed it on the day.

Joe had brought along a great selection of John Devost’s packing puzzles and I spent a while working on one of the Coffin designs, and got absolutely nowhere. (Nope, I’m not surprised either!) He’d also made up a bunch of braided dollar bills that he was dishing out to anyone who showed the slightest interest in them or in the impossible folded cards he had on display.

Bruce had brought along a fearsome collection of hedgehog puzzles, ranging from Wil’s Prague Special, through a series of wooden and aluminium traditional hedgehogs, up to a set of highly colourful and extremely funky Japanese creatures in cages.

Nigel’s table looked like a veritable Wil Strijbos exhibition – nicely themed with professional-looking labels for each puzzle – with just about every recent (and not so recent!) Strijbos cola bottle, aluminium puzzle and dovetail out for the world to play with.

Ali had brought along a set of memory drawers that we all had a play around with (how the heck does it remember?!) and a few of the guys brought their Super-Cubi’s along for a group photo with the King... how often do you see that?

Satomi’s table generally had a bunch of people clustered around it having a rake through the puzzle boxes she had for sale and judging from some of the pics of loot that various folks have already posted, I suspect she did OK out of it.

Ali brought the entire collection of Rocky bolts, Popplocks and a bunch of other very fine puzzles.

Several KCubes made an appearance although nobody had a serious go at Steve’s 3000-odd move one. Several folks had brought along various Revomazes in Neil’s stunning clear sleeves and there were plenty of admiring noises from those that hadn’t received theirs yet ... it was fun watching Joe solve my Gold without the benefit of the combination code... :-)

Steve Nicholls has clearly been exercising his 3D printer and had a crate-full of printed puzzles for sale, including a couple of the very latest super-high level burrs that have literally only just been published! A couple of those found their way to a good home ... and I couldn’t resist a psychedelic peanut and a rather patriotic-looking CubeBurr before I had a root around in Steve’s crates of spare puzzles – anything for a fiver! – and helping myself to a bunch of heavy metal entanglement puzzles (that I’m rubbish at!). 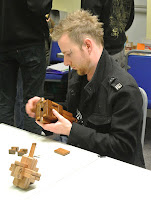 Steve’s copy of Ned Kelly got a thorough dismembering courtesy of Adin – who did significantly better than Chris and I had managed at James’ place a little while back when we could only get as far as ripping his chest open...

Things only really started to wind down at about 6pm – after we’d been going for 9 hours solid! I reckon that says a lot about what happens when a bunch of puzzlers get together and someone throws in some random puzzles. 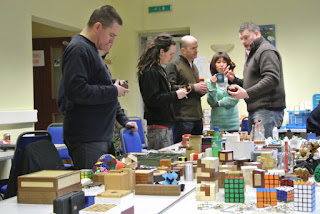 As Gromit might say “That were another grand day out.”