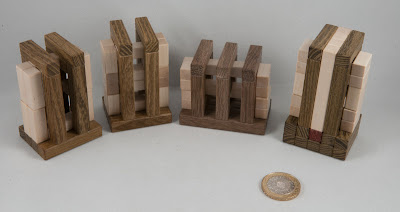 It feels like ages since I sat down to write about puzzles... not just because there have been a bunch of posts about strange geometric constructions, but because I've been swapping out my old PC for a new one and that invariably ends up swallowing several hours / days / weeks until I've got things back the way I want them ... anyhoo - as of yesterday, I think that little piece of joy is now behind me... so back to the puzzles!!

Ali, one of my puzzling partners in crime recently dropped me an email passing on an offer of some new puzzles from Jakub Dvořák at the New Pelikan Workshop. The email listed a bunch of puzzles from Yavuz Demirhan and Osanori Yamamoto and the accompanying pictures looked pretty good, but to be honest, the prices listed made them just simply too hard to pass up ... so I felt a little guilty when I went back to Ali and asked if he could add one of each onto his order - until I discovered that that was exactly what he and Nigel had done as well... and so the three of us ended up ordering a set of Jakub's latest puzzles each. 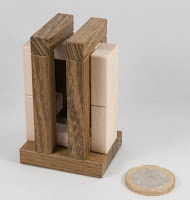 They duly arrived a little over a week later and I was well and truly gob-smacked at the quality of these puzzles that had effectively cost me an average of fifteen quid each - absolutely fantastic.

The first four puzzles are all designs from Yavuz Demirhan and you'll see that they share a common family theme - they all consist of fixed frames with a set of burr pieces to be inserted / removed from the frames. Each has a unique solution and as you might expect, as the number of pieces rises, the level of the solution rises with it... 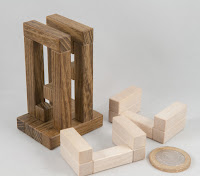 Pylon 2P2C is the simplest of the group having two burr pieces (2P) trapped between two columns (2C) ... it looks like there's a fair amount of open space between the columns, but the protrusion in the frames severely cuts down what you can do with the pieces... that said, there are a few things you can do with the pieces, and a little experimentation will take you down the pathway to the level nine solution and removal of the first piece ... and then another nine moves will release the other piece. It's a nice little puzzle that shouldn't hold up a seasoned puzzler for more than a couple of minutes.

Columnata 2P3C ups the ante a little by throwing three columns into the mix along with two skeleton burr pieces. Adding the third column, even though it only has a single internal protrusion, takes this up to level 12.

Although it's not as straight-forward as Pylon 2P2C, a little experimentation will show you what can be done, and how the pieces might be able to get past one another and then ultimately out of the frame - again, this one should be accessible for most... 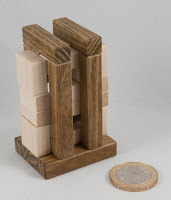 Columnata 3P2C makes things a lot more "interesting" with several protrusions inside the two columns and a lot more wood in the three burr pieces - so instead of dealing with simple skeleton pieces, they now carry a lot of their own restrictions with them... and that brings a lot less freedom to the equation. Experimentation will show you where the main problems are going to come from but not going to show you a way out very quickly ... this puzzle takes 19 moves to release the first piece, after all. 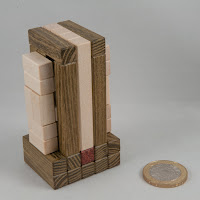 The last in this set is called Guillotine - it looks a bit like Columnata 3P2C, except there's an extra board inserted between the two columns ... and that board is free to ride up and down in the tracks - much like a Guillotine , only slightly less terminal. 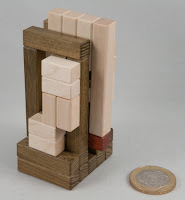 The burr pieces on Guillotine are once again skeleton pieces, but the combination of the frames with a few interesting protrusions and the moving board with not a lot of extra holes in it makes for a really interesting puzzle. 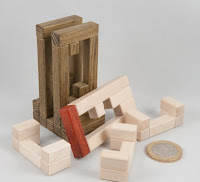 Even though this one "only" has a level 18 solution, it's easily my favourite in the set. The combination of the board moving in two axes while the burr pieces are "free" to move in three axes, albeit trapped by the fixed frame, makes this a great puzzle to get to grips with.

Four fantastic little puzzles from Jakub and the guys at the New Pelikan Workshop - tremendous quality puzzles and fantastic value for money... can you tell I'm a big fan?
Posted by allard at 17:39