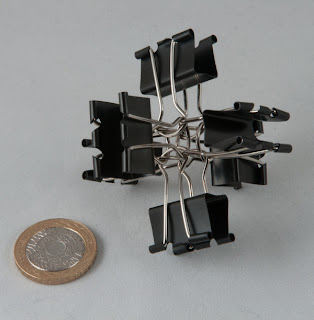 Having seen a pic on Oli’s flickr stream I’d been reminded of some rather interesting-looking constructions made out of binder clips – and decided that in the spirit of my current explorations of all things creative and vaguely mathematical (using both terms extremely loosely!) I should have a bash at them ... so I did what I’m sure everyone in my position would do, I ordered a large box of binder clips from Amazon and spent some time surfing.

I’d drawn quite heavily on George Hart’s stuff on the web – particularly his Math Monday blogs (which I think are great!) when I was fiddling around with playing cards – and during that research (!) I’d come across Zach Abel’s web site and seen some thoroughly awesome structures made out of binder clips and paper clips – and knew I had to have a bash at some of the simpler ones... I was going to have to restrict myself to the simpler ones as I’d only ordered a hundred binder clips! (Well that’s my excuse, for now...)

I started out with a couple of “Stressful” structures like the ones I’d seen on Oli’s flickr stream. The little monsters have three pairs of binder clips forming the X, Y and Z axes – and the only catch is that the clips are all back-to-back and stretched in the open position – so every single clip is in a pretty stressed position and the entire structure probably has quite a lot of potential energy hanging about in it – yet the final structure is pretty well balanced and fairly safe to handle – well safe enough to toss across a table to an unsuspecting fellow puzzler, at any rate. [Nigel survived!] 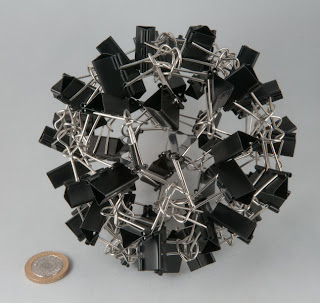 Zach’s web site includes a note that the although the structure has a huge amount of tension in it, actually building them shouldn't require much more force than you’d ordinarily use to squeeze them open... and I’d add to that you don’t need any additional tools or jigs either – just a pile of binder clips.

One word of warning might not be amiss here – during the construction process, before things are nicely locked together, you might want to be a bit careful – I had several clips launch themselves at high speed in random directions around the puzzle-cave.  [No dogs or puzzles were damaged in the production of these structures. Professional driver on a closed course. Your mileage may vary. Objects in the mirror may be closer than they appear.]

Next up I wanted to try my hand at one of the larger structures and decided on the 60 clip sphere over here. This structure relies on the interlocked arms for the shape and support so it’s a lot ‘safer’ than the previous structure. You make up sets of five interlocked clips forming a Borromean structure using one arm from each of five clips. The spare arms are then joined in sets of three interlocked arms in the same Borromean structure to another set of five, such that you end up with exactly two common sets of three between every adjacent set of five ... if you’re struggling with that, think of a football – or a truncated icosahedron if you’re that way inclined! [Although, if you were that way inclined you were probably asking yourself why the heck I didn’t just say that right at the beginning!] 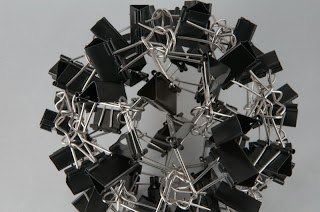 I made up a dozen sets of five and then set about joining them all up in the prescribed manner... about two thirds of the way through I was having some trouble working out what went where and keeping the shape right – I found it was collapsing on itself – I persevered and fitted the last section hoping that would magically pull everything right ... except it didn’t. I’d noticed that the joints had all gone a bit floppy, so I began pulling them outwards to tighten them up, again hoping that would be the magic solution – it wasn’t... at that stage I enlisted the extra pair of hands in the house and we tugged and finessed and fiddled around but it was still pretty floppy (Gutter. Mind. OUT!).

At that point I spotted one or two of the sub-assemblies were going the wrong way ... so instead of a clockwise Borromean structure, some of them were anti-clockwise ... i.e. some of them had been inserted upside down. I detached them and inverted them one by one and then something magical began happening as the whole structure began to sit up and fill out... and by the time I’d fixed the final one, the structure was totally self-supporting – all I had to do was squeeze the joints a bit to tidy them up and even out the structure. Et voila – one truncated icosahedron made up of 60 interlocked binder clips. 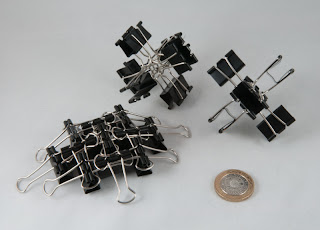 At this point I still had quite a few clips left over so I made up a bunch of “Stressful”s to throw at random puzzlers I might come across in the next few weeks and then tried my hand at the basics of one of these – I got as far as locking 11 clips into the basic structure and I have to say that Zach has earned a huge amount of respect from me – the work involved in doing just a tiny bit is significant – I can’t imagine how long it must have taken to build the complete Impenetraball – it’s quite amazing how the basic structure already demonstrates the beginnings of the curve with only 11 clips in place... although how the heck he knew that would work in the first place is well beyond my ken.