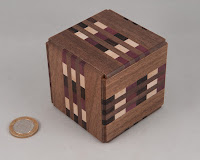 [This blog post comes to you from somewhere off the Swedish coast in the Baltic Sea ... if this works...]

...recently I’ve been on a bit of a Karakuri box binge...  it started out reasonably cheaply when I picked up a New Secret Box III (among a number of other nice little puzzles from Japan) for a smashing price.

On the outside it’s a reasonably handsome looking box with three stripes on it (for III – the other versions have one and two stripes respectively). It’s a fairly simple box conceptually – each panel needs to be moved, in the right order, all around the box ... and you need to work your way around the box three times (hence III, again) – there are no particular tricks to it as each panel successively unlocks the next, and so on, until the final move releases the lid which then slides open. 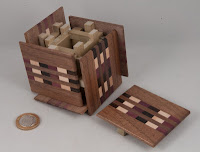 Inside the box is a little thing of beauty! Wonderfully made and a terrific introduction to Japanese puzzle boxes for anyone who hasn’t seen one yet – the complexity of the pieces and their accuracy is a lovely thing to behold...

I also picked up a Kamei Dice Box from Satomi – the price was simply too good to resist adding one to the collection. I know there’s a clue in the name but this one looks like a giant dice (die? Any pedants out there?) except that the numbers haven’t quite been lined up properly – you know – opposite sides don’t add to 7 ... how sad am I that that’s the first thing I spot about this box?!

Turns out that’s vaguely useful ... he said, dropping in a little clue ... I like the way this box opens –totally unique opening mechanism. 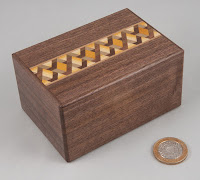 Next up is a few boxes resulting from a recent Karakuri Club email announcing some new puzzles... I opted for two of the new ones and a copy of an older design that I hadn’t added to my collection yet.

Byway Secret 2 by Hiroshi Iwahara is not a new puzzle by any measure but it is a classic! I’d had the pleasure of playing with a couple of them in the past, but I thought I needed to have one in my own collection, so given that I was going to be getting a couple of things from the Karakuri folks, I added a copy to my order...

It starts out like a really simple puzzle box with the top sliding open in a couple of moves ... except it’s a lot shallower than you’re expecting it to be and there’s a raised plate on the bottom with some Japanese writing on it... not sure if there’s a clue to the next move in that writing or not, but some closer examination leads to the interesting twist that makes Byway Secret a rather interesting little puzzle box ... and another 10 moves sees the main compartment come open. 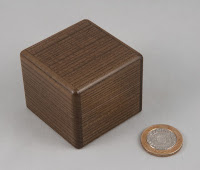 Ring Box by Hideaki Kawashima is a little gem – one of the new boxes on offer, it’s made of ancient keyaki wood with a lovely green colour to it and it literally looks exactly like a classic little ring box. There’s a little card in the box that helpfully tells you that your goal is to remove the ring ... and that actually is important as you might be tempted into thinking that you’ve finished before you actually have... I was! 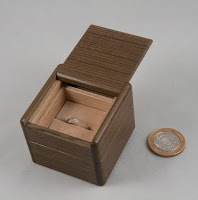 While this one looks like a ring box and all the visual clues tell your brain that it should open like a normal ring box – it won’t. (Yip, first thing I tried!) Hunting around you’ll find that in a couple of moves you can open the top and see a ring nestling inside. (Yip, it looks like a traditional ring box in there!) I was tempted to think that I’d finished – until Neil pointed out that the ring was held firmly in place and it wasn’t budging!

Cool ... I like that – little bit of a teaser ... set back to work again and a few more moves and the ring is now released...

I really like this little box – especially the fact that it teases you in the middle like that ... gives you a sniff of victory and then makes you try harder...

The other new puzzle is a fresh design from Akio Kamei called Three Sticks. The web-site’s description explains that the craftsman’s intention was to create a puzzle that looks just like three sticks... and he’s succeeded (!).

These matching sticks in walnut, oak and magnolia have markings branded on one face and they do literally look like three nicely finished sticks ... in fact if it weren’t for the fact that some of them feel a little lighter than you might expect, you’d be tempted to actually believe that they were just a set of sticks. 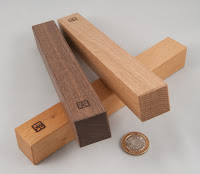 Going to work on them you soon realise that one is a fairly traditional puzzle box mechanism except for the fact that the seams are wonderfully well disguised ... another is a pretty unusual mechanism – not that tricky but a little surprising and again, you’d be hard-pressed to spot any tell-tale signs of what’s going to happen – even when you’re looking in the right spot! ... and the third one achieves exactly what the craftsman has set out to do – perfectly!

...the third chapter in my latest Karakuri binge is all Wil’s fault! I picked up a Kamei Money Box and a couple of String Boxes by Fumio Tsuburai as I didn’t yet have any of them in my collection and Wil had some spares available for sale. 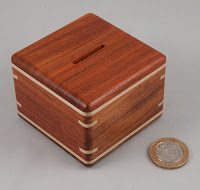 The Money Box is another little gem of a box ... it looks like a rosewood money box with a slot in the top and some experimentation will lead you to believe that the bottom might just be a sliding panel... but nothing you do at this point will get that box open! You will need to make use of it, properly, and completely – and at that point the base will magically slide open – I love the fact that the only way into the box is to use it ... and it will open when it’s good and ready – but not until then. 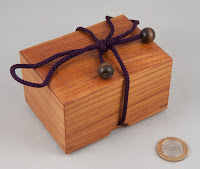 The Christmas 2011 String Box has a single piece of string with a pair of wooden beads on its ends running through the base of the box – some sort of a locking mechanism steadfastly stops the top from being released until you work out the combination of tugs and moves required to release the latch ...locking it up again is a simple matter of replacing the lid. Neat! 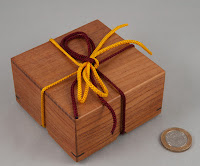 The Christmas 2012 String Box has a pair of brightly coloured cords coming out of the four sides of the base – tugging them in various combinations and orders sometimes gives a different feel ... and learning how to string (sorry!) a series of useful moves together in a combination is the secret to opening this box ... and it’s a lot trickier than the previous year’s String Box ... in fact I happen to know that it kept some real puzzlers at bay for several weeks... so it can’t be that easy! Oh, and locking it back up again requires most of the same moves, in reverse...

OK ... that’s probably enough to confess to at this point, so I won’t mention the latest round of offers from the Karakuri Club ... :-)