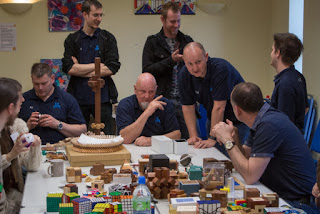 ...no promises about this blog post as I'm now writing it more than a month after it took place - having spent a week in bed with flu in between - this post may bear no resemblance to actual events whatsoever! [But if you weren't there, you probably won't mind as long as there are pics of puzzles, puzzlers and some plausible stories - and if you were, feel free to supplement the post by means of the comment section below! :-) ]

The best-travelled MPP member joined us from Eindhoven for MPP10 and I collected him from the airport on the Friday evening, and we did the usual catch-up and general chatter about what we've been up to and how things were going on the exchange puzzle before I left him in the study with a row of puzzles to play with while I went to grab some sleep.

Next morning we drove through to Warwick a bit before the official start to help set up our usual room for the day... and soon enough we realised we were going to be in for a pretty busy day! Ever since we started using Facebook to publicise our meetings they seem to be getting bigger and bigger - and not just because new people are joining us... Nigel was expecting a larger than usual crowd and there was a bit of a concern that the room might not quite be large enough and we might need to spill over into the open area next to the room where we normally have lunch... in the end we just squashed into the usual room! 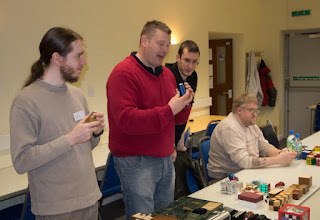 After we'd got the room laid out properly and unpacked our offerings for the day I laid into the coffee for the first time of many that day - in fact I generally find myself snacking and drinking coffee most of the day at these gatherings... in between puzzling, of course!

Before the meeting Louis had told all the Revo-guys to bring along a Revomaze that they could solve (not in one of Neil's nice clear sleeves!) so at some point he began asking them to take out their Revo's and open them, at which point he took a pin and sleeve from them, turned his back for a minute or so and then handed them their sleeves back with a new white core inserted and duly locked in place ... he'd caught me with one of those the night before so I knew what was coming but it was awesome to see the looks on folks' faces when they realised what he'd just done...

He'd designed his own maze core and had a bunch of them 3D printed by Shapeways and rocked up on the Saturday and basically dished out a copy to everyone who'd give him a sleeve and pin - nice bloke, eh?  [I had a go at solving my copy a while later and it was great fun having a real, honest new maze to play around with - using a pencil on the core I could map out some of the things I thought I might want to avoid and that showed me that Louis has a bit of a mean streak when it comes to designing puzzles... Thanks Louis - I really enjoyed that!]

MPP10 did see a notable first with a presentation and someone actually making a speech - as it was Oli's final MPP as a bachelor, some of the guys had colluded to design and print a three-piece burr (Frank's design and Steve's 3D printing) where one of the pieces was in the shape of a heart and Frank wished him well on the next exciting phase of his life on our behalf while several (nameless!) hecklers suggested that was the end of his carefree days spending all his spare cash on puzzles and toys...


Satomi and Scott set up a table heaving with some lovely Japanese goodies for sale and I managed to snag quite a few little things that I'd been hoping to get at some point at some very reasonable prices ... and it was great to see the pair of them wandering around and playing with some of the puzzles they hadn't seen - we may well turn them into puzzlers yet!

Steve had brought a copy of Whilemina Wombat by Brian Young and Kevin and I decided that would be an opportunity we couldn't pass up ... Kevin did most of the work and every now and then when he thought he'd hit a dead end I'd fiddle around a bit and stumble across something potentially useful. Between us we managed to work out the main mechanics of the little beastie, having discovered a couple of tools and found places to poke them, usefully - and before long we'd managed to dismantle her - ultimately finding the mini-wombat inside.

Putting Whilemina back together was another story entirely... we found ourselves somewhat snookered when the leaves (a pair of little silver leaves held together by a ring) had to be put in place and then a few moves later we discovered that they'd moved, courtesy of a little magnet, and they were now effectively stopping any progress - either forwards or backwards ... there was a little cursing, some sweating and plenty of imaginative prodding and tapping before we finally managed to get things going again. We reversed our steps and put the leaves where they should go, only to find ourselves in exactly the same dead end again... cue more sweating, cursing, prodding and tapping before we managed to get them out again - at which point we decided they would be given back to Steve separately rather than risk going through that again! Leaves omitted, she went back together fairly quickly... Of course all the while that we were struggling through that, Frank was helpfully pointing out that one of his Whilemina's has been lying in a box in bits for years because he can't get it back together again - thanks Frank - real encouraging! Great fun puzzle to work through and really glad to have been given the chance at one - thanks guys!

Rich amazed us yet again - having demonstrated his mastery of several extremely high level burrs previously, this time he grabbed an 11*11*11 twisty cube from one of the cubers, scrambled it and then sat himself down at a table and proceeded to solve it - from scratch - while enduring all sorts of taunts , mainly from the non-twisties among us - and it didn't seem to take him that long - so we've decided he must be in league with the devil - it was pretty clear.

Later in the day in spite of what had happened to Whilemina, Steve goaded Kevin into having a bash at his copy of Cutler's Crooked Box #2 which in spite of its name looks more like a ball made up of notched planks - Kevin had no trouble taking it apart, but putting it back together was a little more troublesome ...

Several times he had the two main bits assembled and just had to place them together to complete the assembly and then something would go slightly awry and he'd start again ... of course at this point Steve letting on to everyone else that with an extra hand or two it's really quite simple, but strangely nobody volunteered the extra hand as we didn't want to rob Kevin of his sense of achievement (!) and he did manage it all on his own, and he was chuffed!

... a short while later when Steve was packing up he realised he didn't have enough space so he just dismantled all of Kevin's hard work ... and I'm hoping Kevin didn't see that bit after all his hard work!