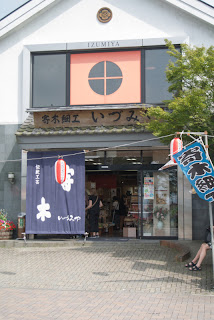 After having breakfast with Rob Hegge I spend a little while in the lobby catching up on emails before Scott Elliott arrives with a bunch of his printed puzzles and we explore them for a while (I manage to assemble them all, much to my own amusement!) before I rather rudely excuse myself, dash upstairs for my bag and sprint off to the waiting buses outside the hotel... today we're heading for Hakone, aka Puzzle Mountain - for some serious puzzle box shopping.

I find myself next to Stan Isaacs and really enjoy the bus ride getting to know a wonderful gent and a terrific puzzler. I pass him a copy of Cast Cylinder and my little yellow burr and they amuse him for a while as we travel through increasingly more beautiful (and less urban) countryside until we eventually climb up a steep, winding mountain pass and crest the ridge before dropping down into the picturesque town of Hakone. 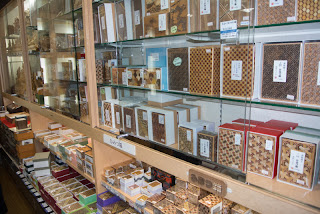 While the bus is parking we spot Frank Potts with Brian and Sue Young waiting outside what turns out to be a shop most of us will recognise from their web-shop - Izumiya. My first thought is that given the head start that the three of them have had, they've probably hoovered up all the best stuff, although spotting a 3 foot kumiki robot in the shop later on makes me doubt that, as I know at least one of them kind of likes kumiki puzzles! 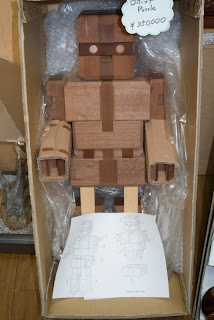 Before we're allowed off the bus the house-rules for puzzle-buying during the first half an hour are explained to ensure that everyone gets a fair chance to buy something special - being a wimp I hang back from what I'm assuming will be some heavily competitive shopping inside and spend some time looking through Mine's stall set up outside the shop. I pick up quite a few puzzles from Mine that end up becoming some of the puzzles I spend the most time on during my stay in Japan ... and a copy of his Design Competition entry for this year, only I don't realise it at the time.

Once the rush has subsided I venture inside and find a throng of puzzlers at the back of the shop (the front of the store has everything imaginable decorated in yosegi and the puzzles and cabinets are at the back of the store). I spend at least an hour ogling various puzzle boxes, playing with (even solving!) some of them, watching demos of others and pawing even more of them before I make up my mind on a couple of things to buy ... only to return to the store three or four times later during the day to pick up just a couple more puzzles each time.

From Izumiya we wandered up the street to Maruyama and a couple of other shops that stock puzzles. Maruyama has a terrific collection of Karakuri boxes in a glass display cabinet that takes up most of the length of the shop - great for ogling at, while a craftsman shaves off wafer-thin slices of yosegi from blocks on his bench and passes them out to visiting puzzlers.

Hakone really is a treasure and anyone interested in puzzle boxes should visit at some point...

In between puzzle shopping, lunch was a couple of Oreo ice-creams - Gill wasn't there so I was allowed!

After lunch Stan and I wandered around town a bit and found ourselves seeking some shade down by the dock on the lake, watching swan-shaped pedalos gliding around the bay, and huge tourist boats taking folks around the lake on a sight-seeing tour, while an elderly lady in a rowing boat was trimming stray plants in the basin in front of us - it's a magical place even without the puzzles...

A couple more visits to Izumiya took care of the rest of the money I was planning to spend there and as I was leaving the store Kenzi comes out from the back of the shop with a Dream of Zebra. When he spots the look on my face he quickly hides it behind the counter and says "Sorry, not for sale!" - I don't bother hiding my disappointment and even ham it up a bit ... but it really isn't for sale. 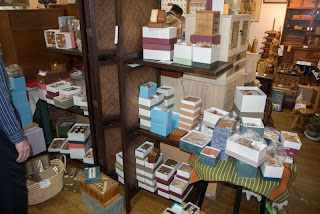 The long bus ride back was broken for a bite to eat at a motorway services - although given its size, it's probably better described as a small shopping mall attached to a massive food court next to a motorway. I suspect that the break allows the worst of the traffic ahead to clear and we end up back at the hotel at around 8pm.

This time there are many more puzzlers in the hotel lobby - and I recognise fellow-blogger Jerry Loo from his pictures online while he's chatting to Wil so I interrupt them and introduce myself.

After a quick shower I head back down to the lobby with puzzles in hand and join a rather rowdy crowd of puzzlers including Brian and Sue, Frank and Jo and Jerry. Dick is entertaining Jo's son Dominic with some of his disentanglement puzzles and after discovering that Dominic has solved the Cast Devil, Jerry Slocum insists on shaking the young man's hand and congratulating him...

Chinny arrived in style with a sack full of goodies including a set of Pennyhedrons I'd bought from him and a copy of Bite Me! We passed them all around and pretty soon I was the only bloke there who hadn't solved them, although in my defence, some of them held Dirk and Rob up for a while ... and at least one of them is a Chinny special - it's glued together! 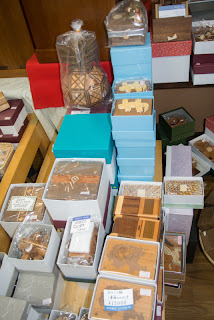 Marc brought out the Reincarnation box that he'd bought in Hakone and I tried - spectacularly unsuccessfully - to get anywhere on it. A bit later when I saw how stiff it was, I didn't feel too bad - gorgeous looking puzzle though and looks very special when it's opened.

Marc also brought out his copies of Alles Roger and the Lighter and soon enough just about everyone was shaking it like a maniac and I'd managed to nudge him into solving Alles Roger.