[It feels like ages since I actually wrote a blog post about a new puzzle... time to set that right!]

Wil Strijbos has been talking about his latest puzzling epic, the Angel Box, for some months now… he started by telling a rather roundabout tale about a trip to a strange building in Helsinki. He followed that up with a 3D drawing of the box itself, along with a classic Strijbos throwaway comment about the fact that the drawing gave absolutely nothing away – a fact I can now attest to! 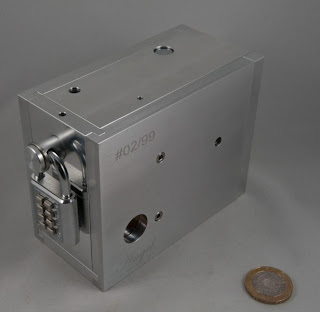 A while later a picture or two of a prototype found their way to me, along with complaints about the difficulty of getting his manufacturers to make all of the changes he’d asked for – and a short while later he was jetting off to China to sit down with them to go through all of the details in person. That trip seemed to have been successful, as a little while later I’d heard that Louis had been introduced to the latest prototype and had pronounced himself impressed, but not before suggesting one or two little tweaks…

Wil mentioned the impending release of the Angel Box many times during the course of IPP 33 and soon after getting home from IPP I got a series of emails covering the background to the Angel Box and some instructions / warnings with a request for some advice on how best to phrase things, so I had a bash at making sure that he’d got his message across properly (that’s fine for the background stuff, but how do you write instructions for a puzzle you haven’t even seen yet?!).

A few days later I got an excited email from Wil to let me know that he'd shipped my Angel Box and later that week it duly arrived - just in time for a self-imposed long weekend - how's that for timing! Knowing I had a 4-day weekend ahead, and remembering Wil's advice ("There's no rush! Take your time...") I decided to explore slowly and ended up spending around two and a half hours puzzling on and off during the course of the Friday before I managed to solve it - and it immediately became one of the favourites - it is a terrific sequential discovery puzzle...

The first impression is that this is a serious piece of heavy metal - it weighs around 2 kilos and you REALLY don't want to drop this on anything precious, like a toe. The box appears to be made up of a series of aluminium panels, some of which have different sized holes in them, one of the sides has a little porthole through which the angel (your goal) can be seen.

At the start there is nothing to be done aside from trying to remove the digital padlock attached to a sprung rod - the lock seems to be holding the rod in place so it sort of makes sense to start there... 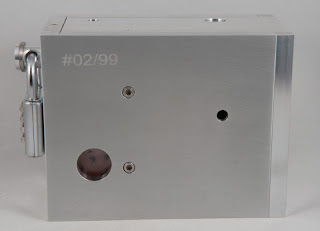 Helpfully the padlock has a code plate attached to the shackle and a little bit of fiddling gives you the code number - which you punch into the lock with an air of hopefulness, only to find it doesn't open... perhaps the buttons need to be the other way round, so try that - nope! OK, so this is Wil we're dealing with, it was never going to be that easy... so we need to pick the lock - easy enough, it's binary with 8 buttons - so there are around 256 combinations... but a bit of thinking will help you reduce that quite a bit, and you're off and picking and eventually you'll get the lock open...

Right, we're off... only that sprung rod doesn't actually seem to do anything but bounce in and out when you prod it... Oh, and it turns, rather freely. Not useful either...now what?

At this stage the real voyage of discovery starts when you find some interesting "tools" - even though they don't look like things you might find in your toolbox... closer examination of the sides of the box and those holes in particular shows that some of the tools might fit in those holes, so we start playing a bit. At first three of the holes are "interesting" so I concentrate on those and fiddle around trying to work out how they interact with one another and at some point the fourth hole becomes rather interesting as well... once you work out what to with those, you're rewarded with the top plate opening and just as you get your hopes up, it stops...giving you a tantalising view inside the box, looking down at what appears to be a jail cell of the cute little angel.

There's a few more locking mechanisms to understand and defeat before you can get the top of the box out of the way only to find that the angle is now locked up inside that little cell in the bottom corner of the box... and in order to release the angel you're going to have to dismantle the box a lot further.

There are several more discoveries along the way and some neat little mechanisms that are beautifully disguised. This puzzle keeps on letting you think you're getting somewhere, only to laugh at you and make you realise you've just peeled off one more layer of the onion. 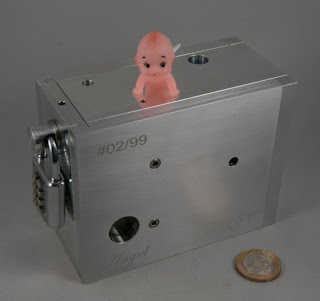 Wil's paid a lot of attention to the details on this puzzle and in spite of the warnings, you probably won't lose any of your tools, unless you're very silly indeed... it's beautifully made and it keeps on giving and giving - even the final step to release the angel still isn't quite the end of the puzzle ... in the bottom of the angel's cell there's a personalised note with a further quest - but I'm not going to spoil that one for you - you'll have to follow that one yourself.

I really love this puzzle - there are multiple interrelated layers and it rewards and teases you all the way through. There are plenty of tools to discover and some wonderful "A-Ha's!" when you find something useful to do with them... it's a good, solid puzzle that you won't be afraid of passing around at a puzzle party.

Wil's first batch of around 30 sold out in a couple of days and the next batch is on its way, but he will be limiting production to 99 Angel Boxes - if you like sequential discovery puzzles you will kick yourself if you don't play with one of them.
Posted by allard at 22:23